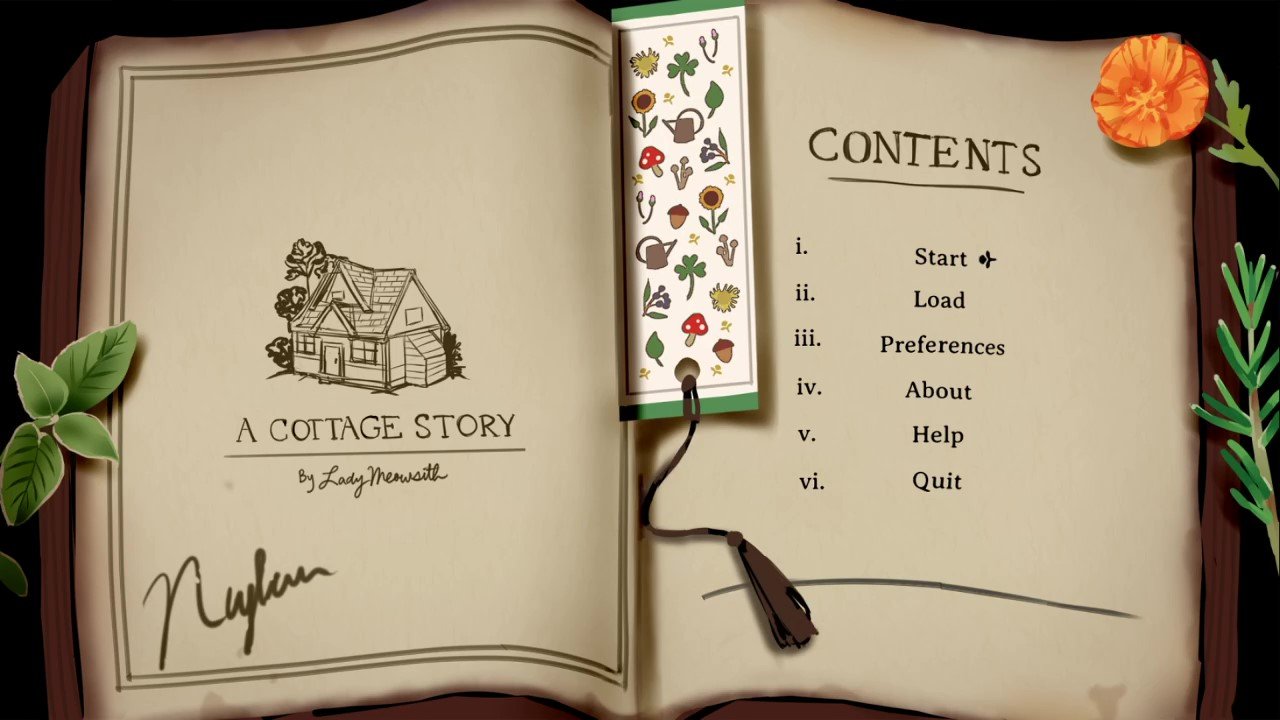 A Cottage Story is an indie fantasy-style visual novel currently in development by indie developer LadyMeowsith on itch.IO. The theme is what is described as, “Cottage-Core.” You’ll play as Emory, or whichever moniker you choose.

Your form is selectable as well. You are a human/changeling grown up far away from humans. You live within a fantastic forest of goblins, satyrs, elves, and maybe more. Meet characters and treat their ailments by mastering herbalism and healing skills from herbs found in the forest. Participate in the story or personal fulfillment in this stylistic story/dating sim.

A Cottage Story: The Cottage

So, you’ll start off the story as a human, lost in the woods, stumbling upon a magical-looking cottage in the grove. Knock on the door, you encounter Emory, the main character. You’re incredulous and bewildered, and it starts with a gag involving the outhouse in the cottage from the start. Obviously, this game is meant to be amusing, and it is. Michael, the human, or whoever he is, disappears into the woods after a tussle again and regular life in the cottage begins.

It’s a humble abode, rife with books, comfy seats, a fireplace, and herbalism knickknacks strewed about. As a former utilizer of herbalism, literally, and herbalist remedies, I could smell the lavender and tea most likely pungent in the air. There used to be a nice herb shop in my neighborhood that I’d go into for remedies. I’m not a naturopath or anything, but I have had a lot of success with herbal remedies over the years. Admittedly it has been a while though.

The first raucous scene is when Emory’s goblin friend stops by during the human’s visit. She thinks he’s an intruder so she goes into combat with him and starts flinging herb knives as he dodges around until an escape. The music is very suitable and familiar but I can’t place it. Klafka the fearless mushroom-hatted goblin scuffles with Michael the human for a scene, and the music twinkles as if it could be a fantasy world benny hill motif. It works. I’m not totally sure what goes into scoring music for a visual novel, but it’s really suiting, and I try to pay attention to game music when I play new games.

Over the course of the first act, you’ll learn much about your character, her/his arrival in the water as a baby after being nearly drowned. Rescued by a godmother. I accidentally skipped over a few scenes, so I’m not totally sure what the whole background is, but she ends up under the care of a godmother who taught her everything. It all feels sort of ephemeral because you are the protagonist but it seems that everything is a bit mysterious. As a trained reader, I recognize these clues to a larger story arc and interesting developments in the story later on.

Things are pretty laid back in A Cottage Story. There’s a good friend who is a Satyr and you two talk about books. The dialogue is thematic for a fantasy world yet contemporary and amusing. I really liked interacting with the characters.

Go Get It Now

I really love anything that would call itself “cottage core” as this game does. If you know me, you may have seen that at one juncture of life in the city, I had a Victorian-style apartment that I decorated in steampunk/borderline-wizard décor and furnishings. I loved that place, and then I hated it, but now I miss it. I so desired to have a hidden little treehouse cottage in the skyline and was totally serious about it. This emulation appeals to me.

This game is only a demo, but it has just opened up Act 2. I only played Act 1. My section seems a bit introductory, though it is clear there is a lot planned. I played for around 50 minutes, so I suspect there are around 2 hours of gameplay in the current demo alone! If you want to play it I have the information below.

If you are fond of games that are thematic but heavy on character interaction, might I suggest A Cottage Story? This one is really fun, and I’m pretty certain you’re going to adore the art.

Lately, I’ve been pumped to start developing my own VN, but I’ll cover more of that another time. So, I’m going to leave this review right here! Thank you for reading MrDavePizza.com, and thanks to all you devs who keep making excellent games. I try to review every day, but you’re welcome to look around everywhere and see what else is here!

Here is the link to the A Cottage Story developer’s itch.IO page and demo download. The demo is free but donations are encouraged!

The Last Friend is a Great New Game With Dog Buddies Out NowDecember 3, 2021
Scarlet Hood and the Wicked Wood is Weird But GoodApril 8, 2021
Subscribe
Login
0 Comments
Inline Feedbacks
View all comments