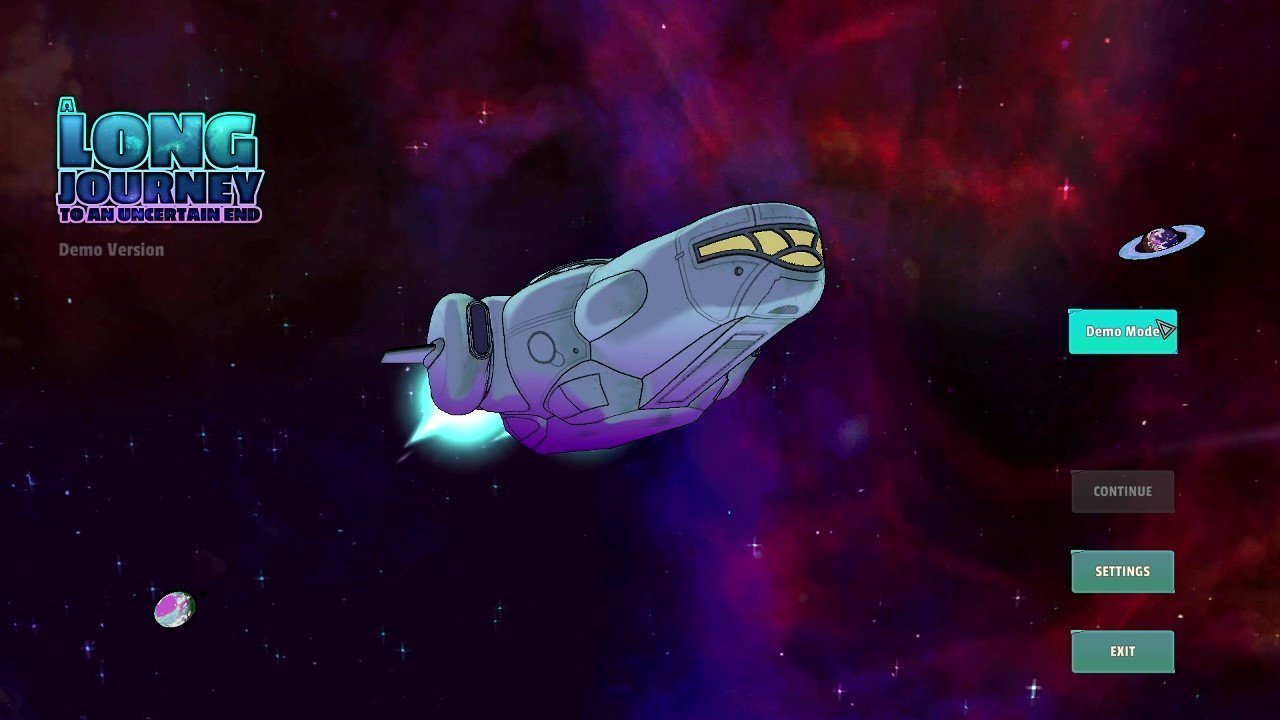 Scoured Steam for ages looking for anything that caught my eye. My shortwave is all fuzz today. It must be a solar storm and a celestial body in retrograde. But it’s not, the dishwashers running and it’s just a slow week. So, I took forward to Itch.IO in the hopes of some nice dev gems out there and sweet demos. I hit the motherlode. Thank you GameDevites.

A Long Journey is such an amazing collection of genres, it’s holistic in its approach. We’re talking space outlaw, contractor, story click, and adventure. The art is beautiful, the design is brilliant, and well, this game is one to keep an eye on. And it’s getting a major boost from a major Kickstarter success, so expect to see it further developed and probably make it to full release.

A Long Journey: No Moon Boots, No Service

Not only that, but it’s totally amazing looking and has a very inclusive and comprehensive character creation screen, including gender and pronouns.

Set the scene, I’m waking up like an android that badly needs a cup of joe. I was awakened by a holographic corgi named C.O.R.G.I.

I don’t know the origin of this corgi AI yet, but he’s adorable. I’ve loved corgis since the days of Cowboy Bebop, an anime about space bounty hunters, but not the more popular bounty hunters in space from other stories. Connection? I don’t know. Their discussion seems to show up regularly in weird places.

It’s a comfortable way to start a rough and tumble course. I chose Pizza as a name, my default character name, and Spruce McGoose as my ex. Any resemblance of actual people is entirely coincidental.

Not much involved in the tutorial, but it’s super intuitive and does the job. The way you respond to questions determines the outcome of your story basically. There’s not a lot of background given, but it’s obvious that the protagonist is a criminal in some sort of galactic crime. What it is, I don’t know. The story becomes more complex before it reveals anything though, and I spent most of my time hiding on a desert planet and space station.

There’s a lot in this game that’s to be admired. For ages, I’ve thought about a novel I wrote in my teens, and how it would be interesting to turn into something. As I play these games day by day, seeing what’s possible in the game dev universe, especially visual novels, I get excited. A Long Journey nails the aesthetic I think I’d go for with that book.

Once you make it to the first hideout planet. You occupy your time and progress the story by doing jobs for locals in exchange for money, resources, whatever. There’s loads of content in these jobs.

I would never go so far as calling this game a clicker, but it has some similarities, that are expanded upon way better. The way jobs are run reminds me a ton of the follower quests in WoW WoD. I’m sure they have some more obvious root that I can’t think of.

For the sake of seeing more of the game quickly, I also noticed it’s not too difficult to just click through them. There is quite a bit of more crucial discussions that occur too.

With the way the design site on itch.IO says the choices you make determine the story, they certainly do with these conversations, and I saw no discrepancies otherwise. This is a seamless experience.

I once said that I don’t think we’ll ever explore the galaxy, especially in our own lifetimes, but I’ve eased up on that belief since then. Yesterday, the Space X return to landing rocket was in the news yesterday, and who knows. I don’t want to be a space cowboy, but some people call me Maurice… uh never mind.

Shoot For The Stars! ✨

If you want to check out this game, it’s currently in early demo. It looks pretty slick though, and it’s a good title for gamers or devs just to see what’s possible.

If you enjoyed this article be sure to check back for more demos or more timeless reviews on MrDavePizza.com. I can be found on most social media sites, and I welcome your interaction. Thanks for reading.

Here is a link to this game on Steam Store: https://store.steampowered.com/app/1164830/A_Long_Journey_to_an_Uncertain_End/

Stories From Sol is a Meticulously Crafted New VN REVIEWSeptember 27, 2022
What Comes After is a that New Mystical Interactive Fiction REVIEWJune 28, 2021
Subscribe
Login
0 Comments
Inline Feedbacks
View all comments