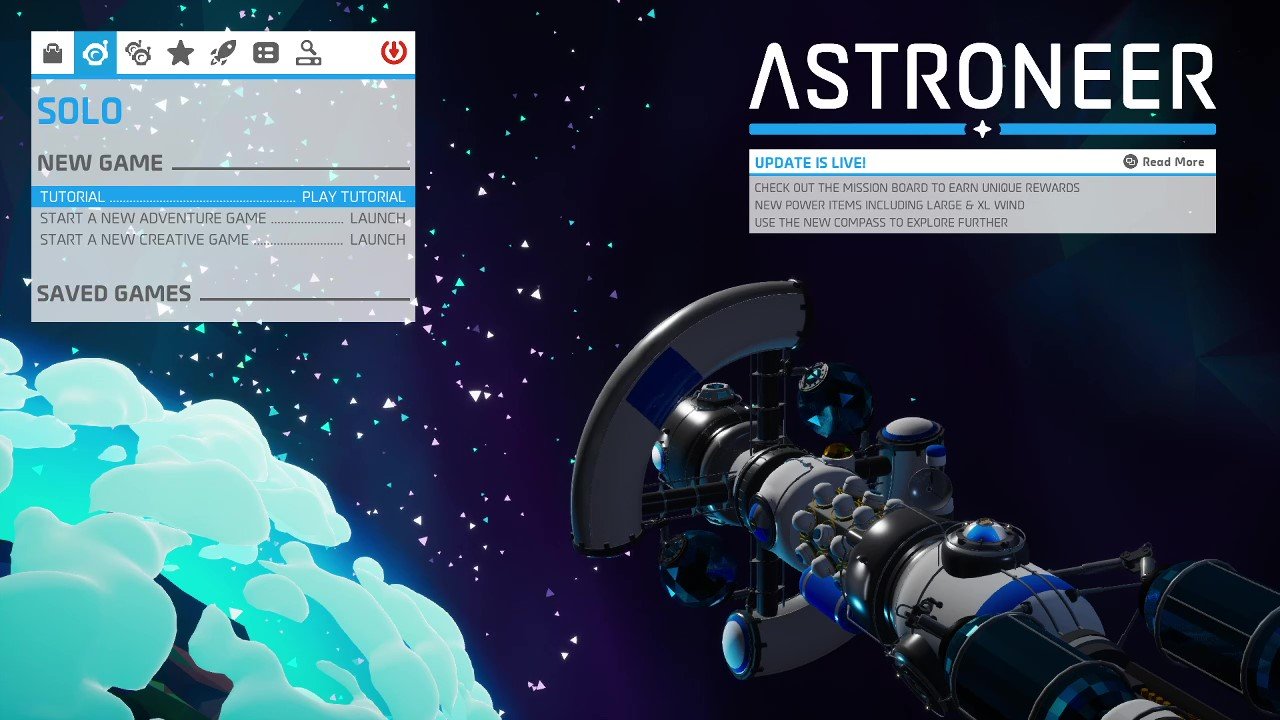 Astroneer is a low poly space sim with a playful and colorful, stylized atmosphere. It uses its practical fundamental mechanics and graphics to pull off an engaging and creative experience.

After completing the tutorial on your basic tools and resources available, the game is essentially an open-world sandbox where you can develop your base camp or head to another planet. It is similar to games like The Outer Worlds and No Man’s Sky, without realistic graphics and more emphasis on casual, puzzle-solving gameplay. Today, I’ll take you through my experience with this game.

I’ve played through the tutorial for this a few times before since I’ve always wanted to explore its depths. It is a very engaging and interesting intro to the game. Before I cover everything though, heads up, this game, or at least its tutorial, expects you to find some of the answers on your own at times! This can be, and I’ll be gentle here, a little confusing.

Each step requires a bit of experimentation up to self-performed research for some of the game mechanics. Personally, I had to regularly run a search engine for parts. It’s not intrinsically difficult, but you should know about it.

Basically, it’s not a totally self-transparent tutorial and I got confused even up to this last experience with creating a generator. I have figured it out before though, so don’t let that deter you. It is very fun. Everything can be looked up online.

There is a lot of information at the Official Astroneer Wiki, if you need to look something up. Think of it as a bonus that this game has so many features, a wiki is out there.

Okay, moving on! This game appeals to all my gameplay aesthetics. Yeah, you could make a planet blue and green, purple and pink, or each or both, whatevs. This just looks so amazing though and was a major reason for my interest in it. Low poly is a wonderful way to go in a sandbox environment, and when applied like this–stellar! (In addition, it’s a tad easier on system resources in my experience.)

Also, the sound effects and music are very pleasant. Various interactions make sounds like bubbling beakers or fuel injectors, whatever that sounds like. I didn’t know what vacuuming up polymer sounded like, but now I do. I know this seems like a trivial thing to mention, but all the zooms, shhhs, and beeps are part of what makes sci-fi space stories a nebula of fun.

One of the important tools in Astroneer is the terrain tool. You use this to mine minerals and other materials, or to manipulate the terrain for whatever you want from it. There’s no delay if you want to just dig a giant cave in the ground, it only takes a moment. It’s a nice way for first-person click interaction, and it is surprisingly dynamic. Where games like Minecraft operate on more of a block terrain model, Astroneer has a little more curvature. It’s pretty fun to slurp up some rock and build a ramp to a new area in elevated mode. It can take practice, but it does everything you need it to.

There’s no question that this was a well-developed game and that it has set itself apart from other visual styles, but it sort of outdoes itself by marrying art style with explorative 3D gameplay.

I’m in the process of tying my space game reviews together into sort of a theme here at Mr. Dave Pizza. One thing I keep asking myself is, what role do these games have in advocating real space exploration? For Astroneer, I believe there is a lot of value in a major concept in the game which is the modularization of open-world space exploration.

You see, this game does something great. When you first start exploring you’re only given a few tools. It is in essence, a survival craft open-world game. Thematically though, since it is in space, it’s even better. You can create any sort of modular space equipment you need, including shuttles, using what you’re given and a landscape filled with resources. There are many many resource types–and things you can build!

If you don’t see my point: did you know that the international space station now uses a 3D printer to print tools they need for maintenance? (FACT)

Certainly, this is a game, and you can’t just find every mineral popping out of the ground while you slurp it up on every real planetary surface. There are minerals scattered throughout the actual cosmos though, and there could be a margin of productivity when we make it to Mars or back to the moon. If we end up spending much time exploring the surface, there will be plenty of attention dedicated to this I’m sure.

It’s not anxiety-inducing as a game at all; pretty peaceful. If you make it further than I have, you might even make some friends (co-op is available, although I haven’t tried it.)

A moment spent looking at the Steam page will reveal that there are many amazing things that can be accomplished in this game, especially after you develop a reliable launch system. Some of the examples out there will probably make you doubletake because there’s quite a bit of opportunity to explore. I am sure they are rewarding though.

Well, that’s it. This game is unique in the way it can have such vast options, yet leaves me with humble approval for what it’s given me. I have actually made it past the tutorial before. This game is scientific in the way that the deduction of your information and resources is crucial to progress. And once I figure out how to eliminate the need for tethers, it’s on!

Thanks for reading this review on MrDavePizza.com. I review a variety of games, mostly indie or games in development, and lately, I’m into space games, but I play what interests me. So, if you like what you see, feel free to look around and read as much as you like. It’s free!