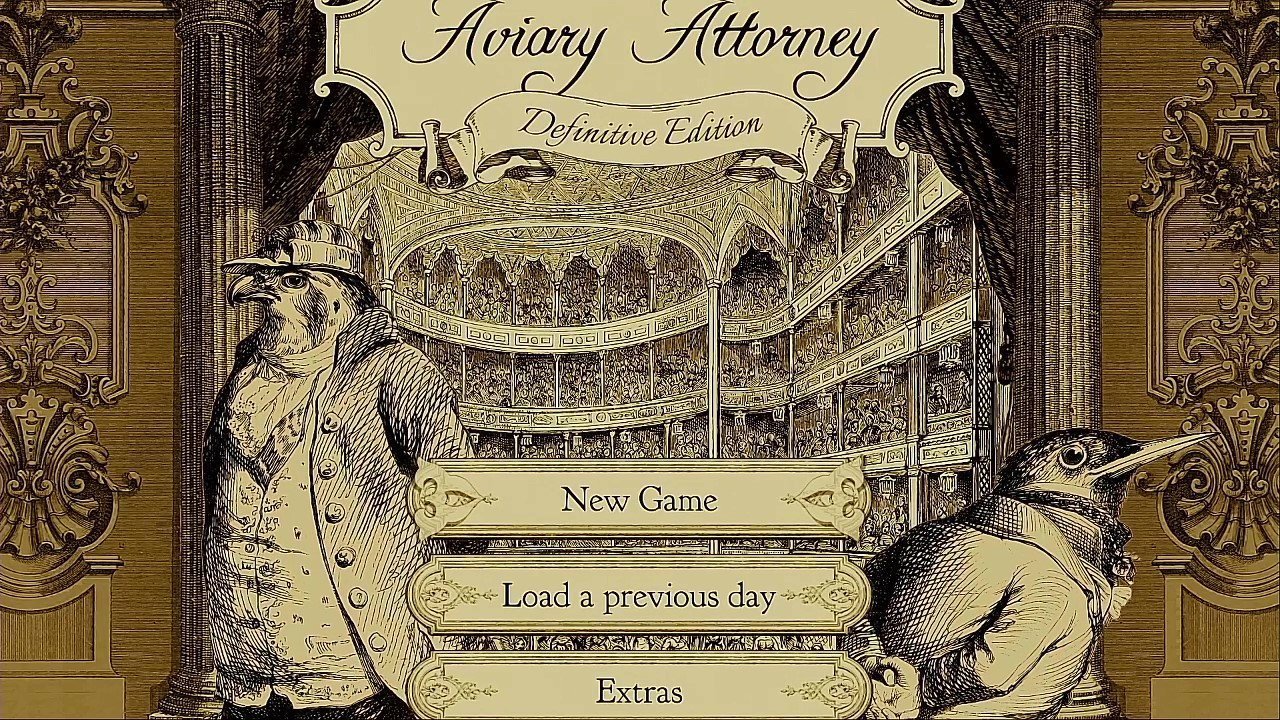 Greeting from cloud cuckoo land, I’m your host, Mr. Dave Pizza and I’m the author of this review of Aviary Attorney. The special today is hrmph. So, I’ve been scouring catalogs of games looking for something that suits my current appetite. I’m having a really good run with a few visual novels, but I am hopelessly novice to them.

Yet, I was flipping through lists and it occurred to me I had this one game from last year that I intimidatingly withdrew from out of sincere oversight. The game is good, really good, and I have been getting my feet a bit wet since then in all genres of the land, really wet, like the snow literally melted faster than a snow cone in the desert. Yeah, we got some weird weather, but anyway, I have found a great game to talk to you all about.

Aviary Attorney is an interactive hand-illustrated, historical detective fiction that takes place in the earlier half of the 18th century in France. In it, every single character is an anthropomorphic animal inspired by the caricatures of J.J. Grandville. It is also chock full of jokes.

Technically, Aviary Attorney is more of interactive fiction than a visual novel, but the same elements are there for all. Caption boxes, blipping dialogue bloops, visual eye joy, and a generally directional plot.

Aviary Attorney starts off with an introduction to Holmes and Watson themselves: Falcon and assistant Sparrowson, legalese sleuths. This allegory is almost spot on, and it’s perfect.

In addition to the literary theme, the illustrated characters and locations in the game are grandiose and divine. These images are as well-suited to the story as they are in the real locations they take place in.

I wasn’t totally sure if this was all within the actual city of Paris or if it is similar. It’s not really important to know, but you might ask yourself the same thing when you look at the map.

Aviary Attorney: Who To Trust…

We’re soon aware quickly via post to seek out a lady cat character named Caterline. She has been implicated in a murder, so Falcon and Sparrowson are hired by her father to represent her. She tells the duo that she was at a party which was the location of the incident and tells the circumstances involved.

Amusingly she describes a photographer who takes pictures, which definitely could be evidence. When Falcon asks what a photograph is, Casterline describes it as a box with a hole in which a small bug paints a photorealistic image of what it sees within a few minutes. “Technology is amazing,” says Sparrowson, which totally cracked me up.

There is definitely some humor in this game. I have to say that Sparrowson is probably my very favorite. Yeah, I already love sparrows, but to see Sparrowson as… well… a bird brain! I love it! His lines are gold.

In one conversation during my gameplay, he describes his idea to catalog people he knows in a book with pictures of their faces, descriptions, and information. He calls it “Face Book.” There is also a hilarious moment where he describes a tweet as bird-to-bird communication. Haha.

The investigation gameplay that went on in the first act of this game was pretty good. It is important to investigate as much as you possibly can. You’ll be asked to use the evidence you’ve gathered in the courtroom when you are defending your client.

Which is actually pretty fun. I suppose if you were a legal wiz or historicist it might already sound interesting, but it is very thrilling to make an educated exhibition of your evidence in this game. It’s kind of on this tightrope walk of contemplating if you know where your line of questioning is going with knowing which responses or rebuttals you may make. It’s not impossible to slip up. It simply affects the story though as far as I can tell.

It’s Good, I Rest My Case

There’s really no need for a walkthrough in this game, because it is fun enough to play the game however you want, and I enjoyed that. I did not manage to play every option there was, but if you enjoy a game, replay value can be nice.

Supposedly this game might have its roots in a game called Ace Attorney, but from what I’ve seen this is a totally different “beast.” (or fowl)

I will not spoil anything for you in the event you decide to check it out. But it is worth multitudes, it is a masterpiece, and it’s worth whatever your time if you want to investigate crimes with hilarious antique bird lawyer characters.

If you enjoyed this review, please stop back again, I frequently update. And thanks for reading MrDavePizza.com. Have a look around!

Scarlet Hood and the Wicked Wood is What I Played Today REVIEWApril 8, 2021
The Hayseed Knight is an Awesome Accomplishment REVIEWMarch 5, 2021
Subscribe
Login
0 Comments
Inline Feedbacks
View all comments