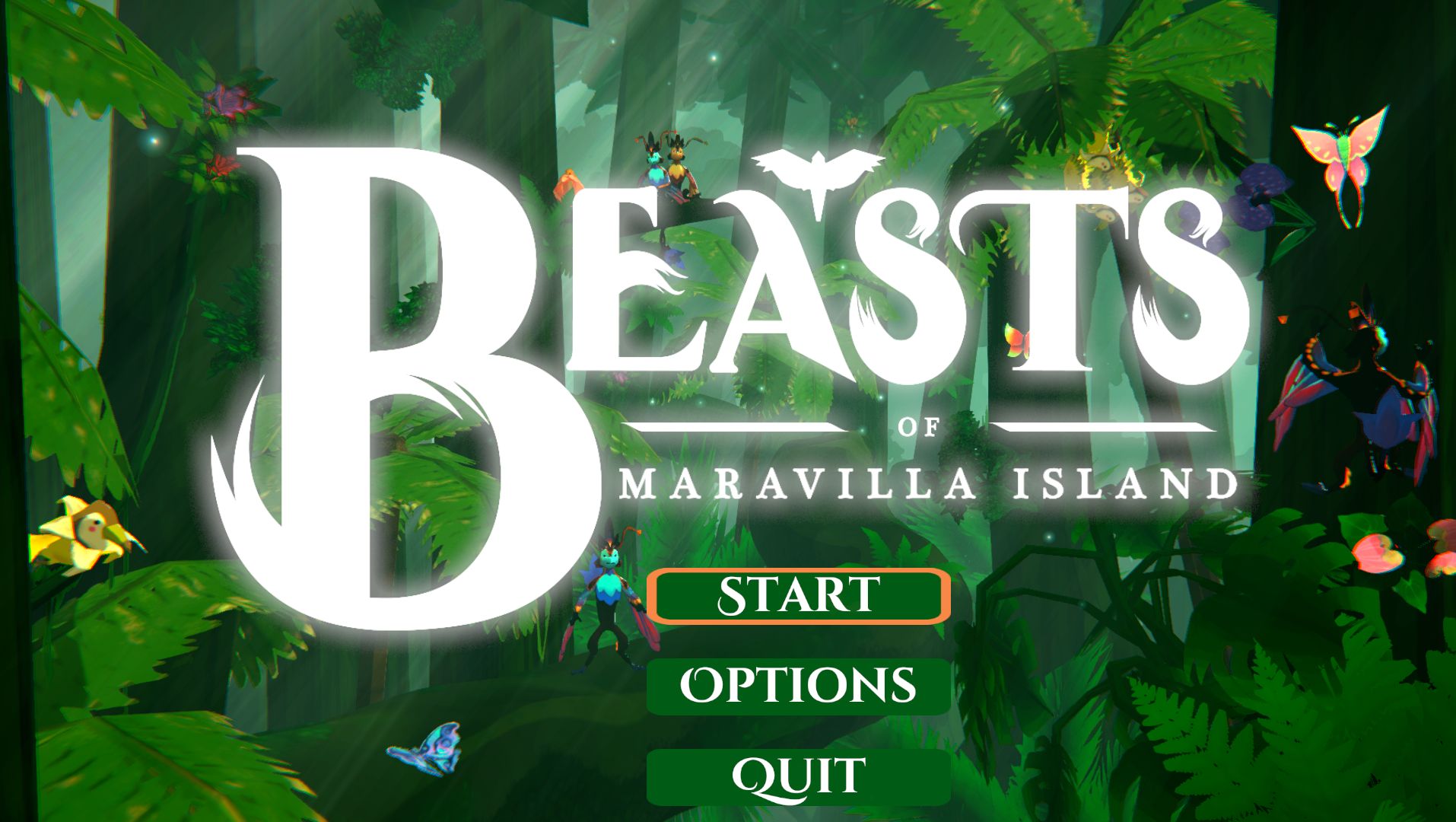 Beasts of Maravilla Island is a mindful and progressive concept revolving around the science, hobby, and storytelling of isolated ecosystems and their sometimes astonishing, in this case even magical, discoveries. It’s a game about collecting documentation and exploring the flora and fauna of an environment, where combat or violent interaction is non-existent.

I wish I could say non-violence in games is more common, but games are still in the formative years of non-violence, even conceptually. I do not mean to sound judgmental in any way there, since combat is a reliable game mechanic. There needs to be more variety for everyone though. And that’s one thing that’s great about this project.

It is my pleasure to introduce you to the subject of this preview, a project in development by recent graduates and current students from the University of Southern California Games Program, Cal State Fullerton, and Art Center. This is based on a demo and is part of an unfinished project. That said, let’s take a look.

Here’s a run down. Beasts of Maravilla Island is a fantasy biology concept where the goal is to explore an island that is introduced within the backstory of your character’s grandfather, who once documented the island. This ecology happens to be a slightly magical one, which bolsters the gameplay as enchanting as well as purposeful.

I have tried not to hyperbolize my preview of this game because it is still being developed and I do not know everything about it. I know it is not simply a Gulliver’s Travels excerpt but I know it has some themes I’ve seen before.

You’re equipped from the beginning with a camera, a photo book, and a journal. These tools give you the character a way to engage with your environment. It’s not the first time a camera has been in a game, and that’s fine too. It doesn’t have to be. I really enjoyed taking pictures of the animals and seeing their species names pop up when I got them in the frame.

If you read about this game’s mission, the non-violent interaction with the animals in the island is totally crucial to its development. They say on their website that they want to give players the opportunity to explore and interact with animals in a natural game environment without harming them. Not too hard to get behind that idea. I have no problem saying this, please be nice to the animals, okay? And yes, more animal-friendly games are the way to go.

Beasts of Maravilla Island: You Don’t Have to Catch them All

I’m not really into Pokémon, not a ton at least, and I’m not going to criticize it either. That is not the Dave Pizza way. But this game reminds me a lot of the original Pokémon Snap. The animals in Beasts don’t combat each other, but snapping animal photos around Maravilla Island is pretty similar to that game. A familiar mechanic, perhaps unrelated.

Many indie games are now creating all sorts of spinoffs of the classic Pokémon genre now like Temtem, Ooblets, and more. And I’m fine with it. We get it, it’s a formula that works! Don’t get too worked up on this similarity though, many games are similar to many other games in any way, it is what makes the world go ’round.

You start off on an island and wander around, and take photos, whilst referring to your grandfather’s journal. You categorize your findings within a photobook.

It’s pretty simple at this stage. Based on their website, I can tell that this is going to be fleshed out quite a bit more. There’s a lot of consideration put into the art and animal names already though! “Vasconian Tree Orchard.” It rings the authority of a biology game dev already.

One thing I thoroughly enjoyed was the ability to climb up stalks and walk around the animal habitats up in the tree. With a whistle, birds monkeys called “binkeys” by your character, fly into their nests. The music is acoustic and jungle infused for a delightful jaunt.

There’s not really too much in the game besides this. I attempted to backtrack and got stuck, so I stopped there. But I spent a good run exploring the island though, taking pictures. I was a bit negligent of the photobook, but I tried that too. There is more information from the team on what else lurks within the island. And I’m sure it is exotic and alive.

I’m not into cultural ultimatums, but I see some interesting trends that might be opening people to alternative new gaming experiences from the indie dev culture.

This past year, this inertia built time, and people are breaking out of the convention to survive… for fun. We want to create our own magical narratives.

I think it’s totally rad that these recent graduates and students are collaborating on a creative game concept. And I want this sort of thing to happen a lot.

Check out the demo on itch.io, and check out their website too. I think this one will probably be developing into a more thorough and intriguing development stage soon. Good luck!

Thanks for reading. To read about more games go to MrDavePizza.com or check out my linktr.ee for social media links.