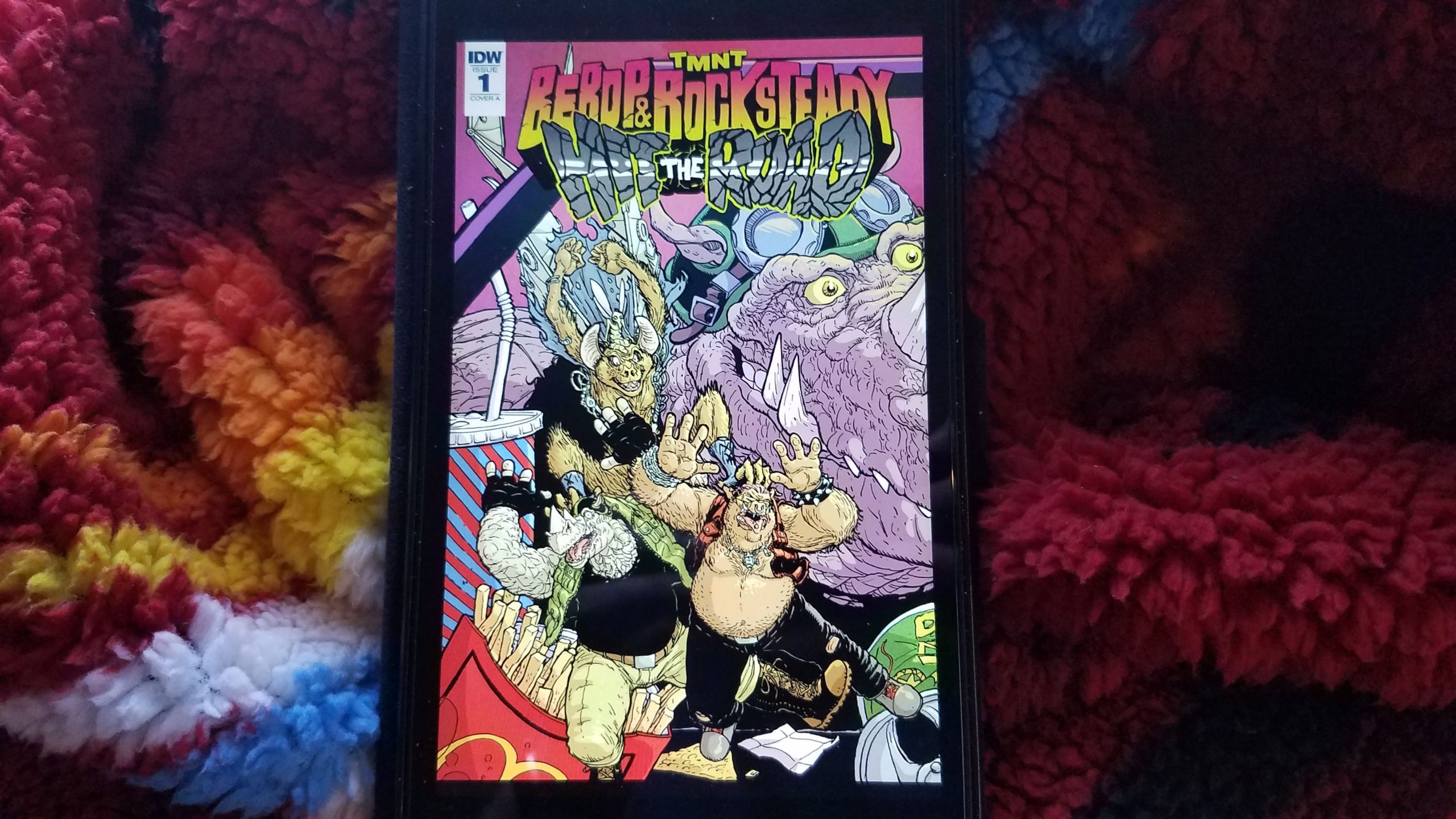 Well, I guess this review is going to be a trial attempt at an idea I’ve had. It takes me days to churn out a full volume review, which I don’t really mind or anything, but it’s nice to just pick something up for about the length it takes me to create solo dev showcases. Anyway, whatever, so today I’m taking a look at Bebop and Rocksteady Hit the Road Issue 1. I have to confess, I thought I was reading Bebop and Rocksteady Destroy Everything, which is an entirely different series apparently. This one is good too though, and Bebop and Rocksteady’s dimwitted fully loaded antics are just as good here as they could be anywhere. Anyway, my idea here is, instead of trying to conquer every individual volume collection, I can taste a bit of everything for you and provide a swath of curated comics. So, let’s go

Blast ‘Em: A Brief Intro to Bebop and Rocksteady

The first thing to set straight right away is that originally, and probably still, Bebop and Rocksteady are villains in the sprawling spinoffs of the Teenage Mutant Ninja Turtles. As I recall, they work pretty closely with Shredder and Krane, but they’re sort of bounty hunters or something, I think? Their notoriety goes in hand in hand with the fact that much like the turtles, Bebop and Rocksteady are mutated animals fused with human individuals. It’s pretty obvious because Rocksteady looks like a rhinoceros and BeBop looks like a hog.

They differ from the turtles most obviously in the fact that they’re not really as coordinates as, say, ninja crime fighters! Actually, they’re kind of daft and over-the-top destructive and I guess violent really. They serve as comic relief though, always turning up as brute stooges. This comic is pretty violent–and weird–way beyond the original TV show. It didn’t really bother me though, although there’s a weird plot with an ear that was just a little shocking! Good comics are usually at times over-the-top, it just drives the story. I never claimed I can’t write about it! You’d have to see it for yourself though.

I don’t really know where or what this picks up from, aside from maybe the Destroy Everything series, but I’m not sure. One other character describes their vehicle, which by the way is totally awesome, as not fitting into this timeline. Then there’s a cryptid hunter, a mutant bat, and some extradimensional janitors. I have no clue what is going on, but I liked it. There’s also a plotline about Rocksteady slowly turning into a human, that ends deep in mystery. This almost runs as a subplot, but it’s pretty concerning! There you have it though, and thus the reader picks up issue #2.

Also, the antics of the two serve as a muse with their idea that they don’t want to be villains anymore, too hard, so they’re going to become heroes. They entertain this idea, which by the way occurs as they drive their convertible across the desert of New Mexico when they ferociously but kindly introduce themselves to “Razzmatazz,” a cryptid investigator. Or at least that’s the name he adopts when he decides to join their team.

There’s also a side story about a giant blonde woman who organizes a military briefing about Bebop and Rocksteady, although that serves as a lead-in into a future plot I guess.

It’s pretty weird, but fun to read. There are several bizarre details for you to find on your own when you read this. And although I know this since it’s already been released, it seems like a decent series. The beauty of this idea of reviewing single issues I have is if I want to/need to continue to this series, I can pick up the next issue, or I can move on. And also helps me so I can catch up on the backlog so I can be ready for new releases! I’ll do my best!

Thanks for reading Mr. Dave Pizza. See you next time.

By Night by John Allison and Christine Larsen: Volume 1: Review

BOOK: The Zen of Zombie: Review