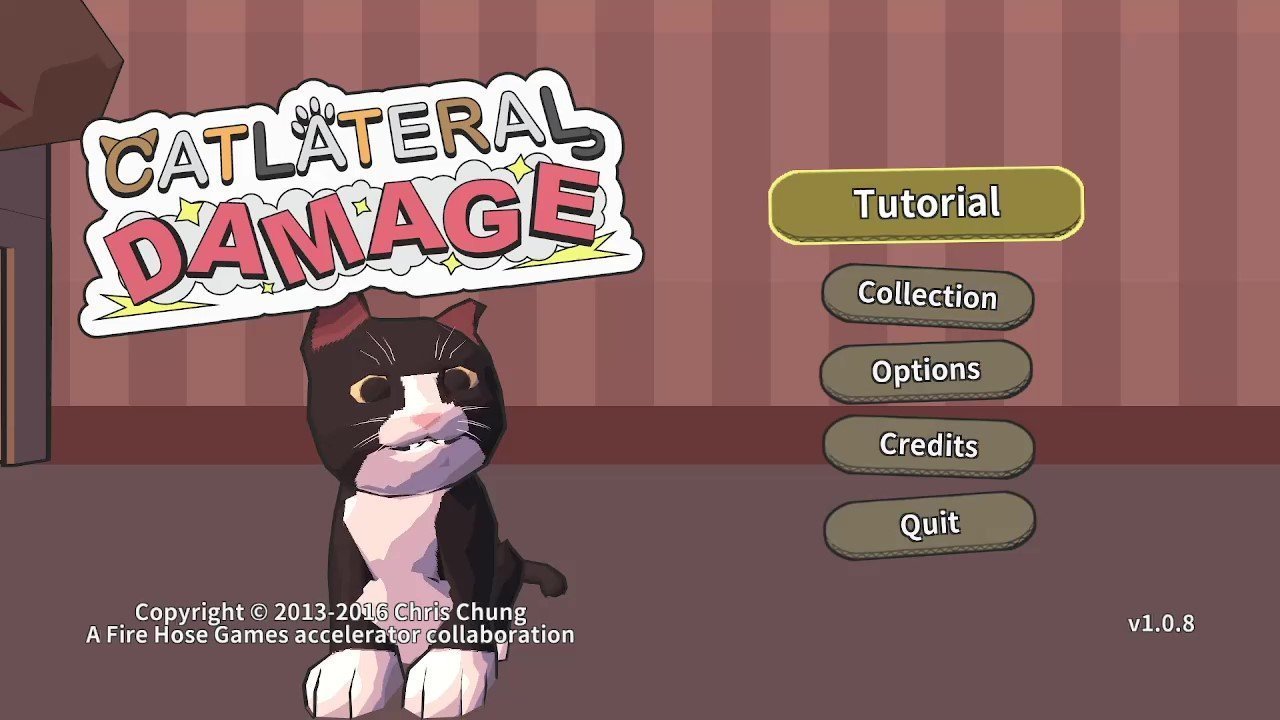 Catlateral Damage is a game from Itch.IO that is so simple in concept, but so enjoyable that way! I also know it is time for another review! This game is part of a bundle I obtained and is one of many great games over at Itch.

The game is about you, a cat, in a playground suitable for the mischievous antics of a cat. The objective of the game is to knock stuff off shelves, chase red lasers, and collect power-ups. It is very amusing and a great game for anybody because it is challenging and ready for an audience.

This game reached out to me today. We’ve been doing some cleaning around the property and have been nursing a small black kitten that is inhabiting a cupboard in our garage. The mama is around, but we’re not totally sure what’s going on. As animal lovers, we’re hoping for the best, but hope they can move on. Have you ever been in a situation like this? It seems to happen every few years in some locations.

Anyway, that’s my anecdote. This game is pretty cool though, really. It’s essentially all low-polygon graphics with levels/stages of assorted belongings of a nowhere owner, but plenty of ledges to jump around and hit stuff. It works beautifully with a controller, which surprises me. Quite regularly, I’ve been impressed with controller support in indie games, even the solo dev projects.

This game was up there with my Sky Rogue download in terms of indie games that are full-blown production quality. Not saying anything against dev status, but this is what a dev product can look like! Normally I might be hesitant to give a game like this too much brainpower. But I really enjoyed the comedy of features beyond simply swatting stuff over, although that is fun too. For example, an alert came up on my screen to kill the red dots. Obviously a joke about cat lasers. Sure, enough there were little, glowing, red dots popping up on the floor and I chased after them.

The tutorial was pretty good and will prepare you with everything you need to know. Generally, there is either a progress bar and a countdown or a list of objects to knock over. There is also a “litterbox mode” which is a very pun-full take on sandbox gameplay. It is primarily the same, but you can choose a cat to be and there is no countdown.

I’m really happy with this game. I don’t really rate games, but say I do: this game is 100/100. It’s promoting itself through charity, it’s cute, it’s funny, and it takes some skill. Yeah, this game rocks!

Thank you so much for reading MrDavePizza.com! If you enjoyed this article, please have a look around. I write about a little bit of everything in terms of genre. Most are quite cozy and suitable to curl up to though, so have at it!

Oh, also, this game has been around for ages (since 2015), and I think that is wonderful! It feels like a dev, but it’s very polished. Fun for everyone!