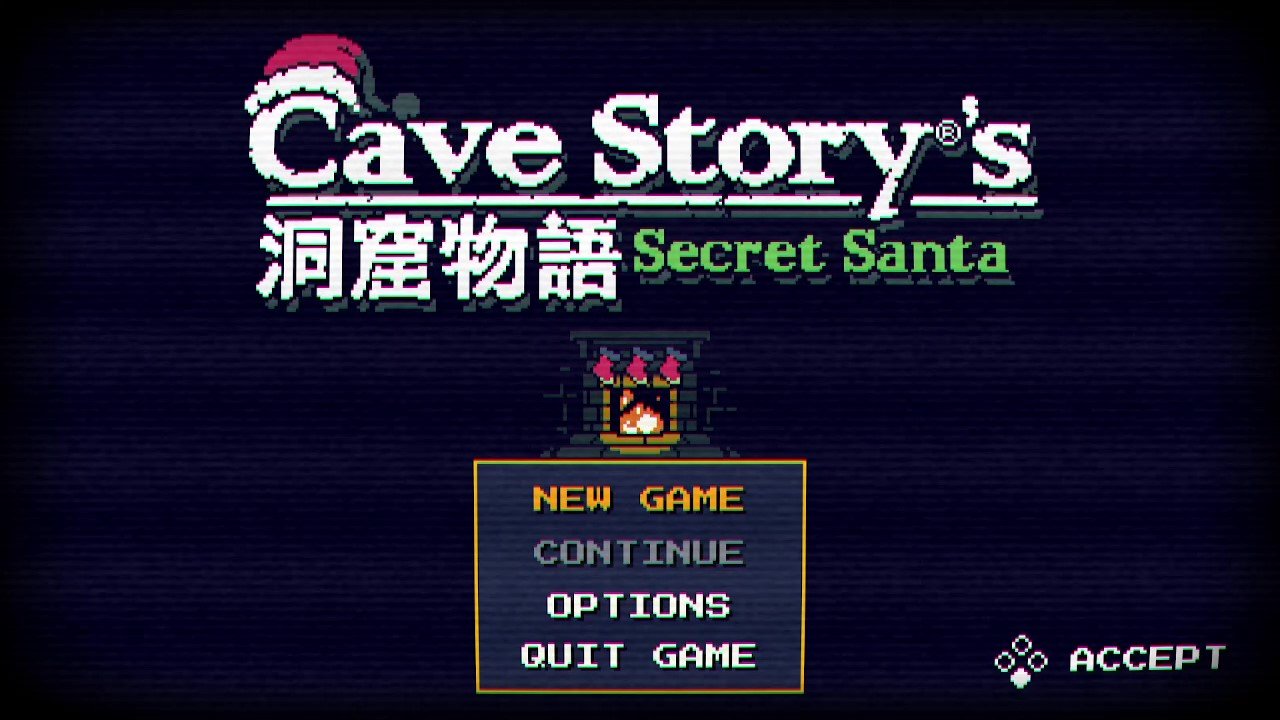 I don’t know a darn thing about Cave Story or its balrog, but here’s the deal. In Cave Story’s Secret Santa You are a pixel art Santa, the presents have been stolen, drop-in through chimney’s in a diverse world to replace the presents. There’s a catch though, booby traps and sentries line children’s houses, which you must stealthily avoid or risk restarting. It’s a pretty low-key game and is bound to be one of the best Christmas-themed games I’ve every played (today…)

Oh, yeah, by the way, there are no doors! You must use the chimney. That is a nice touch. Oddly enough, this game is more authentic to the Santa RPG experience than any other game I have played. Usually, some dev makes a game like this, and it’s like, oh crap, I only know how to code doors, so Santa rolls in on a 3D sphere or something. Sorry, not teasing, I’m just saying, that’s how it is. This is a pretty clean-coded game–however, there is something weird about sneaking around by getting closers to the walls so that you kind of blend into them, hmm. Oh, also, Santa isn’t really Santa in this story, but you really don’t even need to know that.

Christmas is easily one of my favorite holidays. I’m not really into commercialism, but I like decorations, warm food, and drinks, and ah darn, I like commercialism too! When I was a kid, I really wanted to be Santa. Ninja Turtles are fun, but Santa is legendary. Actually, the Santa-made-for-TV movies and TV specials were amongst my favorites. The Santa Clause with Tim Allen was probably in the top 5; I love the way that movie was made. Then, Elf. Ernest Saves Christmas. Oh my gosh, I can think of so many, probably need to start a movie marathon here.

Cave Story’s Secret Santa is definitely an indie gaming crowd-pleaser, though not necessarily indie. I’ll have to investigate that. Pixel art RPGs are free on Steam and scream indie, but y’know, the only rules are there are no rules. Every once in a while these legacy studios come out with something totally new. It reminds me of when Toe Jam and Earl released a game on Switch. You don’t have to know much about this one though. Even I know Cave Story is a classic.

As you can see, this is pretty straightforward and cute. I didn’t play too much, because it’s fairly repetitive. It’s frostin’ free though, and it’s fairly well made, to be honest. It does involve some sneaking, but c’mon, Santa is a rogue ninja-class present deliverer folks.

I’ll need to investigate some other Christmas games this winter, but it’s feeling promising. Now let me return to my nog. I need to think for a while.

Thanks for reading Mr. Dave Pizza. I hope you enjoyed this, it was a nice treat for a subtle/humble gaming morning. Be sure to check back soon, I’ll be updating with more, and probably more Christmas games if I can find them. Have a Merry Christmas. Here is a link to Cave Story’s Secret Santa!