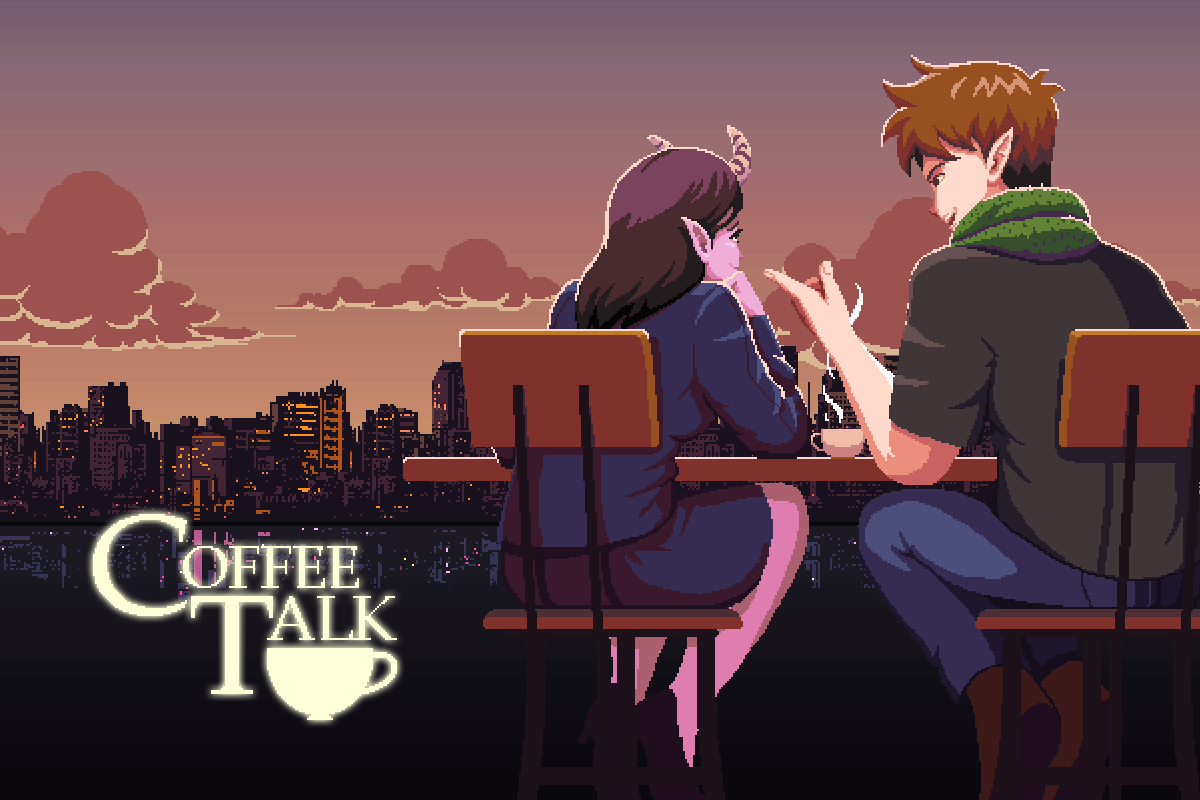 Coffee Talk is an interactive visual novel released in the pumpkin spice season of 2020. You play a barista in Seattle in a futuristic/alternate universe. Your customers range from humans to succubus, and it is your job not only to make them coffee in your coffee shop but also to help talk them through their personal problems. The gameplay is interspersed with actual barista beverage making with various ingredients and you can even make latte art. The game art is also enjoyable and has a high-quality direction in design.

Oh yes, this is the game I need. Yesterday, I drank entirely too much coffee leading to palpitations into the wee hours of the morning. Whoops. I’m also a professional. No, literally, I used to be a barista for a time in my life, so I’ll take you through it.

Grind Your Beans in Coffee Talk

I’m glad that I’ve finally gotten around to playing this game. Partially this is because my taste in games has shifted quite dramatically since the first time I saw them from high-res co-ops to pixel art visual novels lately. About 30-minutes to a couple of hours is usually as much as I invest before I try a new one, which is simply because I want to cover new games, but sometimes I want to play games a lot more. And usually, that’s because I just really like the game. I like Coffee Talk.

This title is indeed indie though it seems like it had a pretty popular game release when it came out. I think perhaps we were entering a new territory there as gamers and the attention kept shifting to giant games like 2077, Valhalla, and others. There was also kind of a drought due to delays in production. ALSO, I have only had a Switch since around September. But alas, the time has come and it has found a place in my gamer’s log.

The game starts off in a fairly all characteristics marked coffee shop, sophisticated in design with much attention to detail. I think this is one thing I have liked a lot about Switch indie games, there’s kind of a high standard for design since swathes of people download on eShop all the time. Not that others have a low standard, but when you play a popular game on Switch you can usually guarantee it’s going to come with all the bells and whistles. That said, I have been in many sophisticated coffee shops in the PNW and this one is a very good representation of that market, although it’s fictional of course.

A favorite customer at the shop starts the day, Freya, she’s a writer looking for inspiration, she’s totally stumped. I relate to her already on a very real level. Another couple comes in and they discuss the day and acquaintances, conversation jumping around patrons at the coffee bar. I don’t really know what things are like these days, but a good coffee shop or any establishment is often worth in value how much customers can have a conversation. I’m telling you this.

The dialogue is very good. There’s definitely a gap where it could falter, but it’s very natural and very engaging dialogue. Some writers are hesitant to really roll with a dialogue idea sometimes, but there’s a very good plot in the demo involving an elf and succubus and judgmental elders. Oh yeah, I forgot to talk about that game aspect, the mythical beings as customers, I’d like to see how that theme is explored after the intro. It seems like a Shadowrun kind of thing without all the heavy machinery. Heads up, fantasy characters as neutrals in story plots are something I dig.

One really cool thing I like about this concept is the espresso bar. There is a meter for every flavor note along with a sequence of ingredients, and you can literally do latte art with your controller, neat! Eventually, they said I can either pay for them or stop. So, I just stopped. There’s a certain trick though that has to do with steaming the milk correctly and how you move the pitcher. Most of them were foamy rosette leaves or hearts, but I could do it! Had I spent more time on the demo, I did notice that there is tons of room for practice. It was interesting to me that latte art was equally possible with green tea and I assume cocoa.

I think this game is going to echo in the halls of interesting games for a while. There are no corners cut or hurried storylines. I think this is a game that you could play and actually develop some social skills from it. That’s what I really like to see in games, not just an experience of play (although that’s good), but also an opportunity for personal practice that is fun. In fact, if it’s really good, it will be so fun you might not have to look for it.

It runs around $12.99, there is a demo which I’ve said plenty, but if you’re looking for something to spend some time on and like the idea of being a barista or learning how to help characters through the process of dialogue, this one totally works!

Support your indie developers if you can, and as usual, thanks for reading MrDavePizza.

My Cup Of Coffee: A Visual Novel Review