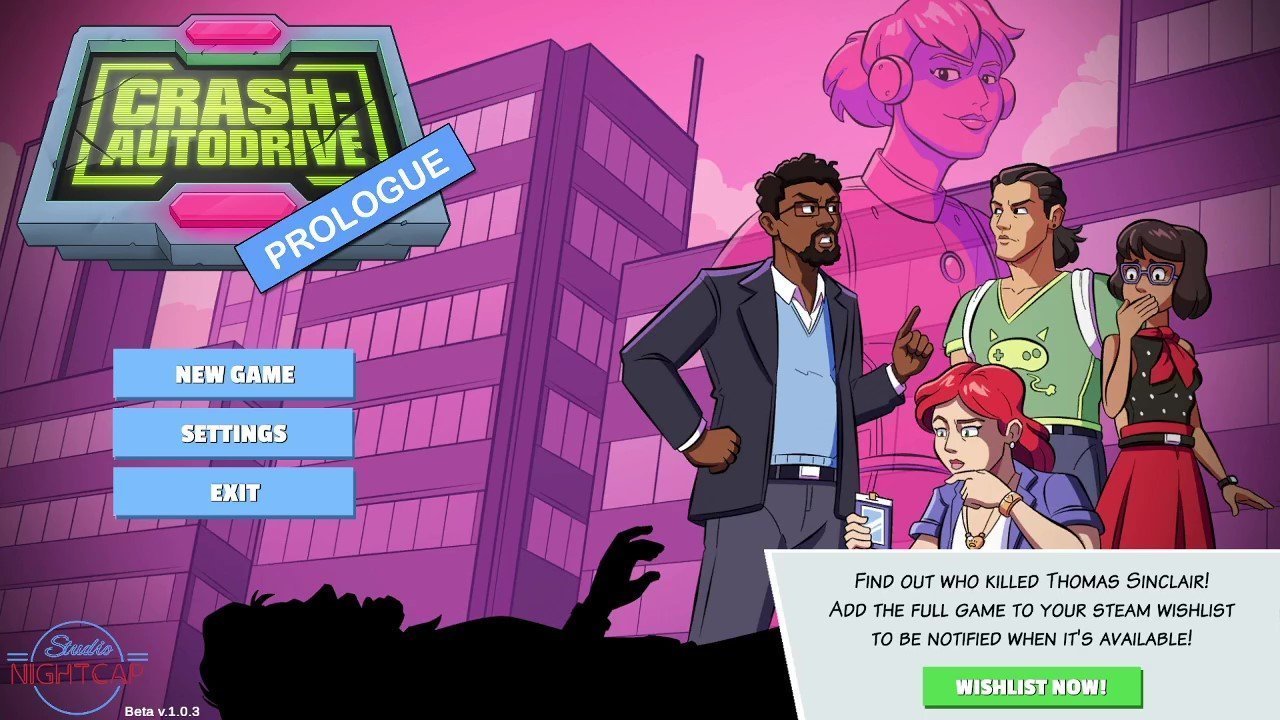 CRASH: Autodrive is a point-and-click interactive fiction that takes place in Pittsburgh, PA, in the year 2027. You are a passenger in a robot auto cab that hosts you and three other passengers on your way to your respective destinations. The car takes an unanticipated detour and strikes a crossing bicyclist on a deserted back road in the city.

With the aid of a host full of clues from your cab sharers, you will use information and evidence from the individual to unravel the mystery behind the crash. In a world where A.I. is everywhere, you’ll have to deduct on your own the implications of this accident. The game is due for release sometime in the spring of 2021.

CRASH Autodrive: Let’s Get to Work

Welcome to another visual novel review at MrDavePizza. I have played this genre of the game constantly for the past few months. It contains enough to engage my curiosity, but enough interaction and variables that there is a rubric I’m able to weigh my reception of games.

If you know me, I only review games that I recommend. While many games can get by on heavy-duty 3D graphics and rigorous gameplay variables, I must implore that a thought-out 2D design style and a unique enough plot can make a game like a visual novel do wonders. And the people who often play visual novels are the ones who make them. Once you find one that strikes your fancy, you’ll start noticing the characteristics of each one.

Anyway, that’s super contextual and I won’t hold up your review.

CRASH: Autodrive’s prologue showed up I feel somewhat recently. If you read the beginning description, you’ll pick up on a few themes that are nice about this demo. One is the uniqueness of the plot. The plot centers around the demise of this character, Thomas Sinclair.

I didn’t learn a ton about him, but obviously, he is this kind of Elon Musk character as the mega entrepreneur of the auto cab the plot revolves around. Elon Musk has discussed creating such a system himself you might know of. It’s also really a step up from uber cabs quite frankly. Anyway, in the game, the auto driver has ironically struck Mr. Sinclair, and well, cut his commute short.

As the story unfolds, Emily (who I guess is the main character?) asks questions of all the passengers to address their findings with them as they wait for emergency services. They’re all a bit selfish, honestly, as they squeamishly vote on who has to check if Thomas is conscious.

While not totally transparent, this might be because the common advice of attorneys is not to interfere with an accident since you can be held liable. This is crazy but true. It seems to be in the mind of these characteristics, but not for certain.

The dialogue in the game ends up taking about half an hour. That’s a massive amount of time to try and deduct the clues of this disaster.

This is explained in this way, the auto cab’s emergency services protocol is malfunctioning so no emergency services are activated with the autocab’s A.I. (which is most likely based on a hologram version of Alexa and Siri.) Therefore you’re simply left to discuss what happened.

The conversation is a little silly but not any more than you might expect from an anime of a similar theme and it lets you explore all the elements of the situation. I rather enjoyed all the different branches of dialogue that were available in the demo. It did seem being more direct was the best way to progress the story though.

The demo pulls the curtains and bows at an appropriate moment, a cliffhanger! I’m not sure what kind of continuance of the plot will occur in the final release. The plot is compelling enough, the art is good enough, and the concept is unique. I think you’re going to like it.

Thanks for reading MrDavePizza.com. I have lots of game reviews here so have a look around if you like!