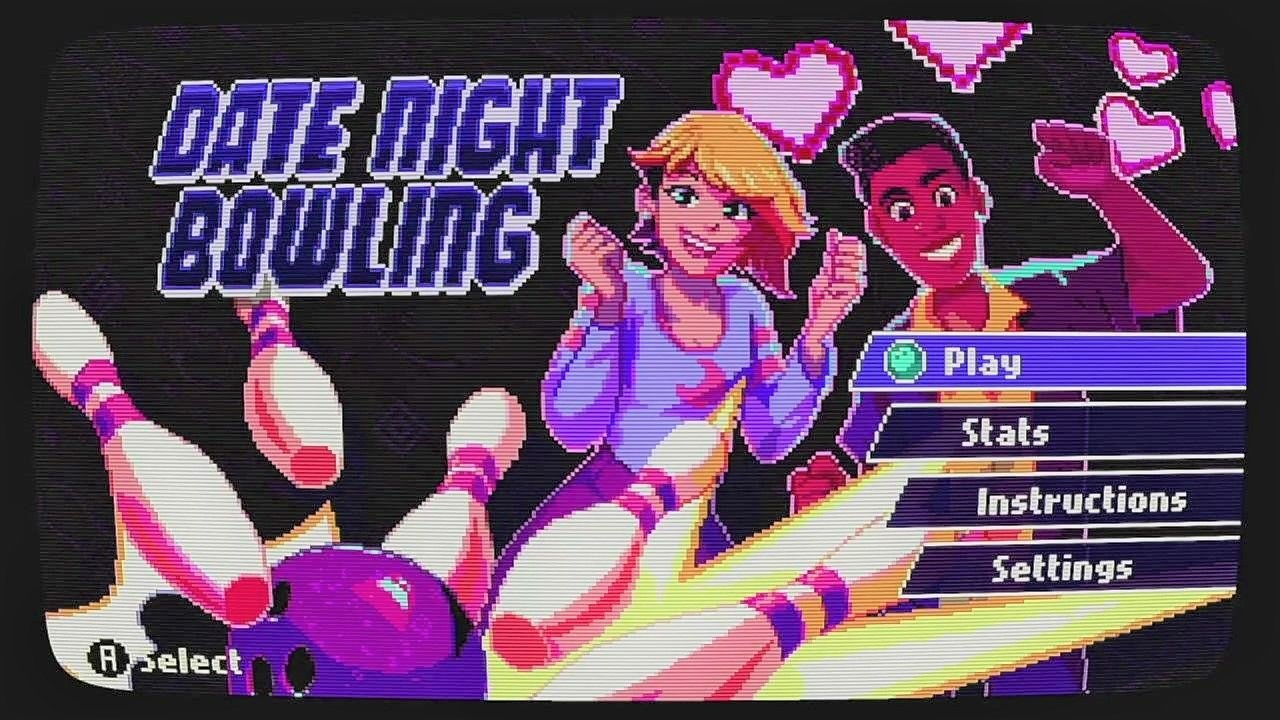 For the record, I am a big fan of Way Down Deep and their dating sim releases over the last year like the socially distanced romance sim Romantic Distancing and the popular release Half Past Fate. I’ve been eyeing Date Night Bowling since I first saw it in an upcoming games roster. So when the opportunity to play it on Switch arose, I snagged it and slipped on some bowling shoes. Eww, digital ones! I jest. Anyway, what we’ve got here is a combination of a very pleasant to look at video game with plenty of replay value and a pretty darn decent bowling simulator for the Switch. It’s about $8 right now on sale. I decided to play through a date and flip through the options, I’ll tell you what I observed here. Overall, to begin with, it’s a good game.

Also, to clear things up, the CRT aspect I’m describing has to do with the fact the whole game uses stylized pixels from an old-style CRT Television! It looks pretty nice actually.

Why Do I Love Date Night Bowling?

I enjoy bubblegum pop colors and superfluous ambient digital lighting, I admit. It’s a nice alternative to games where someone’s head explodes for no reason, but you already know this. What if I told you going on an imaginary date with a stranger at a bowling alley on Nintendo Switch was not a bad idea? What if I told you your date isn’t even a real person? I can’t open the characters selection for you, but I can show you how to get there. The choice is yours. Ahem, thanks “Neo.”

What I noticed in my playthrough for the video is the incentive for the game is really dependent on unlocking characters for different dialogue and abilities. They have stats like power and I can’t even remember the other one, but it won’t hurt anything to play different characters–if you really must play a character right away you can play on a single-player gamer. Actually, I didn’t particularly notice any variation of difficulty in my default choices. It’s basically the same mechanic that has made every game on Nintendo have replay value like Mario Kart and Smash Bros; I guess they’re big on offering those types of games, it’s not terribly unusual for a dating sim though. Anyway, so sorry, just sharing some thoughts there, also I wasn’t a big fan of the default male character despite his harmlessness. Or rather, I wanted to play the characters on the game logo.

You could definitely play two-player on this, in which case I can pretty much guarantee you’ll be able to choose whomever you want.

All That’s Missing Is The Scent of Shoespray

It seems almost nostalgic now. But thankfully, bowling alleys are much cleaner operations now, or so I’ve been told. I took a bowling class when I was in college and I learned an abstract idea of bowling strategy, but it’s probably more an exercise in Zen than anything I think. Of course, the dude abides.

There are neat little breaks in Date Night Bowling. Everything is dependent on the player-controller push when the meter is lit kind of design. In the breaks, you can do things like get a toy out of a claw machine or get something to drink. The bowling can get slightly repetitive (although overall fun,) so these little breaks are nice.

Leave Your Shoes on the Counter

This is a super laid-back, cute game and I think it is worth your money if you like bowling, visual novels, and/or dating sims. I’ve never determined people’s opinions on my article Romantic Distancing, but if you do like that one, this is stylistically the same level of sophistication. Actually, I just realized that Half Past Fate is a different game, I think? I don’t know. This new game has made me realize that I still enjoy visual novels quite a bit and will probably play more visual novels for this site.

On that note, I want to thank you so much for reading Mr. Dave Pizza. Please leave a comment below and stop by again for new content. I’m also on Twitter. I hope you found some useful information in this article and found what you’re looking for! Take care.