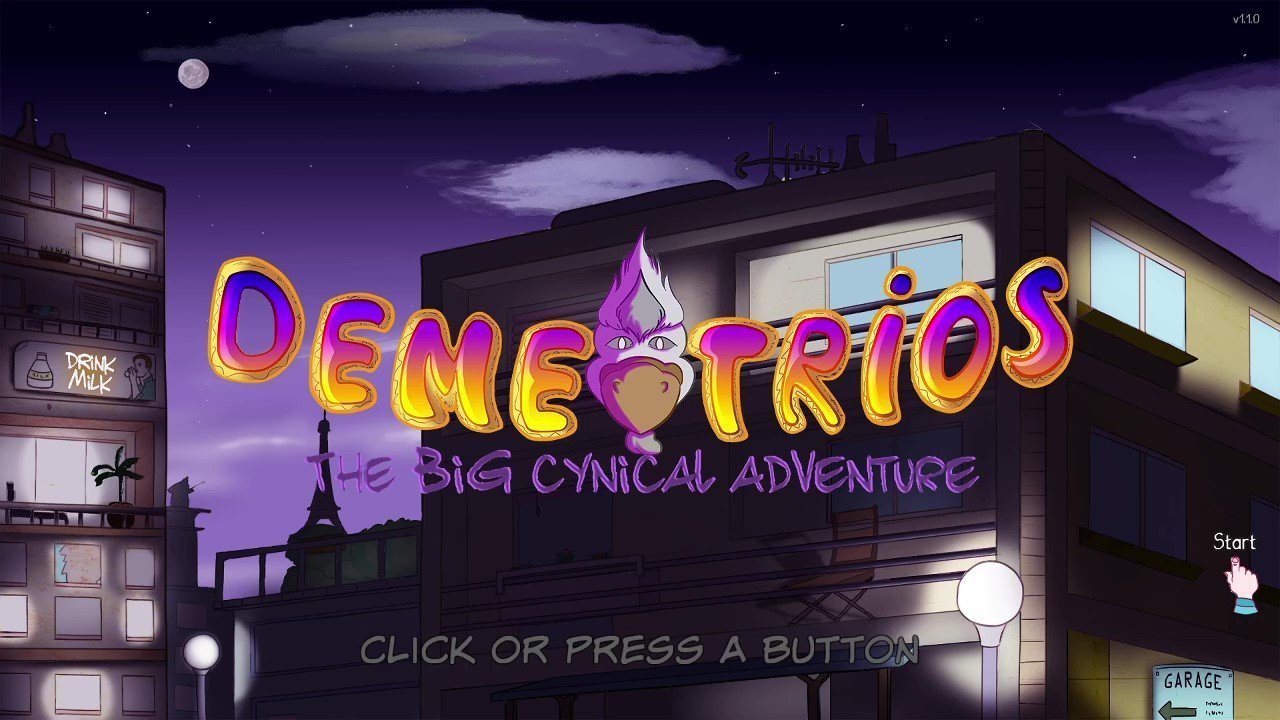 Demetrios is the second title from COWCAT’s indie studio that I have played, the other one being BROK the InvestiGator. My friends, let me preface this by saying although what I present to you are my first impressions from the demo, I enjoyed this enough that I purchased the full version because I am 100% behind this game developer and might very well go in-depth at some near-future point.

Demetrios: The BIG Cynical Adventure is an indie interactive-fiction/visual novel cartoon adventure. The interactive feature is much like you’d see in a hidden object game as well, although clues that you find unlock different possibilities. The story is very comical on purpose and can get as fresh out of the outhouse as you please. Despite this, it is a very well-thought-out mystery story about a complex theft and the clues can leave you curious about what’s around every corner.

This game is a bit old too, I thought I would mention that, but didn’t want to blurt it out. Where Brok is slated for release in 2021, Demetrios has been out since 2016! The two are very similar though with their cartoon-style investigatory creativity. Where Brok features an anthropomorphic crocodile and other anthro characters, Demetrios is very much about a human.

Bjorn is a 30-something antique pawner in a very unusual situation. He arrives home at night from a night of drinking to be interrupted, in his unconscious stupor, by a phone call. “You’re in danger!” more or less. Moments later an intruder is in his Parisian flat and he’s knocked unconscious. And thus, the story begins.

I have only completed the first chapter of this game, but there is about an hour’s worth of content in the demo and even more if you explore everything. Steam says the whole thing is around 8-12. Sacre bleu.

You’ll interact with a cute neighbor that seems to have a bit of a crush, the police at the station give you a hard time when you try to report the crime, as does an ice cream man near your shop, and clues will lead you busting into secret records at a factory in Paris. Where on Earth is this going? New developments are everywhere in Demetrios.

How Lowbrow Can You Go Now?

By the way, this game has what I think is a courteous feature. In the new game menu, you can select three levels of toilet humor from worse to a little to none. It seems like such a silly option, but I appreciate that quite a bit. And there are all varieties of gamers that like to have a laugh or no laughs. I get it. You’re in for laughs either way though.

I find the strapped-for-cash antique shop gig so amusingly perfect. Mind you, I am fond of this topic because I at anything point or another constantly find entertainment in this stuff. It makes Bjorn seem a little less crass than he is.

For the most part, Bjorn is quite the relatable character for me, a college-bound pizza-head. He is not as much of a fumbling dummy as some of the descriptions make him out to be though. He’s a great character because he makes it okay to slip up in a game task. They’re not always obvious.

That’s another aspect of gameplay that I enjoyed in Brok The InvestiGator. The clues aren’t spelled out for you but you can figure them out. If there are 8-12 hours of gameplay you better believe it.

By the way, if you’re wondering why on Earth you should take an interest in this story, there’s a complex plot point of mystery. The intruder I mentioned earlier, Bjorn discovers, stole an antique tablet of some kind from a bird statue. I sense a kind of Maltese Falcon pathos on this one. Screenshots in the preview also make clear this game goes all over creation.

This game is overall nicely designed. It’s kind of like reading a graphic novel. I think you’ll find that games like this are not around everywhere. As I explore this genre more, I want to learn more about them. Is it the buoyantly pleasant illustration, the human touch, or is it mostly a good story. This is no platformer or fps, but it has what I consider a perfect pace.

So, I’m not going to commit yet, but I might play more of this. It has everything I love about this type of game. If I take forever, don’t hold your breath, I live moment-to-moment game-to-game, so we’ll see. But I would like to and I’ll assert that.

If you’re interested in COWCAT’s other project in development, Brok the InvestiGator, that one is linked here: BROK the InvestiGator: Prologue: This Croc Rocks It’s a whole lot of fun too.

However, this goes, thanks for reading MrDavePizza. Feel free to look around, and come back now y’hear?