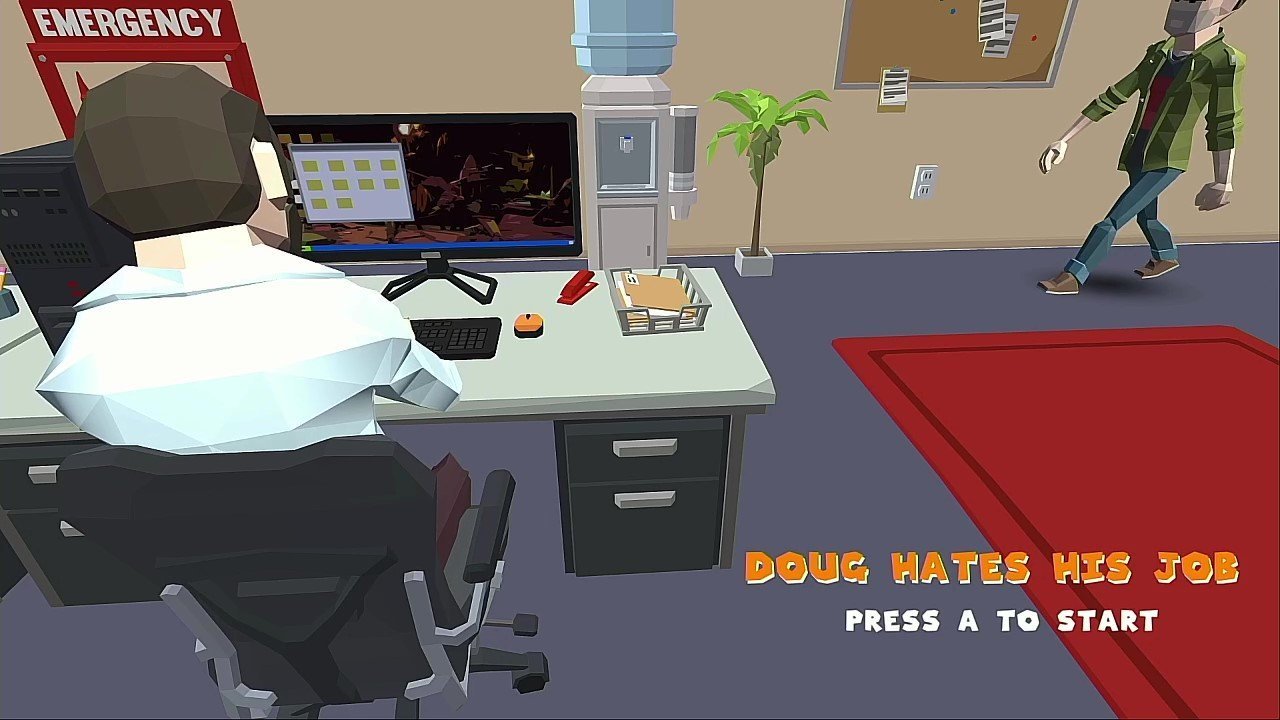 I was provided a review copy to check out an independent dev game from Super-Villain Games for Switch called Doug Hates His Job to be released on Nintendo Switch on March 5th, 2021. I’d like to think it’s because of my skills and not my pizza body that I was hired for this task. But it was probably my pizza bod. Just kidding, THANK YOU so much!

Remember the classic film Office Space. It was created, by genius Mike Judd in the 90s, about a man named Peter who hates his job and is hypnotized to stop caring about it. He does all sorts of crazy things like patronizing his demanding boss, breezily hiking up the corporate ladder into a management position, and raises by doing nothing but smooth-talking the downsizing reps.

He creates a massive scheme with his co-workers to skimp the company’s accounting system “like in Superman 3.” I just learned something new, the colloquial term for that trick is “salami slicing.” Hrmph. Okay.

Name a Time When… Doug Hates His Job

Anyway, if you know that film, you are way beyond ready. But let’s face it, most people who have lived real life know that almost every job sucks, unless it’s cool. I’ve worked in office/call centers 3 times in my life.

They weren’t that bad, but my Aquarian zodiac did not want me to deal with that horror for much longer. I’m not making the best case for my resume, but I don’t care anymore, they were good opportunities at the time, but I thank the Lord I am done with them.

I guess I forgot to mention the TV show The Office. Not sure how I made that oversight, but it’s in there too!

It starts off in an office in a conversation with a nut-job co-worker who asks the main character. When I played, he asked me if I like Marvel or DC better. I thought I had picked Marvel, but I chose DC and he went absolutely bonkers. The dialogue is so over the top and imposing, so I was already amused. I really do prefer Marvel, but his reaction is the sort of horse manure you have to deal with when talking to certain people in real life. People aren’t smart you guys, but some of them are.

The game progresses into a def archetype of Bill Lumbergh, Peter’s boss, from Office Space. But before you know it, at least if you quit right away, which I did because it felt good, the mock Lumbergh sends some cronies after you to fight in the street.

It’s all fantasy Scott Pilgrim kind of stuff, and the plot is not rock solid, but it’s more plot than quite a few games, and I actually felt a bit sorry for Doug, plus the dialogue is pretty funny. Man, these devs, have so much awesome game dialogue, these are good times.

Darn, It Feels Good to Be a Gangster in Doug Hates His Job

I’m sure there is something redeeming somewhere for Doug, but I plowed through as long as I could and made the correct choice to quit my job when reflecting on his woes. Obviously, that’s not a real option, so it’s off to work again. I couldn’t quite nail down the commute part of the game, but I was just lazy and wanted to get my thoughts down.

My last post and this post were both built around jobs I’ve had. Life has some weird side quests. But there’s one thing for certain. They all involve explosive diarrhea, literally or figuratively.

What Would You Say Your Strengths Are?

The environments and styles of low poly character/environment design are quite unique. I enjoyed the sound design too. One could probably track down the ambient sounds of a busy office, and it’s a strange thing to notice, but why not? I think the creators might know a thing or two about working in offices.

That’s all I’m going to say. For what it is, I really thought it was fun and poignant. The game releases on March 5th, 2021. I’ve provided a link below. Here’s a little more info from the developer, which I didn’t fully explore. Looks like there is a lot more to this game though.:

The Game is on Nintendo eShop. Just search for “Doug Hates His Job.”