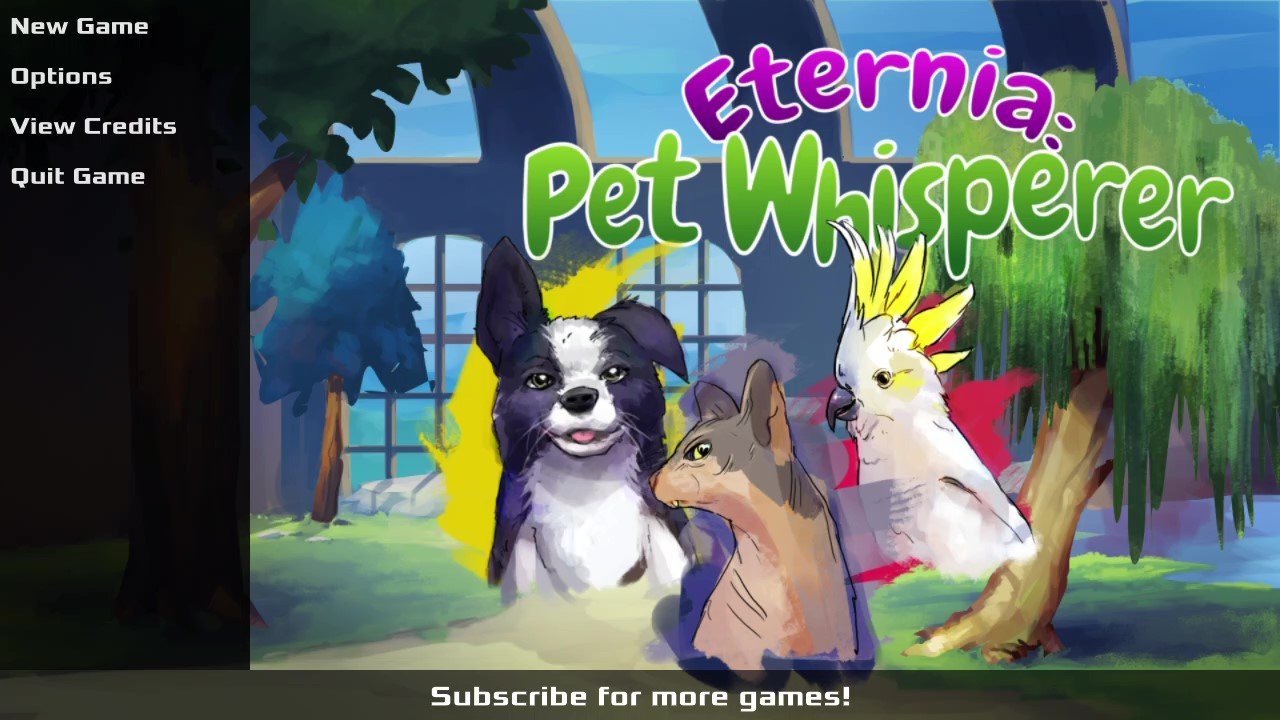 There’s a short, charming story in Eternia: Pet Whisperer. Even if you’re a cockatoo/border-collie lover like me, or whether you lean more toward the exotic koala/frill-necked lizard, or rat brothers. These animals have a slight backstory, and cute appearance, plus a natural subtle wit. It’s got that solo dev quirk that I love best of all, where the plot derails to form a full loopable plot-line but keep things manageable; that’s a plus, folks. And I’m not going to spoil it for you, because you deserve that, but also because I think it’s one of the charms of the game.

Yo, Eternia: Pet Whisperer is a Visual Novel

Describing gameplay always escapes convention in visual novels. But there’s a lot to say about the plot. So, let’s lay it out there. You, the self-named character, are in the market for a new pet. It’s not easy living alone in that apartment with no one to talk to, nails to bite, boring TV shows. So, you’re off to the “Rainbow Dome,” populated by animals ranging from domestic to exotic. Learn quickly that, this is no normal pet shelter.

Connie the cock-a-too is your initiator. She lets a few quips slip her beak, but most of the intro revolves around whether you’re a veritable Dr. Dolittle. Your character spends a little time questioning his groundedness while having some full-fledged conversations with a range of animal, don’t assume too much though, because things aren’t as they seem.

It’s pretty funny, and I enjoyed getting to know the animals. Their demeanor is on par with a stranger on the bus, but the dialogue is pretty well written. And even though my instincts would usually direct me otherwise–along with the fact that I adopted the border-collie at the end–Maria the frill-neck lizard was actually my favorite. Why wouldn’t it be?

In summary of the gameplay, you just talk to the various animals, and whoever you end up talking to the most becomes the first one up for adoption. When you head back to your apartment, all is revealed. It’s a very weird but amusing and totally acceptable ending. And in it, you’re given the option of starting over from the beginning with the intention of adopting a different pet if you wish.

Although this is a section for thoughts, there’s no need to think too hard about this cute/fun adventure in pet adoption. I felt like playing a game that wasn’t going to stress me out too much, and this one worked. Please note, that this is a game from ItchIO’s most recent charity bundle. It’s also available on Steam, but you might want to explore the aforementioned source so you can get it with a cacophony of hootin’ and hollerin’ games of all sorts for a good cause.

Hey, I prioritized this one over Skatebird today (which I’ll get around to), so my priorities are clear. Oh yeah, and just one more re-iteration: things aren’t what they seem in Eternia: Pet Whisperer.

Well, that’s it. This is the kind of stuff I love to write about. Hopefully, you’re on board with it too. Thanks for checking out my blog, Mr. Dave Pizza. I hope you enjoyed your visit. Please have a look around and read as much as you like. Or leave a comment below. I’ve covered hundreds of games and will continue. Best wishes. Be good now.