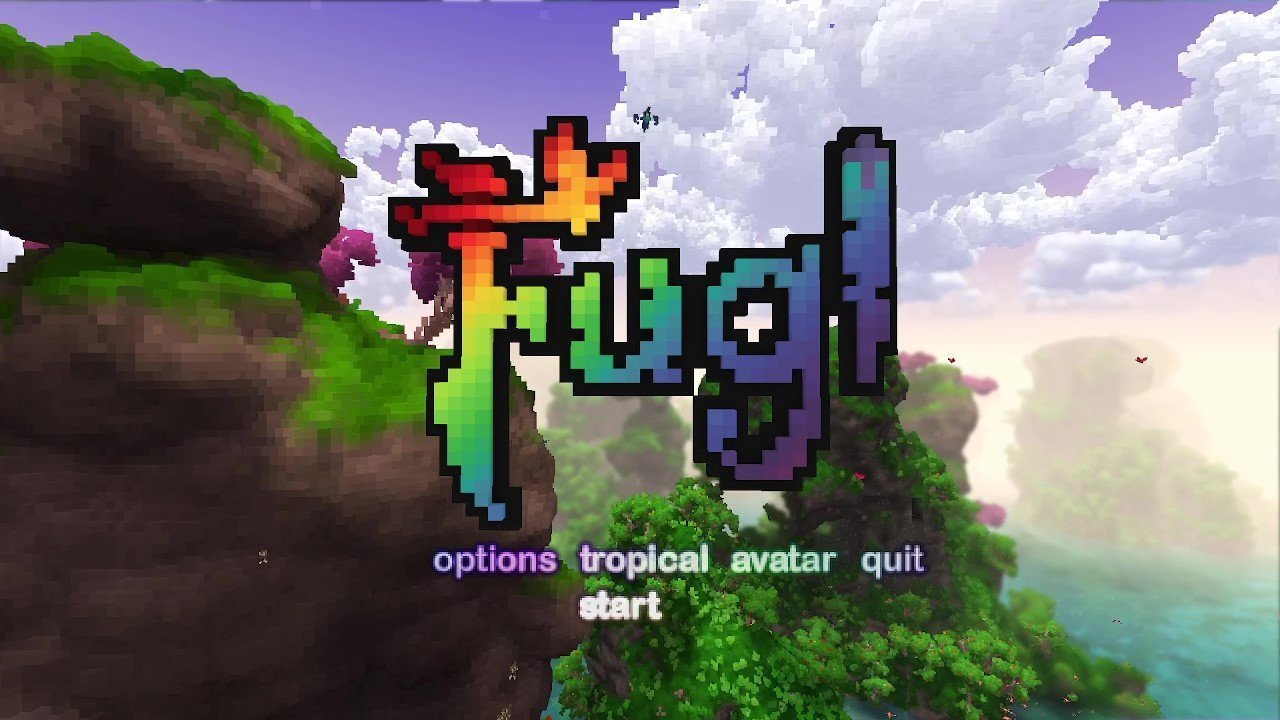 The word Fugl means bird in Norwegian. Fugl is a casual sandbox indie game created by a small group of dedicated developers. Its story is whatever you make it, and the gameplay is most certainly endorsed by all birds.

I started as a colorful neutral voxel bird in a voxel world and glide through the treetops and oceans, plus more. Interact with your environment to test new experiences. Transform into other birds, try neat stunts, and listen to the pleasant music that guides you through the map. To the skies!

You might notice from the pictures here that I really only drifted through one particular area, an ocean island jungle, but I can see from the game page that there are actually a variety of environments and animals. It was plenty interesting for me though.

As you’ll see, the game environment is entirely constructed from voxels, that unique bridge between pixel art and Minecraft.

It looks really nice here and adds more to the feel than anything. This is not my first voxel game, but I do like that aesthetic now that I’ve seen what can be done with it. Whether this is easier for the game designers or not? I honestly don’t know. What’s important is the feel of the game, which is really fluid and peaceful.

There’s not a ton of complexity in terms of objectives in Fugl, but I found it interesting alone to figure out the controls. This worked fine with my DS4 controller. Woah! (Using Windows driver.) It is also available on Mobile and VR. I am considering investing in a VR set after seeing some of the games out there on it. I’d start off with what you have, but this would be pretty neat on that platform.

Birds, birbs, whatever you want to call them. I have long been a fan of birds and all animals. When I was playing, I opened my window to play Fugl with my soundbar, and the cacophony of game birds and IRL front yard birds were truly impressive. They did sound like they were amused with the sounds coming from the game, but that’s up for debate.

One of the cool mechanics I found in the starting zone was the way you transform into another bird. You basically just get as close as you can to them and your appearance just kind of blends into a new type of bird with colors and sounds. I guess if you play for a while you can transform into animal too. That sounds kind of cool, not totally sure what it takes to get there though.

A Couple of Other Thoughts on Fugl

There aren’t exactly no obstacles. There is a very eery one that I discovered right away. It seems that if you are too sedentary and non-progressive, parts of the environment unravel into dark wispy smoke. The music becomes a little off as well, game creepy music basically. It’s easy to avoid though, just go the other way! This is pretty much enough to keep you exploring the game. Also, it hecka reminds me of the TV show LOST and the smoke monster. I seriously need to watch that show again.

I find Fugl to be interesting in a way I haven’t seen before. Flying games are becoming quite popular and they’re jigsawed into a variety of categories and genres. It seems to be a common indie jam or solo dev project because those mechanics are pretty universal. I have not seen the voxel version before I played this one though.

I could play this quite a bit. It has a very calm, fun feel. Birds generally put me in a good mood, especially when they’re the protagonist!

Thank you for reading MrDavePizza.com. This is semi-tentative but you can start to expect new reviews on Monday, Tuesday, Thursday, and Friday. Could be any topic but mostly indie games. Have a great day!