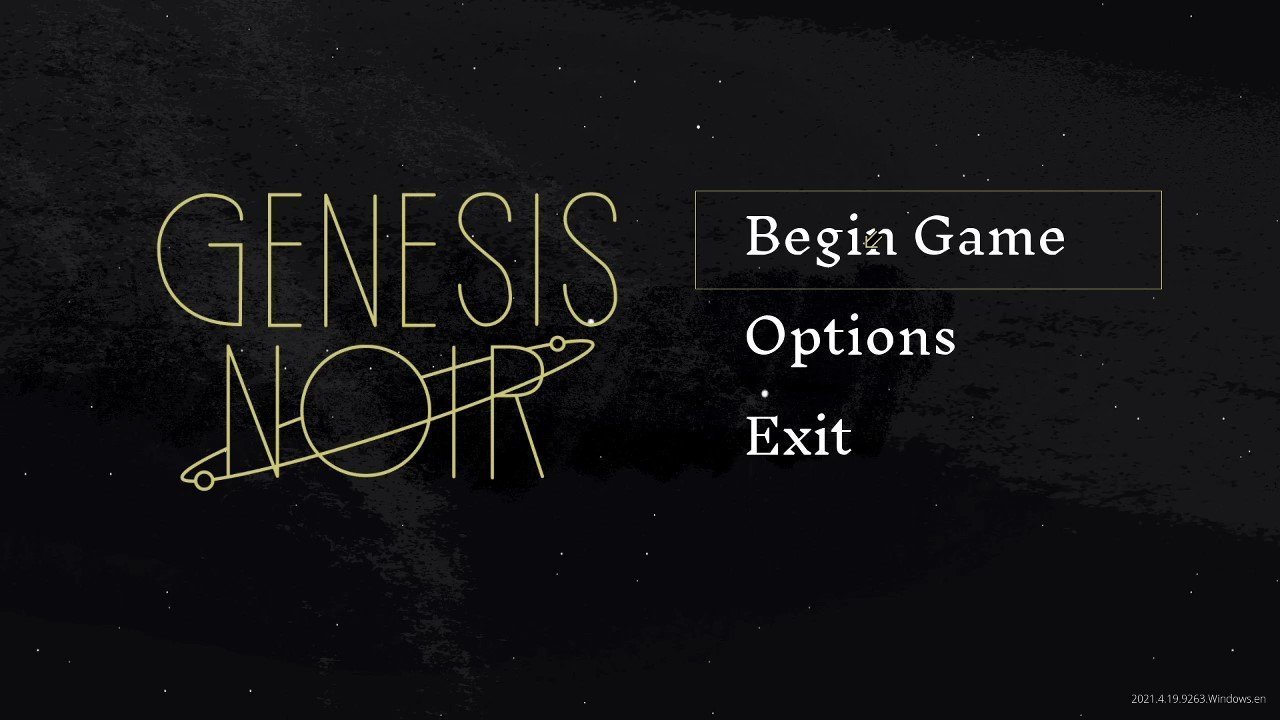 Genesis Noir is an experimental detective story that takes place in a cosmogonic setting in different parts of the universe. If that already sounds mind-blowing, it’s artistically extravagant in the creative gears that turn its two-dimensional, or even 5-dimensional, gameplay mechanics–metaphorically at least.

The game starts wandering the streets of some strange alternative 1950s cityscape and blows open a new case to investigate with a bang, a big bang. Yes, that one. In this review, I’ll talk about the game–and also talk to you about a new project I’m working on involving space exploration in games.

First, no bones about it, Genesis Noir is challenging. Not so much in the way that games like Cuphead, which are also anachronistic, are challenging/impossible. More like the fact that the puzzles require some thought if you’re not going to look up a walkthrough. I thought I was gold when I solved the first one, but then stuff got so weird, interesting, and somewhat baffling. Also, I shouldn’t say that about Cuphead; I’ve only sheepishly watched demonstrate how challenging it is. Luckily, I have the internet, so I skipped around after playing to see what I missed. Welcome to reality.

One thing I noticed, almost from when I saw the trailer or hoped at least, is that the setting of this game is SO in tune with the film Interstellar starring Matthew McConaughey. I also keep getting notifications from YouTube every time the next interstellar song meme video is. Some are just wrong, but a few are genuinely hilarious. Such is the ‘webs.

From the moment you enter into the cutscene that throws you into quantum hallways of double selves and grids of varying obscurity, yeah, this is so Interstellar. I recently realized that film came out around 5 years ago, what the…? It’s a good opportunity to think about that film though because it was quite fascinating and unique, and I don’t mind thinking about its philosophical and maybe even scientific implications.

I read an article from Neil DeGrasse Tyson a few years ago about how that film could actually represent a scientifically realistic scenario. My reaction to that: WOAH. Genesis Noir captures that alright. And plays it cool.

The game made me wonder what its narrative was. It’s a 3-hour playtime at the earliest, but within the thematics of the story, I think this is mostly a story about people. About our innocence and also intuition to deeper mysteries. There were things in this game that were also quite deep in thought. The music and audio for the game are so interesting to me. It’s like a mix between spooky jazz and the clicks and clacks of clocks and corners.

I suppose the question of this game setting, is, what exactly does it look like to see things 5 dimensionally. Quick answer: like this.

Get Your Butt To Mars!

This game has nothing to do with Mars, but I wanted to say that.

I like to use these reviews to talk about personal topics of interest because not everything is about games, but they can be. It’s been real existential on planet Earth lately. And as I continue working on this website, I’ve questioned how is this thing I do important, is it even at all? It is to me but beyond that? I listened to a nice speech about living for a cause recently. If you have a cause, you can do a lot more for it just because you are passionate about that thing. Obvious, and true. But games? I don’t know, I’ve grown a lot over this past year. So, what do I care about? Obviously, there’s a balance between science, entertainment, and my writing. I’ve often, out of all agendas, thought that space exploration for the continuity of our species is probably the most important thing ever.

I’m afraid of heights. I suck at math. Still, to see humanity voyage into the stars is our destiny in my opinion, whether it’s on a rocket or through a door. If the speech I listened to is right, maybe I need to see this through. I don’t even really need to be somebody who does it, I just want to support it. It’s a little crazy, but if it wasn’t important, I’d probably cathartically dismiss it. This isn’t really the topic of this game, although cosmology is certainly the theme.

NASA has been encouraging different fields of independent groups and individuals to help discuss what the course of space exploration over the next 30 years looks like in a project called Future-Scaping Our Skies from a sponsored program called HeroX. I even read a great article in Forbes, not too dated, about how nuclear fission and fusion could send us into the galaxy before the end of the century! WHAT. In 5 years we’ll have completed the construction of the Extra Large Telescope project in Chile. We’re on our way to Mars. We just flew a drone for the first time on another planet 7 hours ago WHAT. WHAT. WHAT.

So, that’s my review. I guess it was more about space, but this game is a nice tribute to cosmologists and poets.

One other actual thing to discuss in Genesis: Noir. I don’t have a severely deprecated graphics card. It’s not that great, but I did have to turn down the graphics a bit on this though, which is slightly bewildering. Luckily, it improved the graphics quite a bit. Check the system requirements if you want to max out this game, even though I’m not sure where the powerhouse was needed for it. It does look good either way.

Thanks so much for reading MrDavePizza.com. I review games all the time, and you can read as much as you like, for free. I’m taking breaks on updates for weekends, or at least I did this past one. I’m still here though, and some rules are meant to be broken. Thanks again.