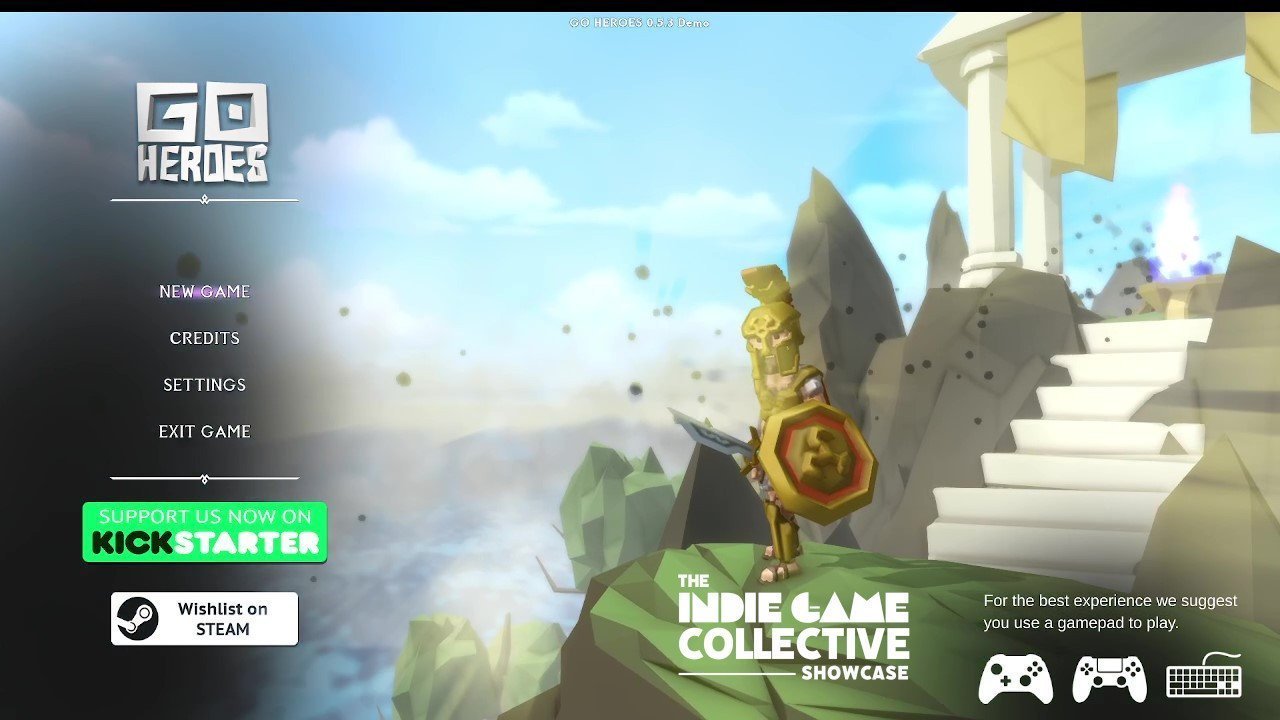 Go Heroes is a coming soon, turn-based RPG based on the stories of Greek Mythology. Each level is filled with puzzles that not only advance your progress in the game but progress the story. It is not quite isometric but rather described as four-directional–it is sort of like using a board game with camera controls. You play as Prometheus, the Greek titan, who dared give the gift of fire to mankind. I am fortunate enough to have a very early press copy of this game in collaboration with Indie Game Collective and Happyland Games. So, let’s take a look.

Before I begin, if you are mostly just interested in trying this, there is a demo at the steam link below. Seeing as this is a work-in-progress though, perhaps I better shine some light on this first! After starting the game, the tutorial works just fine for me, even with controller support and everything. The story of Prometheus is echoed into the realm that seems to be between the worlds of the story and the Earth. Although generally, this is a fantasy world steeped in lore. You learn basic controls and figure out what the general objective of the game is, which is ultimately to steal the fire, solve puzzles, and fight.

Graphics will run smoother on some systems currently. Otherwise, it’s a pleasant low-poly graphics system with a smooth natural palette of colors. My preview limits me from exploring some of the more elaborate areas of this game yet, but it is very combat reliant. This is not a nail-biting dungeon wipe type of game though. From what I’ve gleaned elsewhere, the combat in my gameplay is based on puzzle-solving and storyline.

Most of the puzzles seem to exist in the form of figuring out how to shift things around. This is to get from one section of your area to another. I noticed there are some variations in how this plays out earlier in the game. This is based on my copy versus some gameplay videos I watched. I have included some photos from the press kit along with my own to give a general context. At one point, I used a bow and arrow to trigger a lever. That lever moved an island toward me to cross the water. It feels very Myst-like, as all puzzle games do. This is a good thing.

I have always been fascinated with the god Prometheus since I heard about the myth. Also since “Prometheus & Bob” clips on old-school Nickelodeon, I love the name Prometheus, and his story is pretty cool, he is a champion for humanity. The game sort of wraps up the details in its story to allow for flexibility. This is fine really since that is pretty much the purpose of myths in my opinion.

I am actually quite intrigued to see how Prometheus’s story unfolds within Go Heroes because he is not one of the more common deities that are talked about. As I said earlier his legacy is giving fire from the gods to mortal humans. Whether it is metaphorical for a sort of life force, is really open to interpretation.

Beyond that, from what I’ve gathered, mythology isn’t oppressively strong in Go Heroes, but it is there and it is a lot of fun. This is a puzzle game most of all, but the mythology kind of makes it all a lot more interesting. There are things about it that everybody can enjoy here. There are certainly plenty of mythological beings to contend with as you progress through Go Heroes. Critters and levers too.

I really would like to take more of a look at this down the line, I might indeed do that too. Based on my nominal gameplay and copious notes, images, and videos, this will be really cool when everything is put together. I love the graphics and the narration, and it is worth wishlisting and being ready for any sort of future updates.

Go Heroes has a very optimistic dev strategy. This is why I think it should be acknowledged. There are lots of mechanics that are getting fleshed out here, but once they’re all working in harmony with the developer’s vision, it’s going to be a solid game. It is a very calm game, and I could see progress throughout the whole game was very enjoyable.

Anyway, that’s it for today. I want to thank you so much for reading MrDavePizza.com. It is a joy to write about these games, so the content is finally starting to build up here! I can even suggest browsing at will. There is plenty to see, so please have a look around. And please come back!