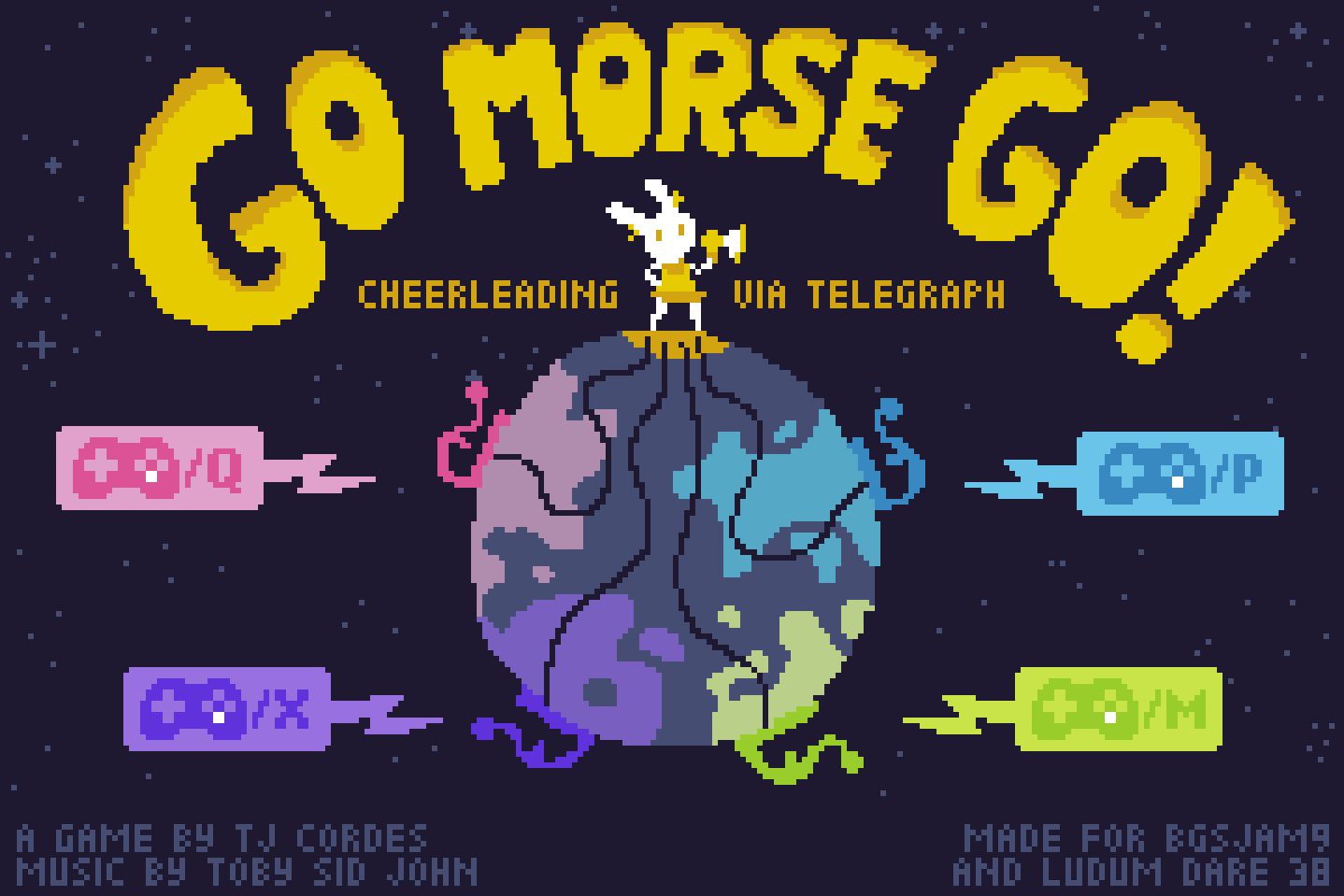 Just a forewarning, I’m going to use Go Morse Go! as an introduction to a very personal interest in radio and telegraph topics. But aside from that, may I first inform you that this game is quite neat. It’s like Powerpuff Girls with rabbits that know how to rock the CW. There was some news of Powerpuff Girls trending recently, so I guess I found this fact amusing.

This is a real casual game that is challenging but does not require immense skill to play. Then again, I only played single-player with some computer rabbits. It can be played with up to four players on separate controllers. What do you think this is, a ham convention?

BRIGHT pixelated bunnies! It’s a finished full-release indie game on Itch.IO and Steam. In Go Morse Go, you are trained for a competition to outdo your opponents, up to 4 players, by spelling numbers in Morse Code. You are presented with a letter, and you click the button on your controller to spell the corresponding code in Morse to spell that letter. I’ll explain.

If you’re unfamiliar with Morse, it’s named after an American inventor named Samuel Morse during the 1830s during the times of telegraph wires. He was pretty innovative, but I’m sure if he could have seen how I played it in Go, Morse, Go, his head would explode. I mean because of the technological advancements, not how bad I am. Okay, I’m not that great, although I totally blew away those CPU rabbit competitors.

So, this game kind of intrigued me. As I occasionally mention, I’ve had a pretty steady amateur radio hobby for a few very long periods in my life. Zing. But really, I have. I bought a scanner when I was 16 with, I think, birthday money at a ham convention in my city. Back in the day, you could listen to anything. I had some good times listening to that thing.

The Highs of High-Frequency

These days, I’m mostly only interested in aviation monitoring as a hobby. This is totally normal and common, especially in England. There was a period when I listened to railroad chatter, but all it ever sounds like, as someone put it, like angry men yelling numbers at each other.

I do occasionally tune into shortwave content once in a while, and this is where I can finally tie all this together. Many people broadcasting on shortwaves are amateurs. Not like unskilled, that is literally what radio hobbyists generally call themselves. Most probably. Every night they fill the airwaves with pulsating dit do, do dit do. This is Morse code. And you can say anything with it because its natural integrity on the airwaves makes it travel quite far sometimes. How far? Well, on a good night I can listen to Radio New Zealand 10,000 miles away. And that’s what Go, Morse, Go has the obvious association with, for me.

I’ve wanted to learn Morse code for ages. There’s always been a fantasy about turning on the shortwave to hear people talk about anything with the non-muffled first impressions of someone’s accent or pace. Stuff does get lost in translation, you guys, and I still haven’t mastered that one.

Sorry, That Got Way “On” Topic

Go, Morse, Go is a rather short game. No problem there, it is quite fun, and if I knew somebody who might want to play it, I definitely would.

The only thing I couldn’t figure out is if there was some way I could play the game without having to see the code or the letter, like flash cards. It seems that this is more about the fun of paddling out the code for the challenge of it.

There actually is a lot of software that teaches Morse out there, but I just wanted to share that layer with it for your own sake.

Go, Morse, Go: Arcade Edition is $1.99 on Itch.IO and steam. However you decide to purchase it, you will have a Steam key included. It’s insanely easy, but possibly challenging like I said, which is a promising descriptor for a casual game and a casual experience.

I hope you enjoyed this game review/radio enthusiasm as much as I did. I had a doozie of a Wednesday, so I’m glad I was able to make it through this one, there indeed shall be plenty more.

Here is a link to Go, Morse, Go on Steam Store: https://store.steampowered.com/app/797570/Go_Morse_Go_Arcade_Edition/