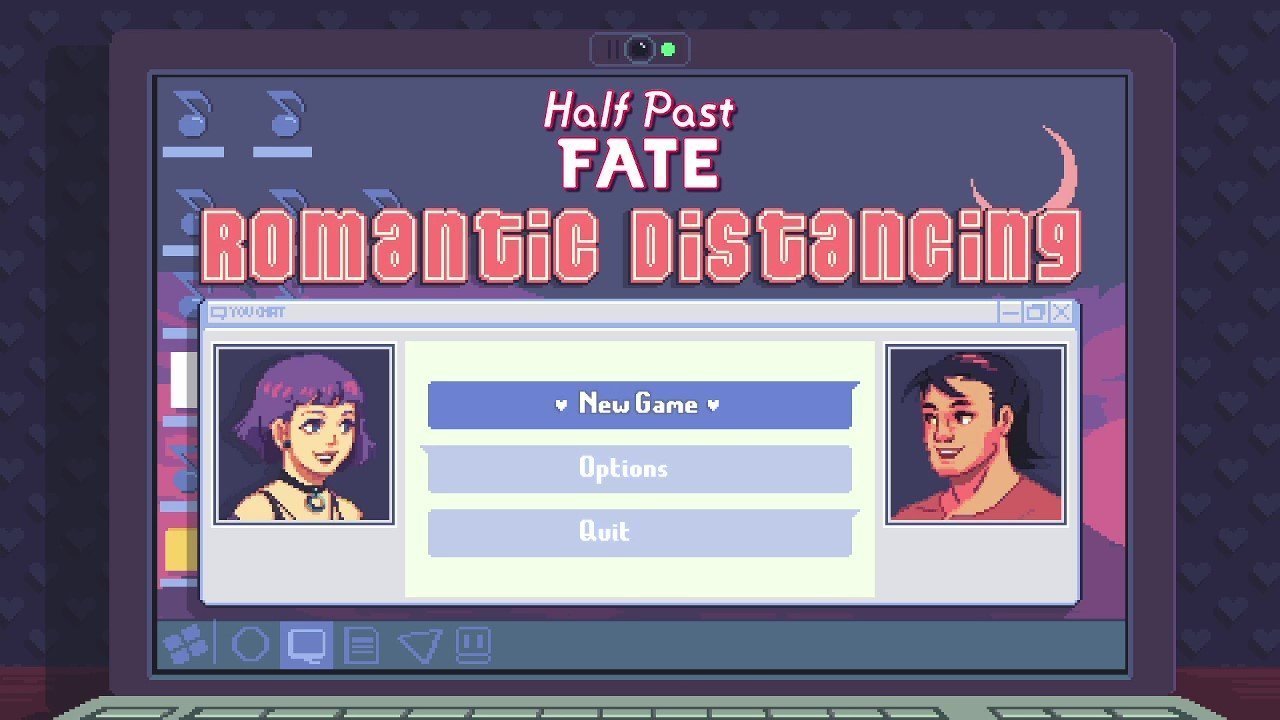 Half Past Fate: Romantic Distance is a visual novel about dating during the pandemic. It is out as of February 2021. The story revolves around a mutual interest involving a young man and his broken laptop named Stephen and a clerk at a computer repair shop named Robin.

Soon after they meet, the city goes into lockdown because of the pandemic. They try to make it work using video dating for multiple months and test the limits of distant relationships. The game has a very pleasing 2.5D pixel art aesthetic and a catchy chiptune soundtrack.

What is Half Past Fate?

You might think to yourself either “hey, this is clever,” or maybe “too soon.” Most people have been literally dealing with this scenario for over a year now. As vaccines roll out in many places, only now can some of us look at this type of game and think okay, this isn’t too triggering. From any perspective, however, this is a darn fine game and there is plenty of joy in playing it.

Many of the higher design aesthetics of this game are in the attention to detail. When Stephen starts off in the city block taking his laptop to the computer store. All the shops and city fixtures are interactive. Most interactions are possible by either looking at it, using it, or speaking to someone. There is plenty of interactivity in the game overall for a visual novel. It easily slides into the interactive fiction category as well, which is an additional genre favorite of mine.

There is no lackadaisical nature to this relationship. Yes, it is casual but pretty authentic. I’ve been in multiple distance relationships. I recognize all the fun small details as well as the overarching themes of frustration and difficulty. The developer of this game knew going into it that they needed to explore all elements of the story great and small.

The game runs around 45 minutes to play through. I bought it at retail price. It’s pretty reasonable for the quality of gameplay this game has. I was surprised when Half Past Fate ended, but it is also a nice thing because I was able to compact the experience into a single session.

It wasn’t that abruptly either. It’s just that I don’t think anybody would be able to capture the entire catalog of conversations that take place in a distance relationship.

When you’re bored, you can find anything to talk to. You can also do it when you’re interested. This is a game of hope. Certainly, there could be more or less. But artists including game developers regularly take from the world around us to present a point of view. This game might be very helpful if you relate most to game characters but also are beyond stressed with what has happened. Life will go on.

Also, it was still released only in February. I mostly play demos and free to plays, but I plunked down $5 for this game. I’m glad I did, I felt more in connection with this past year playing this game than anything I’d get reading the news.

So, keep going, love those around you, and hold on. Stephen and Robin will.

Thanks for reading MrDavePizza.com. Please have a look around and read anything else that catches your interest as much as you like. I have a whole section of visual novels and plenty of indie games.