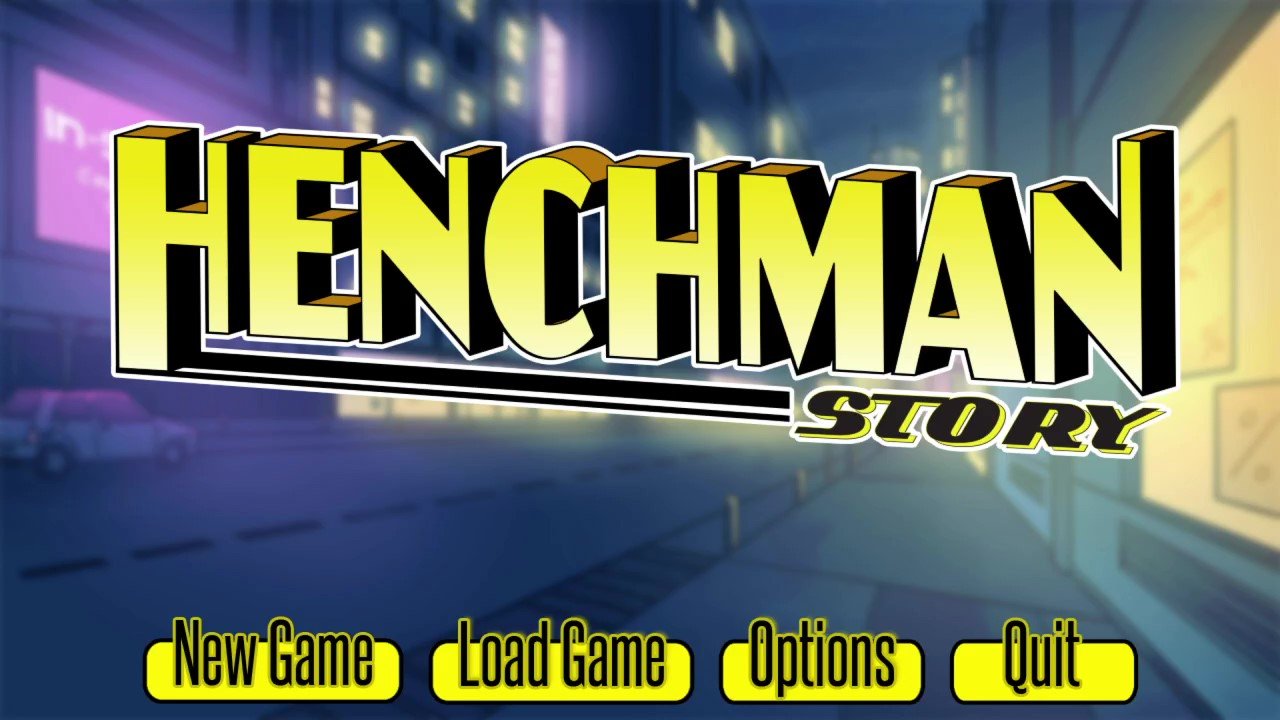 I’ve been trying to give visual novels a place in my catalog. It’s a fun game style that is conducive to some good storytelling. Incidentally, I keep finding more and more edgy but good-natured humor in them. Pick a theme and go, that’s where I’d like to see these go. Most of these games are also tagged as dating sims. But that is pretty much secondary to my interest in them, however, it may interest you! Today I’ll be looking at the visual novel Henchman.

Most of the visual novels out there are also anime, not sure why. But the more recent cartoony/comic style of games that are appearing are much more intriguing to me, and that is how I stumbled upon…

Henchman Story is a cartoony comedy visual novel about life as a henchman for a supervillain named Lord Bedlam. You’ll live life within the ranks of other henchmen in dorm-style accommodations within the secret hideout or out in the field, holding your ground against superheroes who want to foil Lord Bedlam’s operations.

This is not an amateur attempt. It is certainly indie, but the design is a 2D comic-style class act, narrated by a cast of character actors, and a pretty fleshed-out storyline.

The main character Stan is a slightly more than low-grade henchman that you’ll interact with in the world as. Most of the interaction is with a character named Dave. He is a royal pain in the behind though.

There used to be, might still be, this series of radio ads here that went something like, “Need a reliable worker? Somebody who doesn’t slack around and do nothing like Dave? Don’t hire a Dave, use our employment website.”

I’m not joking. I was really, very mad when I heard one of these. Whatever though, I am not that ambassador of all Dave’s. And if I was, I’d say who cares? I’ve met many Dave’s in my life and they tend to be very cool people.

Anyway, now that I have played more, I think it is hilarious. He is basically this way too enthusiastic cornball who manages the henchman operations for Lord Bedlam in the way somebody might manage a corporate franchise. Nothing wrong with that actually.

The demo lasts around 30 minutes. Within that time I completed two operations, got whooped by three heroes, and even met another, much better, super villain. And it kind of wrapped up there with a bit of improv-style humor at the end about the demo.

A few weeks ago, I wrote about a game I used to play called City of Heroes. I hadn’t mentioned much about the fact there was a villain expansion, but it seems that people often like villain stories as much as hero stories. That’s actually one reason I decided to check this game out.

For just a tad more commentary, there is something glaringly obvious that I just realized when thinking about this game. If this game were a TV show, Stan would be Jim, and Lord Bedlam is basically Michael Scott. If you haven’t seen that show, Michael Scott somehow keeps things going but usually while repeatedly engaging in self-deprecation through his hijinks. I think that’s a super fun comparison for this game.

So in summary, this game is going to be great, you’re going to do great, by golly I’m coming with you Silken Sail Entertainment. Best of luck.

Thanks for reading this honest, although brief, review of Henchman Story on MrDavePizza.com. Make sure to check out the game and wishlist it or buy it on Steam! Support your indie devs.