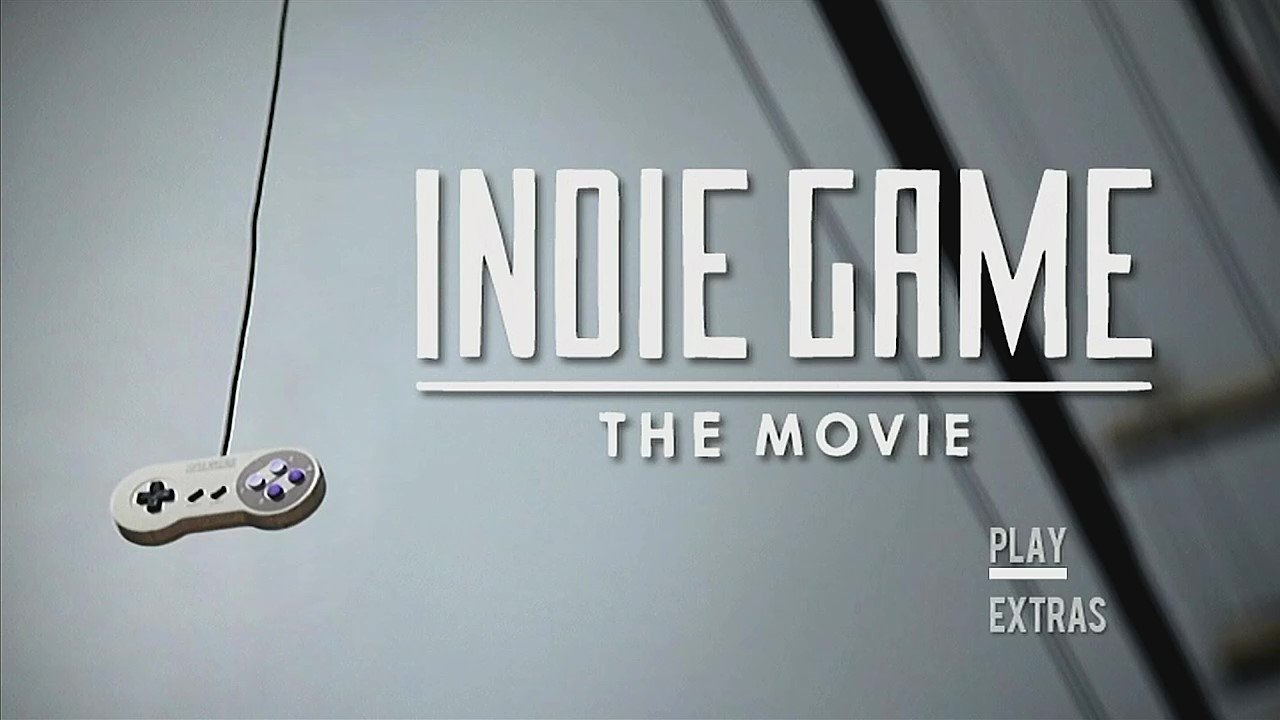 Indie Game: The Movie is, suitably, a 2011 indie documentary made by Canadian Filmmakers about indie video games. It cracks open the shell of contemporary indie game development by following a handful of developers as they make their first games and bring them to market.

It evokes the struggle of the indie game business model and follows artists and programmers through the lows and highs of this personal journey. This film had moments of absolute enchantment but also discomfort. I want to give this a chance though because I took something very real and personal from this documentary.

I am resistant to saying it’s an instantly inspirational film. It’s grim. But it’s a documentary, and documentaries exist to capture truth. And in truth, is beauty. I really hoped for something that could inspire me to keep doing what I’m doing here with games and writing and possibly even my own game development project. And it actually does do that. I don’t want to spoil anything, but this film may very well make you cry by the end.

Here’s just a little background. The game follows developers from three games: Braid, Super Meat Boy, and Fez. I didn’t do a lot of research on the games afterward, but just from my own blogging, I know that these developers seem to be doing okay these days. A major element of this game deals with the digital distribution systems of indie games. I hadn’t really thought of it before, but that has literally been the catalyst for everything developers, gamers, and I do within this realm of Indie Games. It’s a 2011 film also, so it’s important to keep in mind that the market hadn’t quite exploded into what it is now yet.

Indie Game: The Movie: The Feels

Probably one of the most important themes of this film, beyond the obvious get rich making games theme, is that art on a deadline is always a hazard to mental health. Actually so is anything of any substantial size.

And Tommy, Super Meat Boy dev, says in a section, “Someone once told me that the hardest part of success is getting anyone to acknowledge it.” That’s some Gandalf wisdom, really, because I’ve seen that. It’s just the way things are. I would love to make a game myself, and I hope to, although it’d be a personal journey because I don’t think I could ever convince anybody what it means to me.

Anyway, to take on a more formal response, the story arc of the game is really about three dev groups. One is John Blow, creator of Braid, who created one of the most successful indie games ever made, some might even say the first successful indie game. It depends on how you look at it, but in Indie Game: The Movie, it is obvious that t pretty much is. Much of the story is about the alienation John first felt when publishing his game.

This game highlights something super pertinent in our current society from the 2010s to the 2020s. Back then, products were objects unattached to anything valuable. Now, almost everything is the opposite. Forget the golden calf, this t-shirt literally defines me. I’m not an absolute anti-materialist, but indie games are basically a transcendence of material culture. What a realization!

The dev teams of the other two games are facing opposite problems though. Tommy and Edmund on one hand, are deep into the final crunch before release and they are pouring their souls into Super Meat Boy. And Phil Fish of Fez can’t seem to ever finish, he just keeps going and going. Phil’s story has some dark twists and turns, but his passion is inspirational to some devs. Not to give preference, but Super Meat Boy was the closest genre of what I dig. Messy and weird. It’s not a lifestyle choice though… unless it is.

Indie Game: The Movie: Thumbs Up

I know this game is a decade old, and it might seem outdated, but it’s really not. Probably the only thing that’s different is how indie games are more powerful than they have ever been. And this documentary almost seems like it is because of it subjects. Could be.

Thanks for reading MrDavePizza.com. Have a look around and read as much as you like!

Turtle Power: The Definitive History of the TMNT is the Ultimate Documentary You Need to See REVIEWJune 20, 2021
Best of Ancient Aliens on DVD is What I Watched Today REVIEWMay 17, 2021
Subscribe
Login
0 Comments
Inline Feedbacks
View all comments