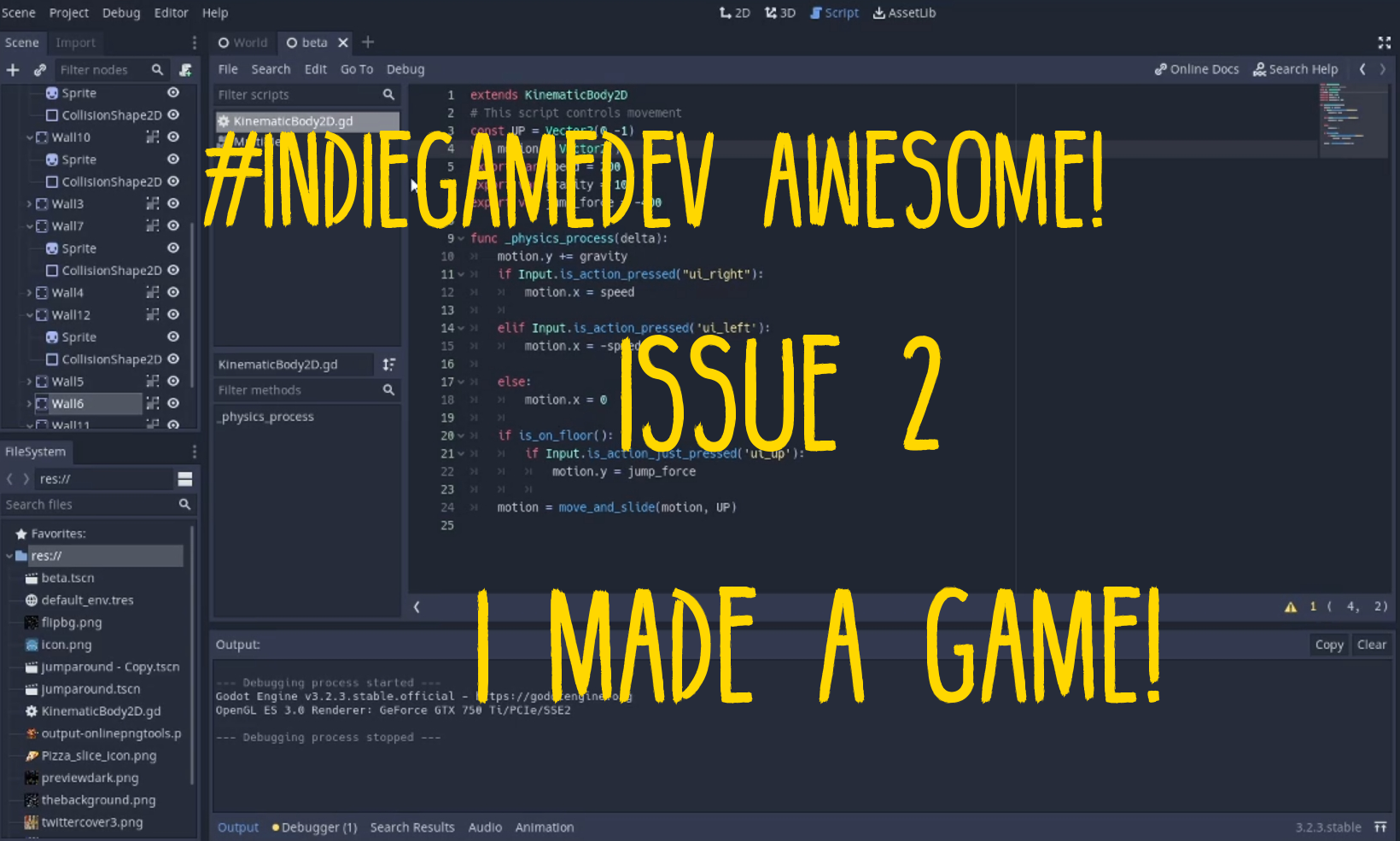 I made a game! In Issue #1 of #indiegamedev AWESOME, I said that my game-making skills were uncertain, to say the least. Well, I want to revise that, I have it in me and so do you! There was a very prominent alert in my brain that said “Mr. Dave Pizza, you have to make a game.” I felt like Kevin Costner in Field of Dreams. Now, let’s not ever talk about that movie again.

I Made a Game: Beginning to Begin Beginning

The past few weeks in my intense caretaking of the site have made me realize that maybe all that time I spent getting a formal education wasn’t a complete waste of time. There’s a basic structure to everything that adheres to a system, even if you don’t know how. The scientific method, or more specifically trial and error and discovery–at least with game making.

Inevitably though, you will have to do some research. I’m kind of a freak in that I can get really fascinated with research. Some topics are more fascinating than others. One cool thing about making games is you are creating something that literally exists to have fun. That’s not so bad a tradeoff.

I started my quest last week, in Issue 1, in researching the very basics. I knew people made games from software called Unity, a game engine. Then I then found out that Unreal and GoDot are other game engines that can also do stuff. GoDot, the most nuanced of the three and its 2D platform advantage (it also works with 3D game dev) sounded best to me. So I tried it.

I really can’t say enough about GoDot. It is fast, stable, and actually kind of easy. I really had no idea what I was going to do with it, but I decided I’d start with a small 2D game and maybe flip around the graphics or something.

So, while GoDot is “easy,” it cannot read minds! And I can’t read its mind either! I did the research and realized I needed a step-by-step tutorial. I was drawn to a couple of YouTube tutorials. When it comes to stuff like advanced math or logical operations I need my hand held or I get so confused. The videos were nice because I could see and hear what I need to understand for this process. Each of them contained video screen captures of the GoDot game development software, as the things talked about were demonstrated. “This is the way!”

I made a Game: Make a Game in Under An Hour

I came across a great tutorial, amongst others, on YouTube from an instructor on the Tulsa Game Developers channel. This tutorial is based on a series of tutorials by a video tutor named Heartbeast another GoDot video instructor. The idea of making a game in under an hour, but you’re not making a blockbuster straight out of the shop, you’ve got to take steps.

Tutorials give a feel for the initial components of a game within GoDot. And I feel like they did for me. When I first reached the ability to make my little blue icon jump on another vector, I was celebrating in my heart. (P.S. I haven’t disowned the other engines, this is just part of my own process. When I read that it was easy for beginners, it me the qualifications.)

#indiegamedev You Have What it Takes

The steps are these. Create a node, make a sprite under it, assign a physics template to that sprite, and assign properties to the object you just made with some built-in procedures. One thing I liked about GoDot was all of this was searchable and a lot of it was rather efficient saving tons of time. I really did get through it quite fast watching the under-an-hour video. I really think an hour is a comfortable time frame to learn a concept with this stuff.

If you know how to program, especially in C# or Python (or so I’ve been told,) this might seem easy. If you start with nothing, you’re still probably going to be okay. Everything is documented online, and who knows, maybe building up your skills as you make your game will have its advantages! Unclouded as such. If you have any doubts just try a beginner’s tutorial. There are many. If you’ve made it this far you’ve got the stuff.

Yes, that is the Mr. Dave Pizza logo from my site bouncing around on pizzas. It’s pretty rough, hah, but it’s technically a game! There are no objectives or enemies, just chilling out on some pizza. I just needed to see if it could be done. This program is intuitive. I added some images as resources and replaced the other textures on top of the tutorial project. You can even drag and scale objects with the click of a button. I really recommend trying that too, because you will soon realize how customizable this software is. Doing this allowed me to create something that worked but that I also understand.

One other cool thing in the tutorial, if you can find it, is the demo, from a three-day project based on the code you used for this tutorial. He downloaded an asset pack–which I mentioned in Issue 1–and created a demo that is quite amazing.

Which, is what I’ll be trying in the next issue of this series, #indiegamedev AWESOME issue 3, asset packs, and probably some different stuff? One last thing, there are several tutorials at a site called “GoDot Docs.” Maybe you want to try something different. I hope to draw from them myself.

If you have any comments or questions my email is dave@mrdavepizza.com. I also post positive game reviews, so head to the top, or just go to the main page at MrDavePizza.com, and explore if you like. I am a solo operation, but I don’t mind communicating.