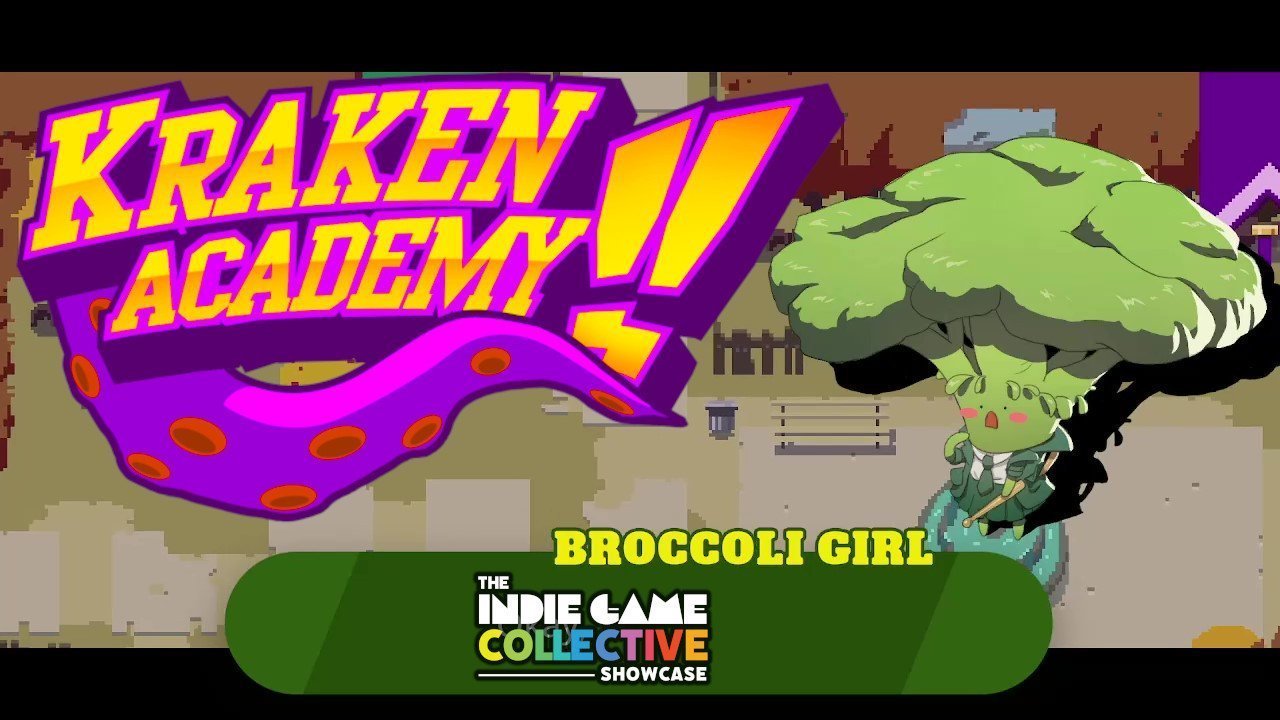 Kraken Academy has been on my mind since I first eyed a trailer of it some months ago. “I have to play that one,” came to mind. Many of you are probably familiar with my love of visual novels. And in this case, I’m working with a combination of visual novel and interactive fiction characteristics–an all-things-aside awesome and hilarious game. Explore the bizarre introduction to Kraken Academy with me, and I’ll explain why you might start loving visual novels after all and why you should continue to if you already do.

“Kraken Academy” is the first in a handful of showcases I’ll be doing here as part of “The Indie Houses” Steam event through my community at Indie Game Collective. I don’t usually boast about this kind of thing at the beginning of my reviews, but I am very grateful for this opportunity, I’ll say that.

Thank you to the Indie Houses Event program and my buds at Indie Game Collective.

The Weird World of Kraken Academy

You’re in the car with your sister and mom off to a new academy. After arriving, the grounds are a bit… off. As in, there is sludge and trash everywhere. This is a respected school? Yeah, that is intentional. It’s not totally revealed in the demo, but absolutely everything is messed up for some reason, and I think it has something to do with soda pop?? I admit, I’m drinking coffee out of a Ravenclaw mug, what of it? Heavy HP allusions here, but nothing infringing, and mild parody is enough to make a subtle nod in my fandom categories but provide something totally weird and new, plus hilarious.

When you attempt to enter the school grounds, a security system denies you for not having an access card. There are some different options here, but I just paid the creepy guy by the gate my lifesaving for a security card. It was impulsive, but that’s one thing that’s fun to roleplay in visual novels for me.

I should definitely affirm for you though, this is not just a visual novel. There are interactive top-down RPG elements, and some basic puzzle solving. You can choose either easy or hard when you start a new game. I went for easy, like I normally do because I prefer bumper lanes; that’s just what I do!

It probably sounds kind of weird to reference RPGs as a source of potentially used game inspiration, while just having said it’s not exactly an RPG, but also kind of acknowledge that it is. Add on that this game is equally as much a dating sim. Plus you’ll physically wander around a pixel art academy and go, on what I presume are several missions to complete the game. Take all of that and I can’t remember what infomercial that’s from, but it’s a good one: “Set it. And forget it.” Did I mention I like easy games?

Actually, it’s more traditional to refer to these games, at least on Steam, as interactive fiction. That wraps it up–on Steam. I had no problem finding anything in the game or knowing what to do.

I’m always up to causing the most amount of trouble with the least amount of liability for my characters. Kraken Academy had no problem accommodating that. I think, specifically, about my interaction with a delightful little character named “Broccoli Girl.” Yep, she’s a cute broccoli person. Why not?

And why not is also totally it. It’s like the devs took everything they could think of and just said yep, we’ll do that, it’s hilarious. Broccoli Girl sends you to the lake to get a costume for her party.

What lurks in that tentacled character silhouette that appeared in the woods? Oh yeah, it’s Kraken! The namesake of this game! He gave me a demo mission to collect an amulet and some tentacle pieces in the trash, which again is everywhere. The majesty of the Kraken is pretty amusing. He’s flippin’ humongous, about the size of the lake. And as usual, every character in this game is hilarious.

What I Hope For In Launch

When comes to what I want from the launch, the first is more Broccoli Girl. There was plenty in the demo, but I still want more Broccoli Girl. The moment I saw the tufted, verdant branches of her head’s face area, I said, “that’s the one.” I’m just kidding, I have no idea if broccoli people are even a real niche? My logo is a face made out of pizza though–do you understand the level of reciprocation here?

I get a kick out of visual novels with any level of anthropomorphism. I find it very fascinating to look at. At times, I cross into animistic idealism which is way the heck out of the scope of this showcase, but you know–animal, vegetable, mineral!

Plus, I definitely want to see the Kraken mission solved, but I sincerely antipicate that is a given.

Mostly, I just want to see this fleshed out. There was something I didn’t explain enough, that I will now, which is: the character art for the dialogue is exquisite. Everything I love about visual novels is captured in these custom art caricatures to an extent that absolutely thrills me! From the buttons on people’s clothes to the inspiring facial expressions, it just looks so good. Combined with the hilarious dialogue and context, it’s just really really neat.

And those are my thoughts.

Thanks For This Opportunity!

I hope that gives you enough of a written preview to make a decision on what’s available in Kraken Academy. My time with it was better than I thought it would be, and that’s just so nice because I was hoping for the best.

In the meantime, thank you so much for reading Mr. Dave Pizza, and please come back again!

Mini Racing World is one of the Most Unique New Racing Games REVIEWJuly 30, 2021
HotShot Racing is A Refreshing New Take on A Genre REVIEWSeptember 10, 2020
Subscribe
Login
0 Comments
Inline Feedbacks
View all comments