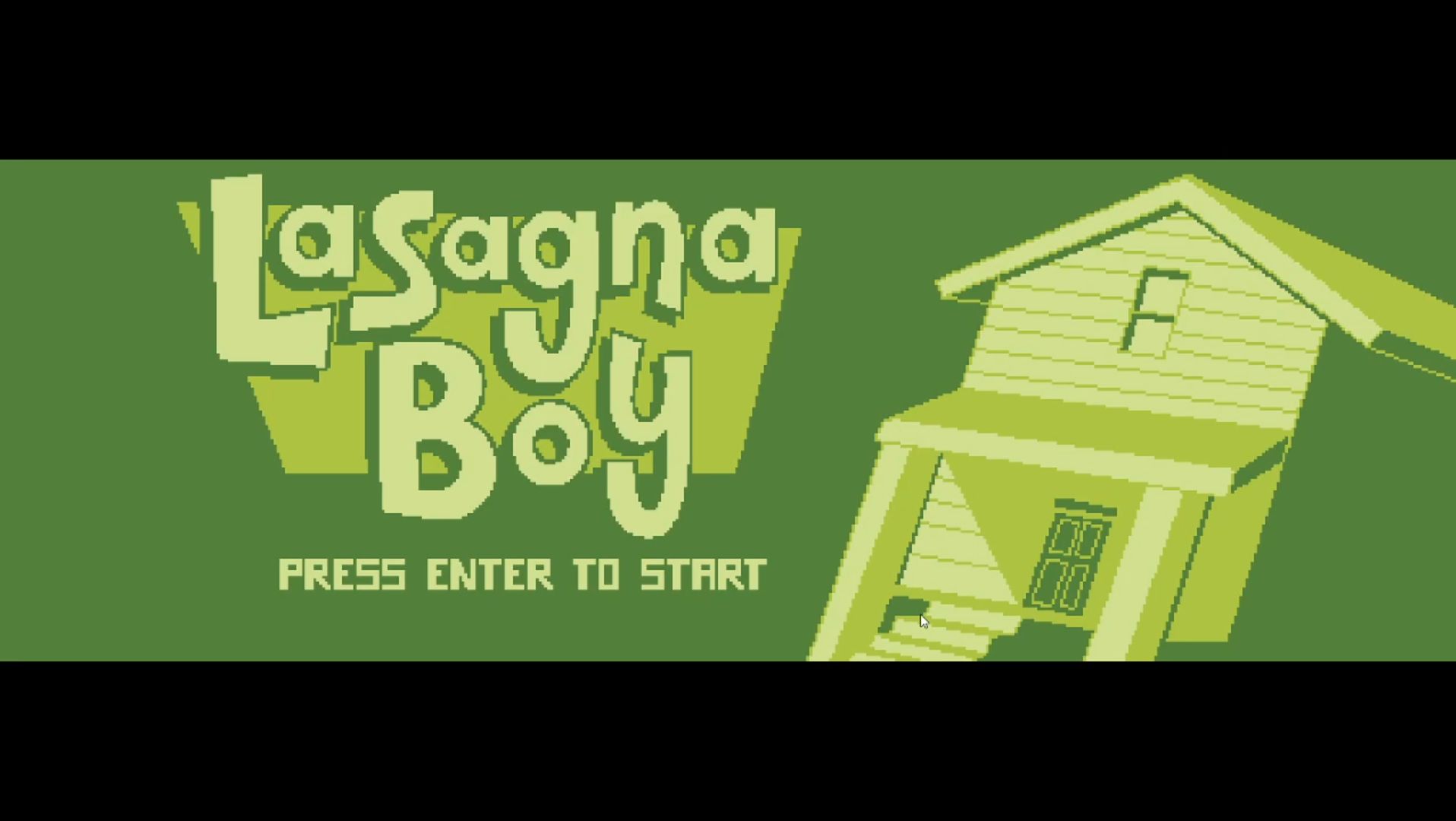 “HEADS UP,” Moderately creepy imagery is in Lasagna Boy, this will be my only warning. I don’t generally review horror games, but Lasagna Boy made me laugh, and then, it intrigued me. It merits analysis based on absurdity alone but also on design.

I also personally understand people like illustrating and drawing creepy monsters because… well, it’s fun! Why not throw in a third or fourth eyeball here and there? We’ve been doing that for ages. Direct link to the games on Itch.IO a the bottom of this article.

Lasagna Boy – Umm, Why is This Not Pizza?

The experience that is Lasagna Boy really didn’t make any sense initially, but I moved past that and got pretty into it. It all started one Monday… We were bunking off.

Lasagna Boy is a Game Boy aesthetic solo project of Trashy Rascal Studios, published on Itch.IO. There are two major versions of it though. There is the Classic version, which is what I tried first. And then a version called the Alpha Demo. I tried the original, and when I started writing about it, I noticed a newer one. I recorded some gameplay of both until they used an old-school game mechanic that I’m not great at, making me use my brain. Mannnn…

My draw to this game was a stupid quest to make a Garfield joke that somehow related to the topic of indie game development. Apparently, there’s a whole Creepypasta-type narrative for Garfield which, I got sucked into like a lasagna vortex. That’s okay though. If you’re unfamiliar with Creepy Pasta, it’s basically a forum/wiki thing where people turn anything and everything you can think of into horror stories, but it’s kind of funny sometimes.

I’ll start with the Classic Lasagna Boy. You’re a lasagna delivery boy named Jon. <eyes glaze over> You deliver a lasagna to a house, and you’ve probably chased down halls by a weird, creepy mutated giant “cat.” It’s really more of a monster though.

As you shuffle-shuffle between walls for cover, you can find items in drawers and cabinets. If you find yourself exposed as the monster walks by, he will devour your head. WHAT THE. It’s kind of funny though. And you get 6 lives, so that’s not bad.

I think the level of “horror” elements is pretty good in this version. It’s enough to make your eyes widen but not enough to upset your stomach. Pretty good for a laugh, without being really weird or desperate.

That classic version had a pretty decent amount of fanfare, which shows you the power of Itch.IO. But the newer “demo” version which was made later is what might drive this game into being a cult classic. The pixel art is bright and vivid. It feels more fluid than the previous, but it also has a few bugs because it’s got a few more moving parts. I won’t focus on the bugs, because that’s not fair for a solo project. I think it will probably be cleaned up or picked up at some point though because it’s really quite interesting.

It’s essentially a completely different game from the first one, but it has the same clue narrative and opening levels to find more clues, etc. Actually, maybe it’s not that different, but it’s a different environment. Weirdly, this game reminds me of a classic NES game from the 90s called Nightshade.

I’m not saying that the style and themes of Lasagna Boy are based on Nightshade, although that would be pretty cool. I guess it’s a possibility though. I’m just sharing an observation. On the issue of chronology though, the Game Boy aesthetic is one reason people love it so much, which fits nicely with this possible meta origin.

I never played anything as weird as Lasagna Boy on my own Game Boy in the olden days, but it certainly would be amusing. It also softens the ease of playing this game. There’s only so much creepiness you can experience while playing a Game Boy game. I love that.

The newer version has tons of interaction compared to the classic, but you’re not going to see this much complexity in a solo project every time you google something weird. Or maybe you will, I don’t know. Don’t take things to seriously.

Lasagna Boy – Well, That Was Weird

I kind of preferred the classic, because it was simple and funny, but I didn’t get too far because I died before I could figure out what I was supposed to do. I may try it again. And when I died in the demo, my body was gone, so yeah… Haha. Haha. Still a pretty fine game though, no? Happy Monday.

Oh, and hey, do you like Game Boy indies? Check out my review of Dogurai.

Thanks for reading. Check out more articles at MrDavePizza.com. Here are links to both the classic and current demo on Itch.IO.