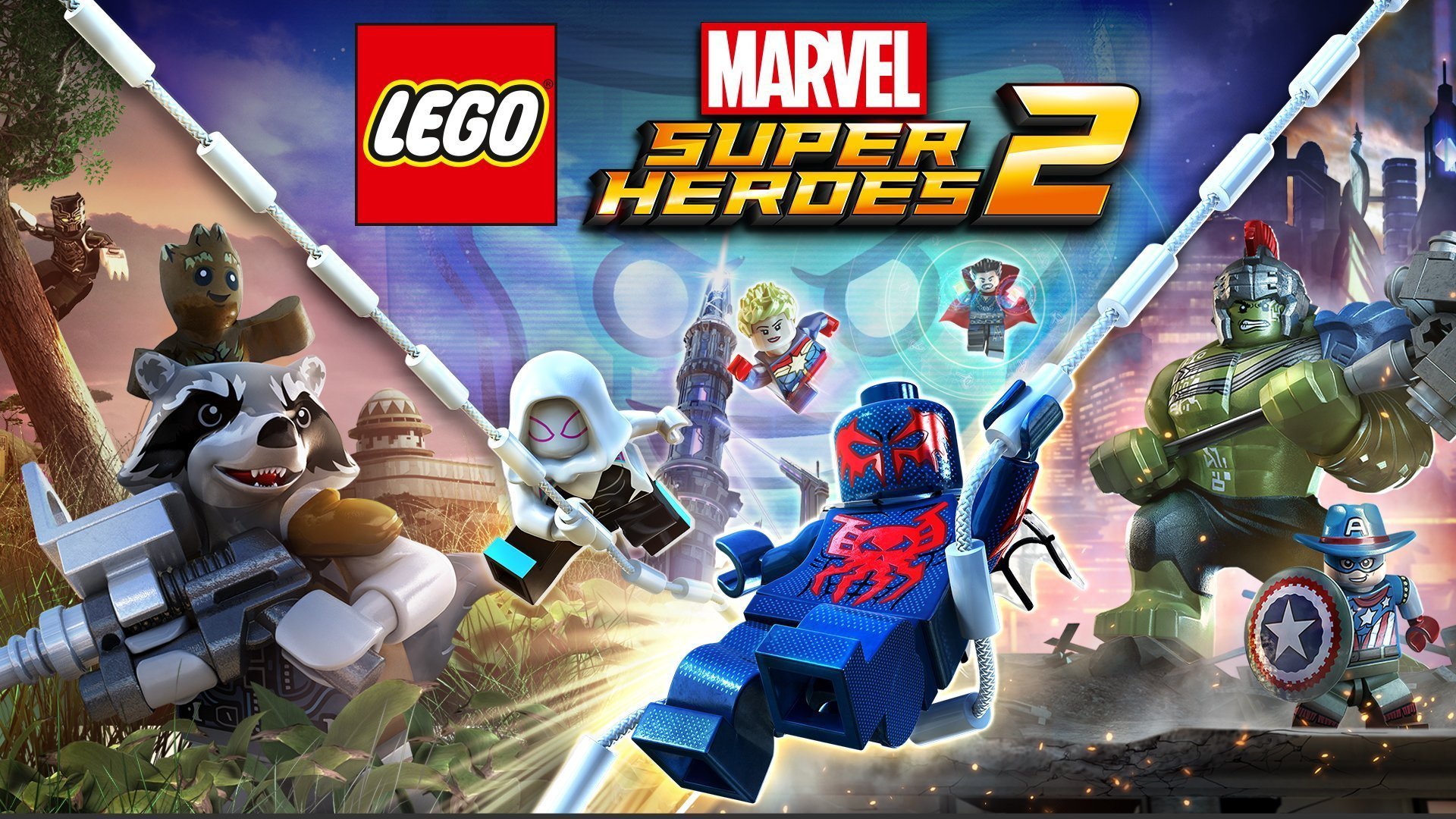 The subtitle “It’s All Here” says it all. I’ve tried a few Marvel games over the years, and I’ve seen a good handful of the movies. Never really delved into the comics, but I feel they are well represented in LEGO Marvel Super Heroes 2.

I went into this game thinking maybe it’d be isolated to Avengers characters without much divergence. There are PLENTY of Marvel Heroes in this game though, and you’ll have no trouble finding them. Within the first couple of chapters of game I played or interacted with the Guardians of the Galaxy, Thor, She-Hulk, Wasp, Gwenpool and more.

Getting Started in LEGO Marvel 2

I feel it is pretty safe to say that the nature of this game is like a flower that blossoms into its true form. As I jumped into a smoldering city with Star Lord and the gang, I had no idea what to expect. The more I played though, I recognized something I experienced in previous LEGO games. There is a lot of flash and bang and oohs and ahs, but you do not have to be a hardcore gamer to figure things out or defeat the enemies. There’s really no penalty system at all actually.

For example, this guy, the celestial. When I saw him, I thought, oh great, this one of those final dungeons of the Black Citadel kinda scenarios where the boss eviscerates your chronological existence with a wince. I was wrong though. It was actually pretty easy once I figured out what to do. and if you want to know, just jump around and look at what character portraits show up in different areas. They tell you who in your group can solve the next step in the mission.

Cheating is Encouraged! (in LEGO Marvel at least)

So, there are different methods and perceptions on how to cheat. I generally don’t do it, but only because it is usually not even an option in most games these days. Gwenpool, a character I just discovered existed, holds residence to a room in the Avenger’s mansion, and she tells you all about cheating using the TV and pink blocks. I was very excited when I saw this, what a great, transparent way to reveal this option. You can find the cheat codes with a quick Google search at a number of sites, and I have also included a list below.

Just enter the cheat code and unlock the corresponding character. Here’s a list:

In addition to cheating this particular way, which is actually more of a nifty character unlocker, there is another way: WALKTHROUGHS! You may be aware that if you look on Youtube for game walkthroughs you can find one for almost every single game. I had to leave one open on another screen nearly the whole time I was playing the game. These LEGO games are not painfully difficult, but they’re not always obvious either. After I watched a video on destroying the celestial and rescuing a bunch of civilians, I got the same amount of satisfaction as I would have figuring it out on my own, maybe more.

If you play enough of these LEGO games you’ll start to realize there are some patterns, and everything is cool, just relax! This game is so family friendly that I really appreciate its existence in my game library. I think if you like Marvel this would be one of my top suggestions. It’s all here and it is challenging but not TOO challenging

I was a little hesitant with this title. I really wanted the LEGO universe above all, but it’s been so long since I saw a Marvel film. Also, I wasn’t sure if it would just be some overload of superhero content that I didn’t understand. I would suggest watching The Avengers first before playing this, but you don’t have to. If you’re like me, you’ve probably run across enough Marvel superheroes in your lifetime just by their sheer presence in popular media. That’s all you really need.

A few years ago I bought a She-Hulk and Spider-Gwen Funko Pop Set. I feel like that purchase has finally been justified. I got it for like $1 at Barnes and Noble, so I figured why not. This game has made me remember the quality of the Marvel franchise. My last viewing was Thor: Ragnarok, which was absolutely bonkers, but I still liked it. And yeah, DC comics is a bit more serious, but that doesn’t really mean anything, and I don’t think one more superior to the others, they’re different.

This game is totally solid and it is available on a number of platforms. If you wait long enough it will pretty much always go on sale at some point. Don’t get frustrated with it if you get stuck, there are lots of videos, and if you know a little more about LEGO games, you’ll probably be okay. Many of my followers have expressed interest in LEGO content, so that’s why I chose this game. It won’t be my last either.

Thank you so much for reading MrDavePizza.com. If you enjoyed this article or photos, feel free to share it with one of the links below. I’m very active on Twitter, and you can read most of it from the main page where there are more articles. Happy holidays, friends.