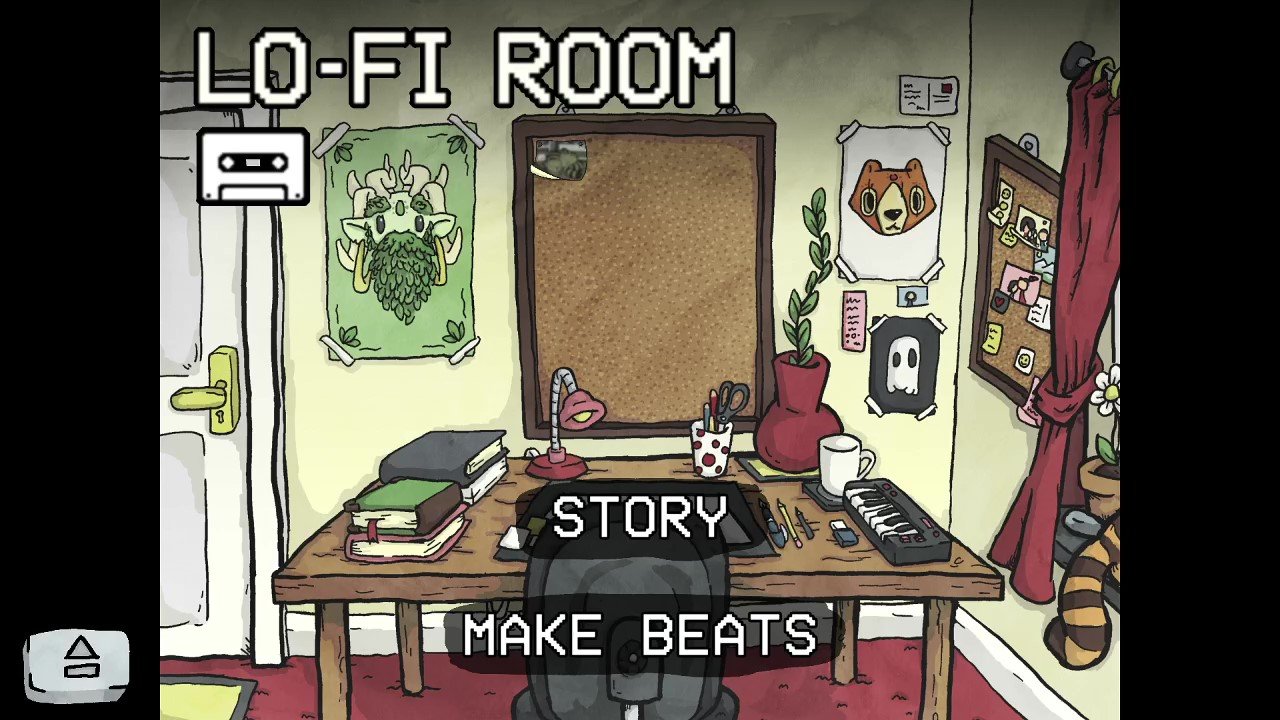 I had the privilege of playing an itch.IO demo today called Lo-Fi Room. It is a member of the rhythm genre. It’s taken on a new kind of life within the indie game scene though. You can search game databases for games that have tags like “rhythm” or simply music. There are incarnations of this genre for Android and iOS devices as well. Developers have really gone hog wild with the possibilities.

The genre that games like–well not “like,” more like specifically–Guitar Hero started became renowned for living room jam sessions amongst a vast network of roommates. That’s kind of more specific to my own acquaintance with it, but I feel there is probably some truth to it.

You could strum out to a waterfall of string notes to play Tear for Fears or Freebird till your heart was content, or at least until it was the next person’s turn. There was even a sequel called Rock Band, which you could use with drum pads for a microphone. I’m probably not telling you anything new, but why not.

The game style, I think, has its origin in adapting the classic Dance Dance Revolution (DDR) games where you jumped around a hopscotch-like platform to hit notes with your foot steps, I’d say the origin is probably heavily Japanese. All of this still exists, but when I think about it, I haven’t seen these games on Nintendo’s newest Switch platform when I think about it, hmm.

In a Cozy Lo-Fi Room

The game opens to the bedroom vanity with options of playing in story mode or straight to the music. You explore a hidden object scene for each level in this same room. Around the scene are scattered musical instruments, which you must find to play a portion of a larger composition that moves the story along. Despite the straightforward scene images, they can take a few moments to locate.

Lo-Fi Room is not in any way indignant about pace or topic heaviness. It’s a chill game with some cool art. The only issue I had was the standard learning curve for these games.

I’m eager to tag the stylizing as distinctly reminiscent of an indie comic book. I can’t quite place any comparisons. It’s a cozy room though, with books, instruments, trinkets, plants, cats, and color-splashed comfortably around a small bedroom. There’s a girl at the focus sleeping and then reading.

I love many things about this. I don’t really know what the story is going to be, but look at that, a cozy beanbag chair, a kitty on the floor, a cup of coffee, comic books, books, and some sweet art on the wall. The girl reading the book looks really comfortable. I wonder if this is based on the creator’s own current habitat.

When everything is put together, the final song compilation is pretty good. A lot of people were commenting on the Itch.IO page that they liked the music and I happen to agree. And as far as aesthetics go, this is pretty successful at being a lo-fi indie concept from the artwork to the music to the gameplay. I dig.

The current incarnation of this game has 3 levels with a hopeful promise of more coming soon. It should only take around 15 minutes to get through. I enjoyed it though. And the final song is pretty good. So, check out Lo-FI Room by Bearmask here: https://bearmask.itch.io/lofi-room.

More games at MrDavePizza.com Also find me on social media, links at top.