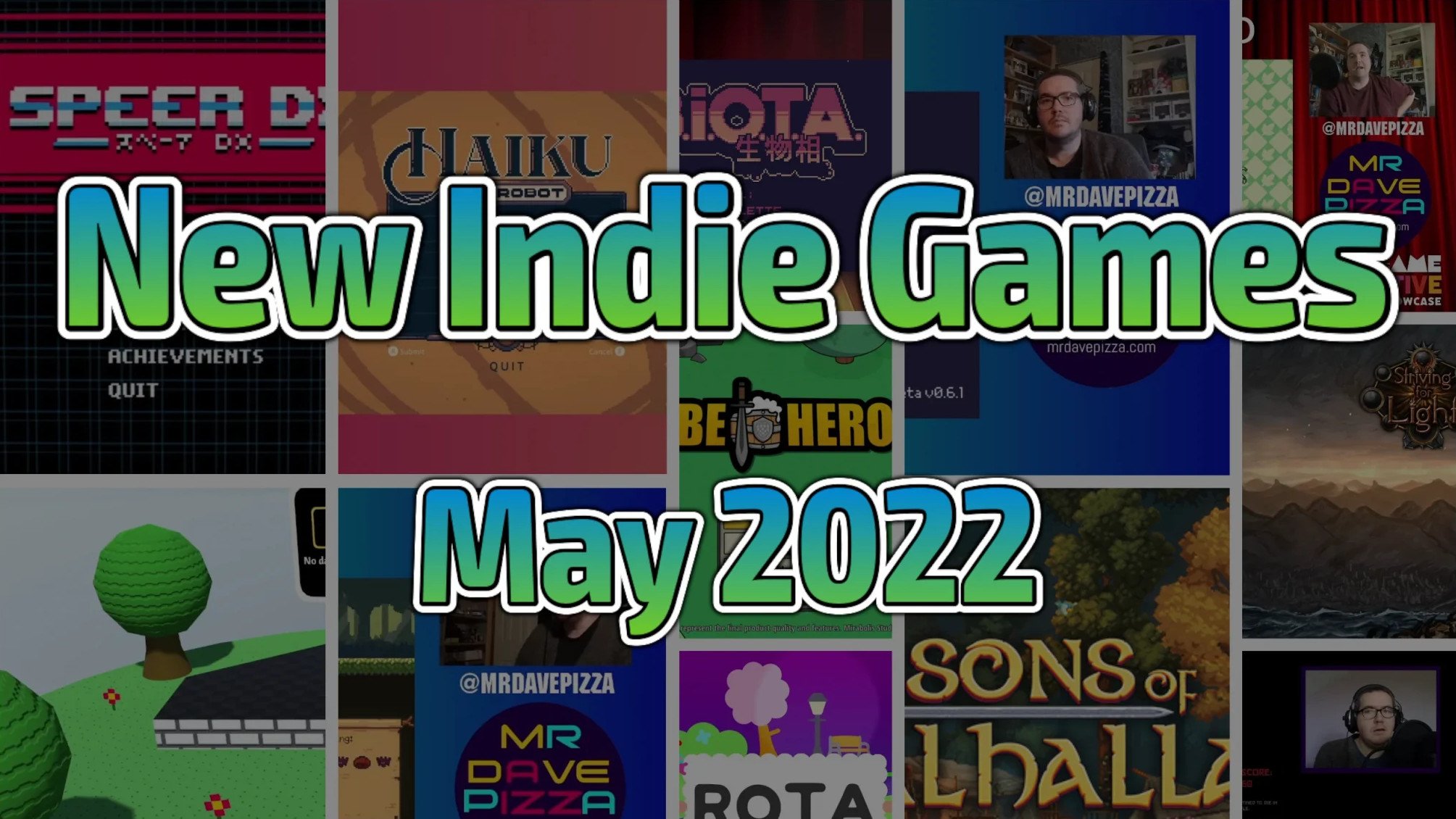 Ah, so many new ways of doing things here at Mr. Dave Games. I think probably the most notable change has been the expansion of my YouTube operations. I’ve covered a whole 18 new indie games this month, including one switch game (Vesper.) If you think this is a lot, wait until next month, when things are going to get very serious. I’ve also uploaded three new tutorials to my channel, which are doing great. Woo hoo! Okay, yes, YouTubing showcases has allowed me to cover more content, but this blog is just as important and as I pursue new projects, this one is just as important for me. So, as a kind of hybrid concept post, let’s go over what was played in May 2022.

The big event was definitely Galacticon in the first week of May. I was so hesitant with that one because of the authenticity of the retro feel of it. It ended up being one of my favorite games though, and I showcased it for Flynn’s Arcade coinciding with the Indie Game Collective showcase for it. That ended up being pretty great.

B.I.O.T.A. was a recommendation from CSHPicone on Twitter when I offered up my quest to play more Game Boy Style Games. These little themes I go with tend to run about 3-4 games and then I get seriously distracted by something awesome. B.I.O.T.A. was such a cool game though, that it left me satisfied from the perspective of platformer indulgent. Definitely a great review and a fun game. Oh, by the way, this was just the demo, but it was an awesome demo.

Jaded – Demo was a really tight demo that was a total shocker because of being so complex for what is essentially an indie beta. The monsters on the levels were still in development, but I found the game challenging and just the same either way. This one was a pretty big hit for friends.

And, Peglin – Demo. I felt like I had pulled a fast one here, just by the fact that it gathered a crowd, even though I was just playing the demo again! I watched a few people play this on Twitch, plus it was also showcased by the IGC, and I felt like I got to experience the whole game. For recreational playing of insane Pachinko-style fantasy RPG roguelikes (steps away from the mic to breathe), this is the one and only right now.

Vesper: Zero Light Edition was very cool, and I got to play it on my Switch (a rare offer.) It definitely has the coveted Hollow Knight aesthetic like the old times, but wow. It was like a full cinematic experience. I get Switch games thrown to me every once in a while, and if it’s here there was something I liked, but Vesper was like getting asked to review a Kubric film. So much darkness, but filled with softer features and gentle additions to regular mechanics. This game rocked and has my full endorsement for the current platform market on Nintendo Switch.

Rotund Zero This was another Game Boy style indie I covered for the Indie Game Collective. It had the elements that combined make it a niche challenge. It’s a sort short, and crisply sweet game that intrigued my platformer perspectives. You have some level of control, but mostly are just bouncing at the whim of the game hoping to make it through. It was interesting to find out this was not technically the independent representative of this franchise either, when I read that this idea traces its roots back to the Wii U. Wow!

Haiku the Robot Dark and brooding, a robot dystopia. Oddly enough, I’m starting to get a vibe for robot dystopias, and it’s a weird thing to feel anything for. The elements of this game that are compelling are not the individual characters though, it’s rather the shimmering traces of spirit in a grim fiery inferno. Kind of depressing actually, but a really good game.

Firegirl: Hack and Splash Rescue was a round two showcase for IGC, since it actually came out several months ago, but it was new to MrDavePizza. I felt so bad that this game had a troubled launch. There’s just no room for error in this game market. But the game is fixed now and I’m glad I got to try it now. It’s quite fun. You can launch yourself up stairwells with your water pack! It looks great too.

Haiyai This was a game I was really looking forward to, and it was worth the wait. I haven’t done a whole lot of combat games on MDP, but it’s amazing how well this concept works. Just drag your mouse cursor through as many enemies as possible before the red bar runs out to unlock new features and achievements. This game is so affordable too for anybody, so check it out if you think it looks cool!

This is when the content train slightly took a pivot, as I focused strictly on YouTube. I have no intention of stopping either, but these showcases are not covered here on my blog anywhere else but here, so all these links go straight to the let’s play videos! Anyway, I’ll talk about this week’s bustling line-up.

Be Hero – Early Access A cartoony and comedic RPG that’s not quite done yet but showcased to a positive response from viewers. Explore Beersland and unravel the mystery of a young hero’s destiny (except, he’s too late.) Should be an interesting final release.

Mython Island This is a monster collecting RPG. Two RPGs in a row is rare for me, but YouTube makes it possible because they’re difficult to write about. Anyway, it’s a cool alternative to Pokemon in a nutshell, with indie vibes and some stellar music! I barely made it past the first level but it would be interesting to explore.

Video Game Fables Another comedy dev here. Imagine an old-school Mario game, a parody at least, where the princess has to save the king, and cliches are taken head-on. I played a good slice of the intro to show you what it’s about. It’s still got a while to go before release, but the game made me smile, even though I was frustrated with a botched recording attempt!

Void Prison Ah, YEAH! Like the segment from that old Nutrigrain commercial. This game is off the hook. I don’t even know how to play games like this, but I was getting really into it, even returning to see if I could rank higher on the leaderboard. Just avoid the outer ring, that’s all I’m sayin’!

APICO Goodness gracious, this game is cozy. It’s a pixel art beekeeping simulator. Even though I really only went into the tutorial, this game has soooo much to do. You can explore, breed new bees, build structures, craft mead, whatever you want! I didn’t know bees were so helpful! Anyway, I really encourage you to see what this game is about because it is as sweet as honey.

And for the final week.

Striving for Light is a dark and creepy roguelike. Very cool though. This is perhaps one of the darkest games I’ve covered since Hades. I had to put a disclaimer on my video because the giant spiders were so dang scary looking. It has an unexpected comfort to it as well though since the illustration is all handmade. It does look good, and I’m glad it made it here.

[Speer DX] Another crowd pleaser. So, you wanna platform with a spear? This is the game for it. It’s so simple and minimalist, but it looks good, sounds good, feels good, feels good too–uh huh, that’s right… Yeah, had a blast with this one too, and got to prove to my viewers I can solve puzzle games as well as Pursuing Pixels! Okay–maybe not THAT good!

Sons of Valhalla – Demo I took this one upon myself to cover, because I feel like I could play any decent demo these days and people are like slurping it out of a big communal jug. Okay, that was kind of weird. Anyway, this is a really interesting upcoming base-building sidescroller (which I didn’t even know could exist.) I was just casually checking this one out, but it was sooo good. It really reminded me at parts of a pixel art Norse version of the Warcraft series. Check out this demo, presuming you’re okay with realistic pixel-animated combat.

ROTA And last but not least is ROTA! It’s a really cool puzzle platformer that works by rotating the world around you as you turn corners. It’s so relaxing and pleasant to look at. I really appreciated the dev Harmony Honey for reaching out to the IGC for this one, because I loved playing it. If you watch the video you will probably want to as well.

Thank You For Reading and Watching!

Wow, what a month. I hope you all enjoyed learning about those games as much as I did. I’m going full force on YouTube plus tutorials right now, so if you don’t see it here, see it there. I will definitely be covering some more stuff here on the blog though. I’m kind of hoping to reserve this as a place for commissioned showcases and tutorials, but who knows what will happen.

Thank you so much for reading MrDavePizza, and enjoy your games!