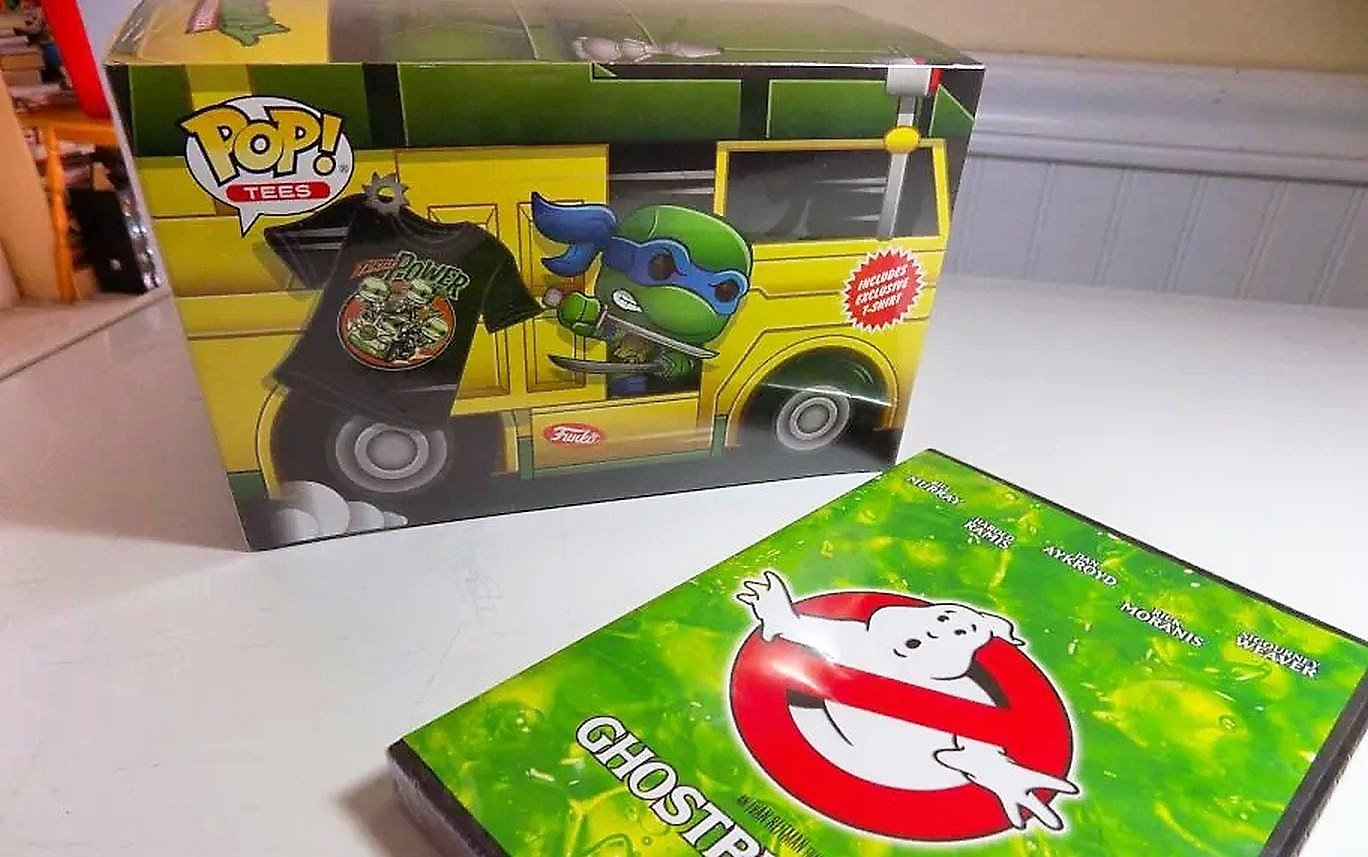 I read in the news that shipping bottlenecks are uncomfortably poignant this year. It’s like every time we get some new way to make things faster, the system gets flooded by shoppers. I wondered even if I should order anything at all. In the process of doing some gift shopping, however, I saw I could get some more stuff for free shipping. So, I picked up this Funko Pop Teenage Mutant Ninja Turtles cardboard turtle van packaged t-shirt. And because they had it, I grabbed a DVD of the original Ghostbusters film DVD for $5! I don’t do many unboxings here, but I could start. Enjoy some pictures and a bit of brief commentary.

It’s pretty exciting to see pop culture icons from my childhood on products like these. The van looks perfect, and the outside art on the Ghostbusters DVD is very suitable as well. They’re practically kindred pop culture spirits in a way. I’ve seen the classic slime cover for the DVD in the past, but for some reason, I never thought to get a copy until now. Pro-tip, I have a Blu-ray player, but I’ve learned there is almost no difference in Blu-ray for movies that were filmed before this technology even exists, so this DVD is probably the best you can get, but there may be benefits here and there to blu-ray; it’s up to you.

Look at all the features too: “Filmmaker’s commentary, Deleted Scenes, Making-of-Featurettes, and Storyboards.” Heck yeah! All for $5! I used to always watch this kind of content on DVDs, and why not again with the line-up cast of this particular film.

As for the shirt. I like the packaging and concept. I am not really fond of the Funko POP graphics on the back of their T-Shirts. The graphic is neat, and actually, it’s the neat graphic that inspired this sentiment. This is my second Funko POP t-shirt, the other one was BB-8. I’d love the Bebop and Rocksteady shirt, but I think it is the same.

Both items are 5 stars as gifts! Basically, they were gifts, from me, so thank you, Dave Pizza. You’re welcome Dave Pizza.

I’ve been contemplating doing some flash fiction up here on the site. I wasn’t sure that this unboxing would be enough for a standalone post, but, there’s quite a bit here. Also, I’ll probably return to the flash fiction idea. If you are interested in Ghostbusters check out my remastered game article here: Ghostbusters Video Game Remastered: Freaky Switch Review.

In the meantime, thank you so much for reading Mr. Dave Pizza. If you liked this article please have a look around, leave a comment, and stop by again. I really appreciate you taking the time to read this. Have a nice day!