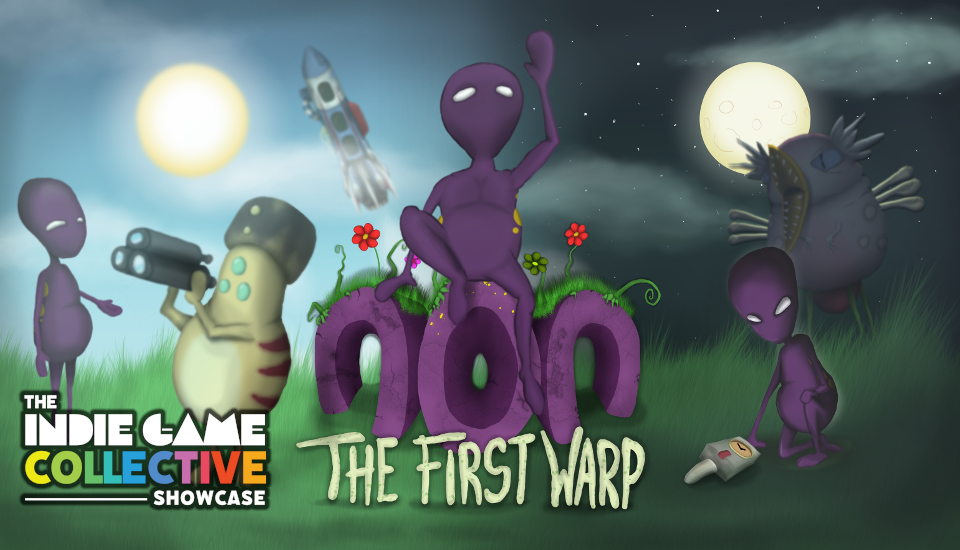 “non – The First Warp” is a unique puzzle platformer released this summer. It stirs up themes of hypnagogic-like environments and alien sci-fi worlds, that feel like a strew of estranged organs and strange puzzles. Okay, I’m in. Play a purple alien in this squishy puzzle environment, where clues seem to live within the structure of the game like some giant biological telephone book. non – The First Warp never seems to push the envelope to uncomfortable levels with its weirdness, but it will require innovative puzzle-solving. Like on the level of classics like the game Myst. Am I comparing this game to Myst? Not really. But unless you are going to head straight to YouTube for the walkthrough, you’re going to need to spend some time with it just like that classic.

With some clues in my research and some hands-on play, I’ll share my impressions of this unusual but intriguing indie game. Let’s get started.

Thanks for the collaboration between Indie Game Collective and publisher Black Grain Game.

I guess I went into this game maybe a little too optimistic. It is hard as moon rocks. I have a good track record of being able to load up a game and start screen-capturing without getting stuck. So, I hate to say it, but I’m going to have to admit that non – The First Warp defeated me first. In fact, I got a really strong vibe of old-school 90s video games where you seriously have no contextual clues on what is going on. With some practice though it is possible, and there are copious clues around that are actually pretty engaging.

It seems the first puzzle is based on sequential operations. Squished into the wall there’s a chart of some kind of formula or pattern that unlocks the first puzzle. I’m glossing over something super important, however, which is the time warp function. Of course! What alien puzzle could exist without copious manipulations of the time-space continuum? (Stephen Hawking voice: This is the type of game I am talking about!)

Here are some key features from the developer:

With the time warp function, you can manipulate the puzzles in exactly the way you’re probably thinking. If you don’t like things how they are, just juice them with the ol’ time warper.

The developers describe the pace of the game like this, “Zen feeling, no stress, take your time, save and come back” I think that is pretty suiting; I’ll tell you why.

As I mentioned above, there is a walkthrough available on YouTube for non – The First Warp. The first level video is over an hour-long, and there are many sections. They mean business! There is nothing wrong with this either. I always want the best impressions and all the facts right away, but many games are quite good because of how long they take.

I really want to explore this idea more, but, for now, it’s something like this. If the experiential quality of an experience is based on how much it has to experience, then the level of quality for a game is the amount of monetary investment you make in the game, and how long you can play the game. If you’re a puzzle gamer you’re used to this concept probably. I thought this was kind of strange when I first experienced these reviews on Steam for games saying “Really relaxing and interesting–Time spent playing game 3700 hours.” This game isn’t that long, but it can take a while, which I guess is good!

As it turns out, non – The First Warp clocks in with a serious price-to-content ratio! The advantages of indie bargains on Steam repeat once again. And if like I said, you’re a puzzle gamer, that’s a whole lotta puzzlin’.

A Few Words on the Art

The art is actually quite good and stylistic. It jarred me at first, but it’s got a kind of handmade ToeJam & Earl kind of vibe. But honestly, must have taken forever to make all of this. There’s definitely an outsider art approach here n the areas and screens I experience. But it is cohesive and, along with some interesting game audio design choices, it’s darn creative.

Well, that’s it for non – The First Warp. I encourage you to check it out! (Steam Link Below.)

That about wraps it up for today, I’ll be lurking on Twitter until tomorrow, inevitably getting involved. Thank you SO much for reading Mr. Dave Pizza. If you like what you see, please have a look around, and please come back again! Thank you!