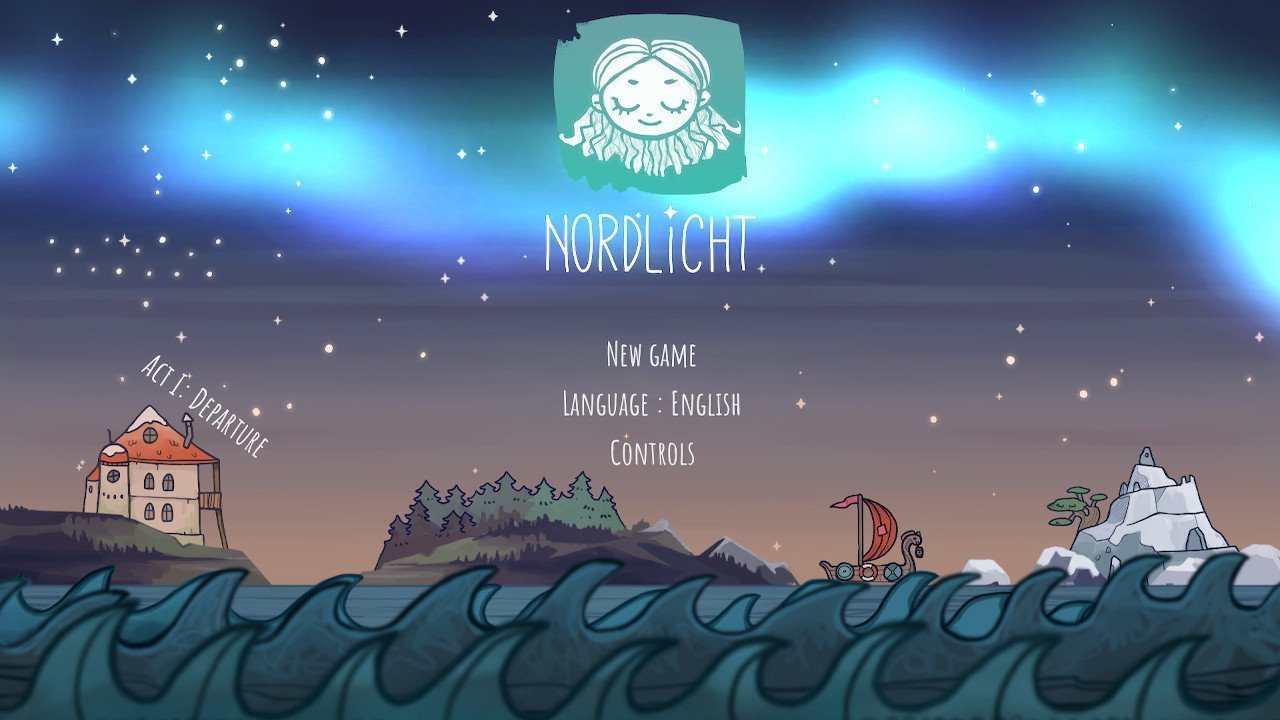 I feel privileged to review this game since there seems to be sparse information elsewhere, but I think you’re going to like it. At only $3.99 on the eShop, the regular price, it’s a great deal with sophisticated gameplay for the casual gamer or family. You can probably complete it within a couple of hours depending on your detective skills, but it’s a generously paced experience.

Nordlicht is a family-friendly storybook stylized find-the-object game with casual references to Nordic life and the lore/mythology of the Viking culture in an anachronistic presentation. You investigate diverse levels with hidden objects and puzzles to solve to complete steps in an adventure story. I think this game would be fun in a family setting, but I found it intriguing enough to investigate as an adult.

It’s always funny when I try to think about what I might say about a find-the-object game, although they are quite popular. At basic ground level, I could say, “I found a book, a jar, and then I did that again in a different way.” One thing nice about this game is that it is not simply a matter of looking at object shapes and then checking them off the list. If you are into that, that’s okay too, because there are elements of it that are like that. Most of the items you find in the game, however, have multiple levels of detective work required before you can collect each on the list.

Let me share an example of one of the items to find in the first level of the game. The lantern, an item on the list, is found in the attic of her house on a shelf. To complete the task of retrieving the lantern, however, you need to find oil for the lamp. Eventually, you’ll discover there’s an oil spill on the kitchen floor downstairs, one of the countless things to notice, and the only way to get it is by using a sponge you find somewhere else, in another room, to sponge up the oil and put it in the lamp. These little diversions are pretty rewarding.

I noticed that some of the comments I could find about the game said it takes a while to progress. That’s actually one of the best qualities of the game though. You shouldn’t expect that you’re going to find a satchel of lamp oil on a troll, this game is more casual than that. Nothing seems broken in the game though, I never felt I had gone too far and had to start over. No worries there. You will have to try things a couple of times though.

Also, there is a nice walkthrough I found on YouTube that helped at parts. Since there is no sequential order to retrieve the objects, you really only should need to do that in a hopeless situation. I was confused about a couple of things that led me to that walkthrough. If you use the magnifying glass in the upper corner of the screen as well as some earnest reasoning though, you will be alright.

By the way, the story in the game contains a major plot point involving an adventure trip across the sea to visit the main character, Aurora’s, mother. Once you make it out of  Aurora’s House, you’ll board an old ship, which looks like a Viking ship, and you’ll go on your way to the rest of the story.

You’ll realize fairly soon that some strategy and traditional gaming skills will help take you forward, especially seeing as the ship immediately encounters a turbulent storm at sea! I have no doubt that you’ll find this game to contain complexity and deep emotional themes but easy to pick up. It’s a nice game, especially for the price. Despite the cursor style point and click gameplay, it is very easy to play with a controller on Nintendo Switch. You can also find it on Steam at a good price, but either one should be fine.

Check out more articles and reviews on MrDavePizza and if you want to get in contact with me, send me an email at dave@mrdavepizza.com, or check me out on Twitter at @MrDavePizza. Thanks for reading and stop by again! New content regularly.