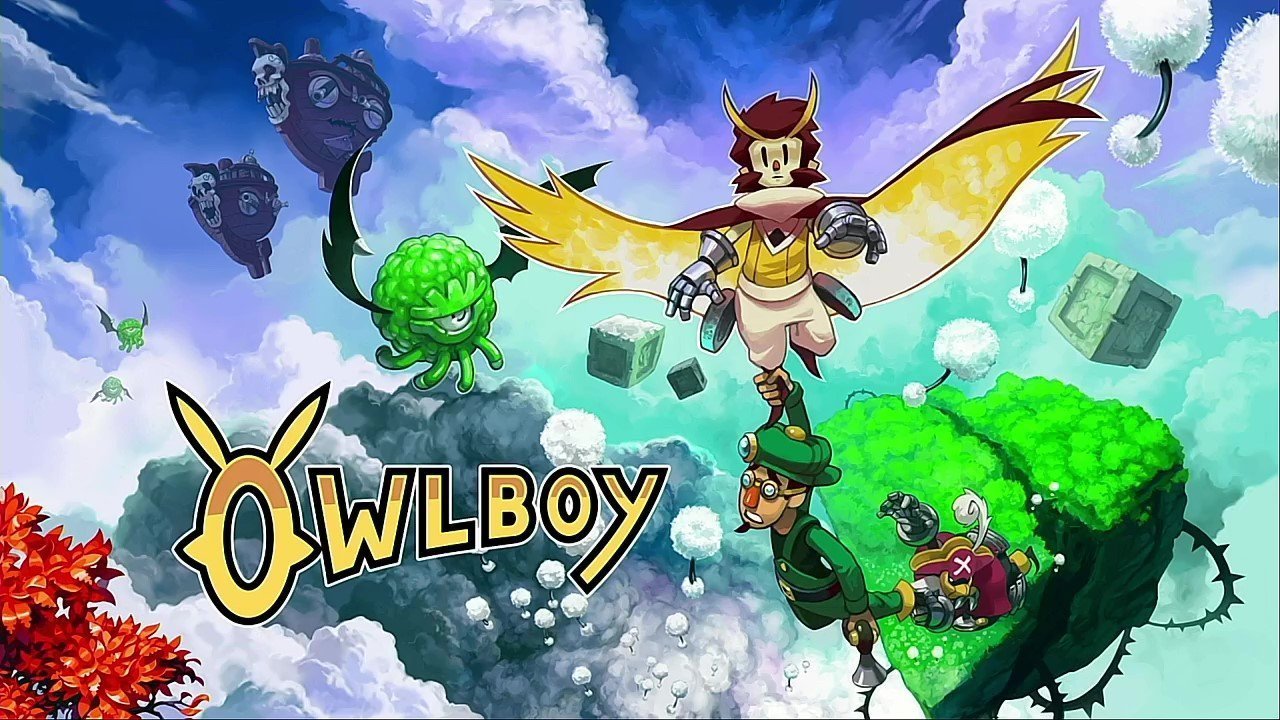 Sometime about 100,000 years ago Owls became all the rage. I joke since owl knickknacks and stories have surged in popularity over the past couple of decades. But they’ve long symbolized intelligence, wisdom, and ability. This is a nice bonus to covering commentary-based analysis because those are common themes in Owlboy too. I tested this game on Nintendo Switch, but it is a cross-platform Metroidvania, an acceptable umbrella term for a whole ton of games out there.

Just a note: this review was written earlier in the life of this blog. I’ve touched it up here and there, but forgive any narrative inconsistencies with the rest of this website! Or don’t, whichever.

It was released in 2016, and again in 2018 for Switch. So not hot off the game press or anything, but it is still a highly regarded game. And rightfully so, there’s almost nothing to compare it to. Platformer/Metroidvania/FLYING?! I don’t think there needs to be much dialogue on a timeline with a game so creative and unique either way. I’d been going through the indie Switch titles on GameFly, and taking advantage of the ability to try out some games I might not otherwise. This is one I found. I’m so glad.

Please Direct Your Attention Up Front to the Owlboy

So, I checked the mail and popped the Owlboy card into my Switch. I wondered how well I’d be able to handle such an esteemed game and at the time my novice skills for playing such an open world environment, let alone, as it were, a quasi-Metroidvania, in the likes of well… nothing before it.

Owlboy addresses a narrative very heavily in a way that is very sincere in its themes of coming-of-age, right and wrong, friendship, a disability Within this there is also the metaphor of learning to spread your wings for some genuine animal metaphor intensity for you.

Owlboy is indeed somewhat intense. A lot of games could have you chuckling at the whim of an old professor making wisecracks, or some sarcastic best wishes as a helicopter flies away. It certainly has plenty of lighthearted fun, but prepare for angst or feelings, what have you, in this strict intro.

“Otus,” is a mute owl boy who is learning to take flight. His elders and neighbors are often jerks who give him a hard time, but some of them are prompt in offering him friendship, so the meatheads around him kind of fade into the background.

The wise lessons of Owlboy are about acquiring wisdom by trial, or at least the lingering aspect of it, so don’t fret the immediate gameplay for its heavy atmosphere. Being able to fly helps things a lot.

While flying around the floating habitat for the creatures in his community, Otus makes a friend named Geddy. He’s not an owl, but not everyone is. The species of the characters in Owlboy are actually are not even all birds.

Geddy, who mostly looks like a mustacheless Luigi, maintains a defense post in the habitat, village, wherever they are in the sky. He’s also a good shot when you carry him around with your wings and barrage enemies. Geddy and Otus take down a couple of cowardly bullies and soon meet another bird named Solus who has a nervous disposition.

Everything seems to be going pretty well at this point. And before you know it, the first boss is encountered. He’s called “The Troublemaker” and he looks kind of like a scarecrow. He’ll lead you on a chase to keep you on your toes, so keep watch.

Unfortunately, The Troublemaker was not the most difficult creature to take down in my first chunk of gameplay. Actually, those bumpy green ball things on the ceiling in his cave were really annoying. For the purpose of maintaining the nature of this review, I stopped there. It was enough to really see what the game was like and what kind of things might be in store.

With a little practice and instruction, it shouldn’t be too hard for you. When it comes to wall-matched blobs that take a third of your health, the best thing for me to do is probably just work on timing. I didn’t run out of lives once, I don’t think there are any.

If you were looking for an indie pixel art adventure with excellent aesthetics, an old-school modern relevance, and the kind of storytelling which built a genre, here ya go. A simple addendum, apparently this game was in development starting in 2007. Holey Moley! Please acknowledge the attention to detail put into this game, it’s quite sophisticated, and it’s a special category of game that’s truly remarkable.

Thanks for Reading About Owlboy

So, that should be enough to give you the scoop if you want to play this game. Yeah, actually for a premium indie game that has a lot of creative labor put into it. It would be good as a game to add to the casual shuffle of your gameplay. There’s enough motive to fully complete it too, so give this one a look, you might like what you find.

Thanks for reading my impressions. If you want to read about more games find more here at MrDavePizza.com. I’m also on social media, with links at the top.

Haven Park: The Park Takes Care of You

The Last Campfire: A Spark Hiding in the Darkness