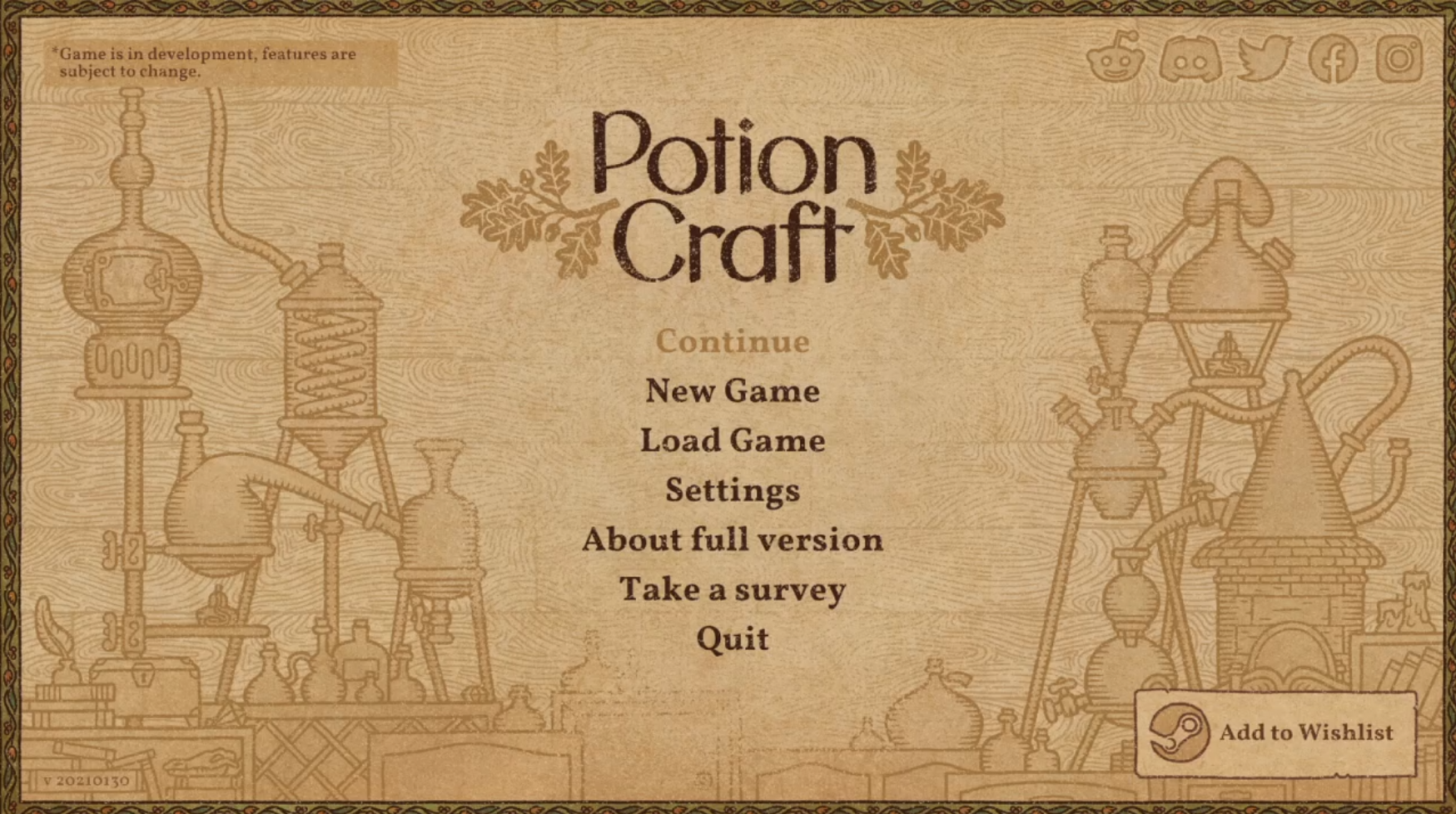 Note, this is a review of a demo, not a full game, but it is in a very sophisticated stage of development, so I decided to go for it. Check back later after the release! The idea is you are an alchemist, your regular fantasy world potion maker basically. Without too much ado, you take over an old wizard’s house and are tasked to turn it into a flourishing potion shop. Everything involves active interaction with objects to create, discover, and learn new potions.

This game kind of reminds me of Good Pizza, Great Pizza, only medieval with healing potions and mythical lands, developed on a sturdy scroll of parchment left in the clay pot in the corner. These trade-style games are starting to really entertain me, and I’d love to take credit for that for loving them before it was cool, but the gamer masses and developers have figured out for themselves that these games are cooler than cool. Or is that ice hot? It’s nice to take some time off from laying down the law with a legendary sword sometimes. At least for me, it is.

The Basic Elements of Potion Craft

The tutorial is short but will get you going. That is, how to blend herbs in your mortar and pestle, stir them in your cauldron, and fan the flames with a fire blower to discover new potions. There’s actually a lot more to it than that, but you will eventually start to make your own discoveries when customers in your shop start to ask you for potions you don’t have.

I spent copious amounts of time learning alchemy in WoW, and this is pretty similar to how the herb collecting and recipe brewing work, but this is a lot more casual and interactive at the same time. I love trading games, and this one speaks to my heart. Oh, did I mention it is gorgeous? You probably noticed.

I’m not 100% sure how the haggling system works, but remember, this is a demo! It’s a realistic feature for such a concept, isn’t it? I noticed a couple of times I turned people away and the next person in line was grateful that I didn’t act recklessly with my trade. After all, I’m a distinguished member of the community now. I’ve got a business to run.

As I was saying, there’s a bit more to it. It’s one thing to have lots of ingredients, which you will–there is a garden in the back and regular ingredient vendors. You will need to travel through the hidden edges of your map, which resides as wallpaper in your lab, to set paths through the wilderness and wind your way to hidden areas that will broaden the depths of your recipe book. With your lab equipment!

It probably sounds kind of convoluted, but it’s SO fun. I love solving puzzles that give me a fair chance. It is such a unique mechanic too. Navigating a treasure map with herbs? I flipping love that! In a moment of relevance, it’s, in my opinion, exactly how an alchemist would solve this problem!

If it does confuse you, I recommend just flipping around a gameplay video on YouTube, or in a much simpler explanation, just move around the map by seeing which herbs change the dashed path of the map behind of the lab when you select different herbs. If it goes the direction you intend then grind the herb and throw it in the cauldron–stir to move. You can try different herbs to navigate as you go further. I can’t believe somebody came up with this on their own, I mean this is brilliant stuff.

Learn what the buttons do, save recipes, and use your imagination. Potion Craft has a lot of great ideas. So, what exactly does this have in store? Uniqueness for once. I tried another game that had been abandoned with this concept and I was really excited, but it just kind of slipped off the edge of the world. Paying attention now? Just kidding. But anyway, when you lovingly create something you give it the tools to survive on its own. This could go to the console, mobile, or wherever. It might also inspire.

I’ve learned something which surprised me since I started MrDavePizza. There are others out there who want to play the same type of games that I want to play, and they’re making them. And yet, I insist, there is not a shortage of fantasy mechanics, just the games to play them. You could enchant, inscription, or charm. Lots of options. You could even explain the entire foundations of the mystic hermetic arts through the medium of gameplay.

Okay, that’s getting a little too serious, but I have been seeing some very interesting stuff lately. Maybe you have too. This is a game in which the developer is giving everything to. Maybe there’s something to learn. I love seeing that gamers are making masterpieces in their spare time. Anyway, it’s a really cool title that’s going places. It has the right components to enchant.

This game is totally free in the demo right now. Even so, I was able to spend over an hour just learning how it works and getting a feel for the gameplay. I’m pretty sure I could have gone even further, were it not my intention to share this game.

My only hope, and it is one out of appreciation instead of some sort of entitlement, is for there to be massive potion recipes. which there already are really. If this were released with the possibility of a DLC, I’d transmute some lead into gold and buy it. Nice play Games, the developer has a steady following, but if you like what you see there, make sure to check them out. http://niceplay-games.com/

Oh, did I mention it is gorgeous? You probably noticed. This one blew me away, make sure to check it out if you enjoy this genre.

Thanks for reading. If you want to see more reviews just head to MrDavePizza.com.