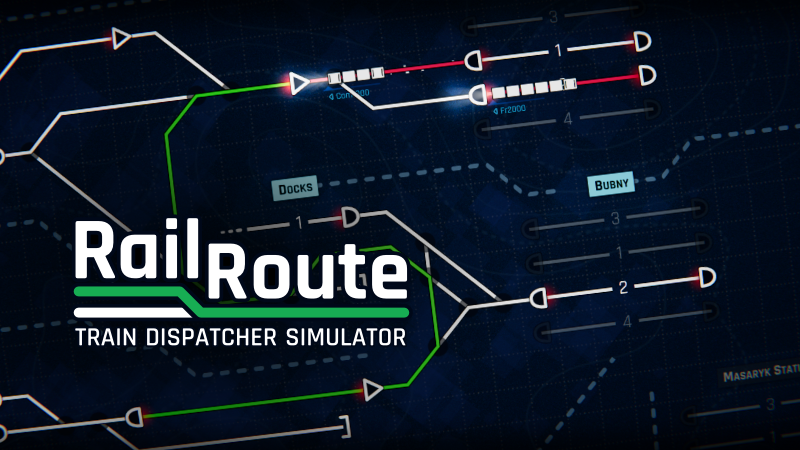 Rail Route is a railroad dispatch strategy game for PC. Trains that travel between stations, railyards, and tracks do so at the discretion of railroad dispatchers. They use special display maps to direct traffic. This game takes most of the nuances of this real technology and has created a simulation.

It uses simple mechanics to build a railroad empire. With many options, an informative tutorial, and room to expand, you’ll be keeping an eye on your fleet timetables for engaging gameplay.

Hey, Dave Pizza here. I was sort of surprised when I saw this game pop up on my Steam client. Not only is this game about something with which I actually have some real experience.

Alright, so, I mentioned that I have a background in this game topic!? Yes. As a matter of fact, one of my hobbies for years has been radio monitoring. I have listened to a variety of utility services from public safety to global aviation. One band I have relevantly been interested though is the rail band. At approximately 160-161 MHz, pretty much anybody can listen to the railroad traffic in their area.

The rail band is usually fairly interesting, however, it can be incredibly confusing. This is why some railfans use a program to monitor something called ATCS. ATSC is a dispatch map display that shows you what track sections in a local network are in use, which ones are slated to be used soon, and the direction of the switches as they are aligned amongst the track. It is not a universal or even accurate option, but it can tell you if a train’s about to go by your house sometimes.

Honestly, I haven’t listened to rail band is probably a year, not because I’m bored of it, but I haven’t been able to get out and see a train in about that long. I love trains though. Really. I have been on around 10 major long-distance routes in the US and Canada. I like watching videos of trains. And whenever I get a chance to see one up close I always bust open the camera. Also, I used to live across the street from a rail crossing and I loved sitting on the porch to watch them go by.

Alright, so there’s that nostalgic trip. I really need to tell you about this game though. It seems that most of Rail Route is complete, although it is in early access on Steam currently (although a free demo!) Its interface may seem confusing, but after a brief tutorial, you’ll be able to figure out the rest quickly. Basically, just keep your trains running and save contract payments to build more and bigger networks.

You can manually adjust the rail switches to re-route trains, and open up tracks plus call new ones into the station. There are options to purchase expansions after you’ve been running your trains for a while. It’s not a clicker, but I bet you could leave it open on a second monitor. The main mode in this game is “endless” after all, so there’s plenty of content.

I think the main thing to acknowledge at this point, without jumping straight into the major themes of this concept, is that this is a pretty neat glimpse of what this game is going to be. If you are into trains or railfanning, you’ll probably think this is kind of cool. I think a lot of gamers really like this minimalist interface also. This is what it looks like for the real thing as I mentioned in discussing ATSC, so I think that is a pretty nice aspect. The simple glow of a string of crawling rectangles on a dark blue background is pretty satisfying for me.

If you try this demo and like what you see, the best way to support it is by wish listing it on Steam. It is set for release in June of 2021, so you may be hearing more about it soon.

Thank you so much for reading MrDavePizza.com. I update very regularly, so be sure to check back soon. And if you like what you see here, take a look around and read as much as you like!

Fugl is a VERY Colorful Little Indie That I Played REVIEWJuly 8, 2021
Cosmo's Quickstop is That Out of this World Co-Op REVIEWFebruary 23, 2021
Subscribe
Login
0 Comments
Inline Feedbacks
View all comments