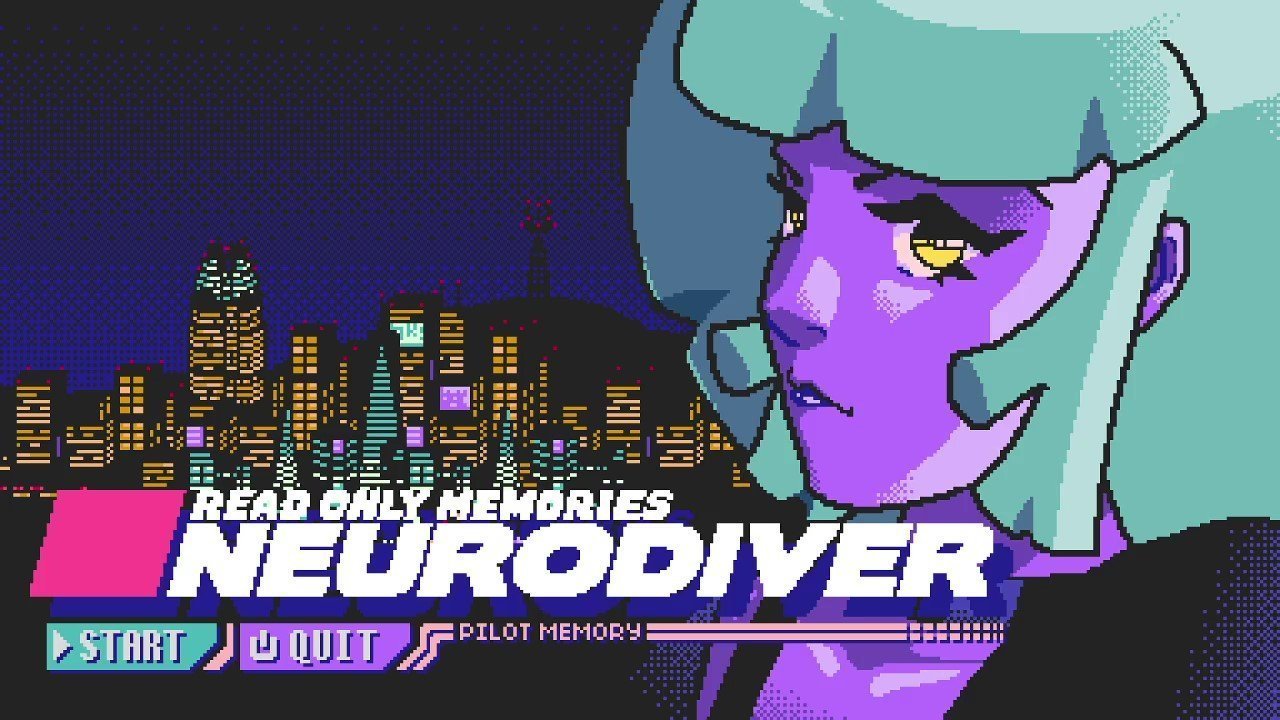 Read Only Memories: NEURODIVER is an indie interactive fiction visual novel project. Play as ES88 a psychic therapist who recovers lost memories for clients using the help of an organic “neurodiver.”

You’ll start as a hybrid client named Crow. Crow has a mysterious background but is trying to restore a memory that has been tampered with to recover a memory chip at the center of a secretive trade he took part in. The art direction in reading Only Memories is colorful and fresh.

The subject of memory is always a potent one, and the way it translates into media is variable and unpredictable. I recently wrote a review of another game demo of this nature called Don’t Forget Me, which, while similar, manages to tell very much a similar thing without encroaching on the interpretation of the other at all. Actually, they’re quite different and are occupying diametric perspectives as I write this review.

Read Only Memories and Remembering Memory?

Memory is an intangible mind-matter that dedicates itself to preserving the structure of things that have been experienced before. I’m less into psychological cosmology or theoretical explanations than I used to be.

As an adult, the naturalistic approach is the one that suits me personally. I really want what I say in these reviews to have a meaning beyond jump, jump, click, and synopsis. So, I apologize in advance for the expunging of neutral brain matter to explore the dynamics of these games about memory.

In my last review for Don’t Forget Me, I mentioned a book called The Lathe of Heaven by Ursula K. LeGuin. It’s a story I understand the concepts of and can probably recommend, but I have not spent a radical amount of time thinking about, or even really acquiring, to be honest with you. Sorry. If this concept suddenly sparks your interest for some reason, however, twentieth-century science fiction is the way to go.

For the rest of us, “Forget it, Jake. It’s Chinatown.”

Step Into My Brain Worm Office in Read Only Memories

I have to share a weird anecdote for the sanctity of this review. I looked at some old photographs today and I paired that up with some current coffee daydreams floating around in my head. Memories are fragile stuff. What if somebody tampered with your memory though? I’m not trying to delve into your mind, but have you ever felt that way? What if what we remember isn’t the thing we remember it as.

In Read Only Memories, your attempt to recover a memory is based on the interactional transactions you make with your acquaintances and the people that exist in their memories.

So, start off, minding your business, and a friend stops by. Next, this guy Crow shows up, he’s half-dog/half-human–I think–formerly human. It’s cyberpunk everybody, it’s got a little Cloud Atlas setting and Phillip K. Dick axioms. Crow has had his memory tampered with.

So, this neurodiver thing is some sort of biological psychic hand-thing that latches onto a client and goes to town.

The first mission, actually the only mission, since this is a demo, takes you to a “retro” previous-century bar with low-lit dartboards, and anachronistic drink menus. There’s a group of three humans, named after birds: “Sparrow,” “Owl,” and “Hawk.” And of course, you’re “Crow.” Or at least you’re in his memories from the comfort of your facility. These guys, all kinds of familiar character types are very assertive, especially Hawk who seems really grumpy for whatever reason.

It’s easy enough to figure out the inventory and drag-and-drop repair dialogue on the bartender. You get the drinks, swap for the chip, and you’re suddenly headed to the back for a punk character known as what’s called an “esper.”

That’s what you are basically, as ES88, an esper, or psychic. Only none of what’s happening is actually happening, it’s a hologram if you will. He scrambles your memories and you return to the lab. That’s basically the end of the demo. Bet you didn’t expect me to drop the mic there, but that’s how it was!

You’re the Best, Around!

A few major strengths of this game. Art! Everything is pixel art, 32-bit maybe? I do not recall the benchmark for pixel art if there even is such a thing. It really looks nice, and that is as much due to the form as it is the wonderful color selections for everything in the game.

Second story. It’s got the right stuff. A passion, a dilemma, a quest. I’d say full steam ahead if the goal here is to tell a story about espers and retrieving mysteries from the depths of whatever this cyber mercenary subplot is.

Third, it’s totally unique. Yeah, I know I said there are other cyberpunk themes and stories with this theme, but it is not trying to rehash any old clichés or sell out at the first opportunity. The only counterargument I would see to this is that the characters at the bar named after birds look like Gwyneth Paltrow, Neil De Grasse Tyson, and Lupin the Third. And I love that.

It’s a work of love.

If you want to try this game you can find it on Steam, easily, I shall supply the link. It’s certainly neat from a niche perspective to see where this is going. Pixel art is just fun, and I don’t know how many pixel-art visual novels there are out there, but it would be alright if there were more.

I appreciate you reading MrDavePizza. I will have several game reviews down the line and stuff is just starting to get interesting here. So stay tuned, and have a look around!