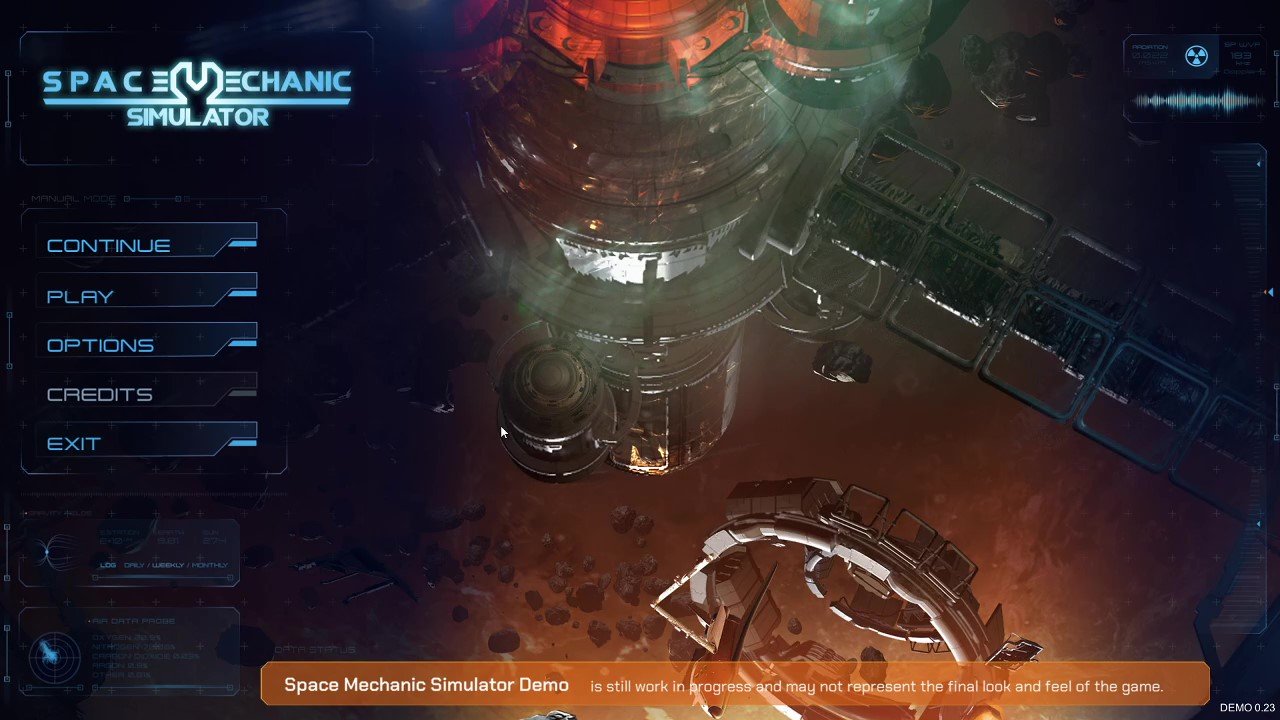 Let’s talk about an upcoming space game! Space Mechanic Simulator is a 3D space-sim in outer space. So far, this game is still in development, but that may have changed by the time you read this. It is currently in development with a demo on steam that I am reviewing here. Your job is to repair space stations, spaceships, and presumably other space vehicles with a sophisticated drill and a meter. Obtain parts from drones or 3D print them. Once you have detected the malfunctioning equipment, remove it and replace it with a new part.

This is going to be more of a showcase. I have trouble coming up with things to say sometimes about games that are realistic or puzzle-based. There is something to be said here though. And as a getting-my-feet-wet armchair astronaut, I smiled when I saw this listed on Steam. Because a lot of space games are action-packed, storytelling experiences that are sometimes what I want to sink my teeth into. But this game engages in a different way than that. This is more engaging in the logic-based deduction way. And it definitely drives the story well enough for me. The narrator is full of terrible puns to enhance your humor circuits though!

I wasn’t sure if I was going to write about this at first, because I got kind of confused at first by trying to rush through it. But I thought maybe it wasn’t finished. If you’re at that stage, just watch my video. I solve the first puzzle in the demo with ease after I paid attention to the tutorial.

The control keys flashed out of view too quickly in the demo for me, but by quickly pushing esc they’re pulled up.

The idea is to detach the panels, press 3 for the meter, and mouse over parts to see if any are damaged. Then just unbolt layers of parts until you get access to the right one to pull it out.

I really liked this preview of Space Mechanic Simulator. You may have seen me mention before that watching EVA spacewalk videos give me vertigo. I don’t really know what the real thing is like. I’ve watched a few recently though, and it’s actually very interesting. In real life at the ISS, there are, for each task, selections of tools used, just like working on any machine; including drills, wrenches, and sealants. I recently learned that on the International Space Station, they even have a 3D printer for making tools. How rad is that? Considering the nearest hardware stores are on the surface of the Earth, that is probably pretty convenient. That feature is in this game. Realism points!

This is a really approachable sim. The developer has created other mechanic sims, which is an increasingly popular genre, so they seem to know what they’re doing. The demo is very limited just by the nature of being a demo, but the storefront for the game boasts future repair jobs that are much more complicated involving over 100 part selections.

As far as my space game reviews go so far, this is the one I think will appeal to dedicated fans of the genre the most. With the EVA thrust controls and time-sensitive repair jobs, it captures the vibe of a real EVA–in a sort of relaxing way.

Thank you so much for reading MrDavePizza.com. I am currently writing a lot about indie space games, but I play all sorts of games. So feel free to look around the site, and read as much as you like, it’s free!