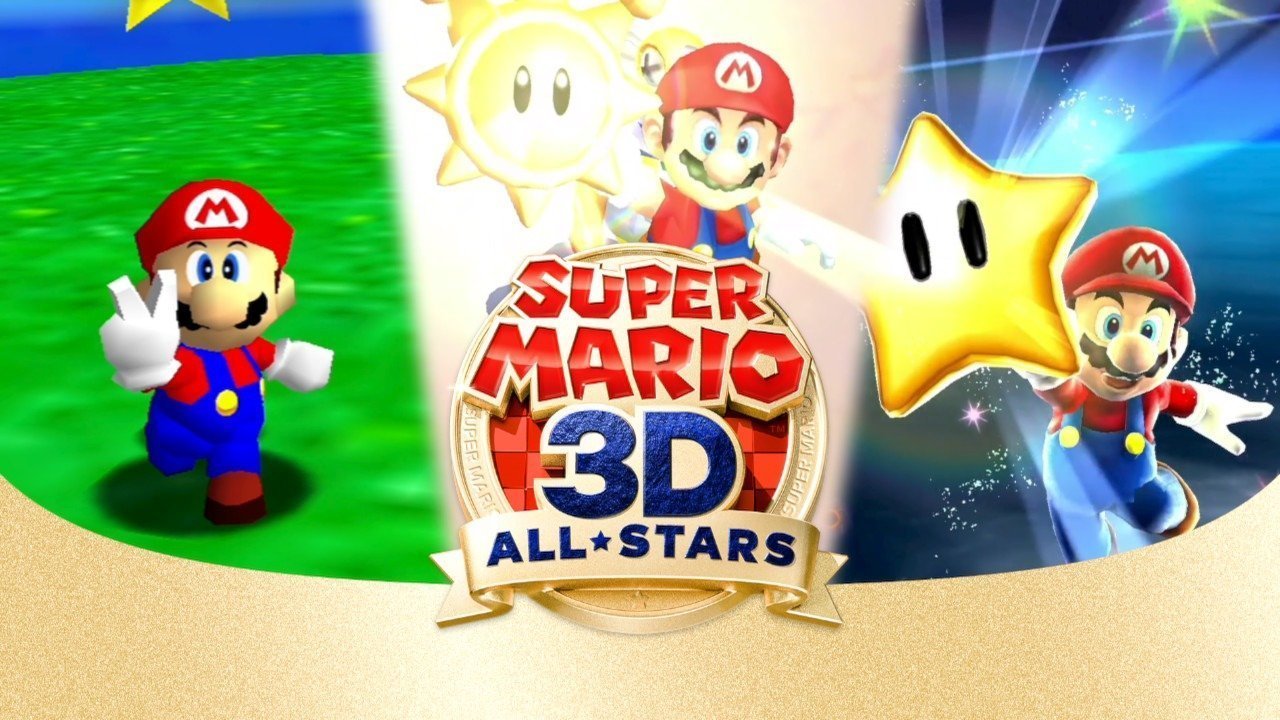 This is my best–and one and only–article about Super Mario. Indie games, step aside for a moment. Super Mario 3D All-Stars for all parties interested, is a special release from Nintendo this year for the Switch which contains three classic Mario games spruced up for HD and available for a limited time offer in physical as well as digital form. They’re serious about the limited time too, which has some scratching their heads but it is what it is. I don’t sign on as Dave Ubercollector Pizza instead of Dave Pizza, but I believe this is what is called a chase. Or something.

So, the games are Super Mario 64 from Nintendo 64, Super Mario Sunshine from the Nintendo GameCube, and Super Mario Galaxy from the Nintendo Wii. A really solid list there. I was most excited about ‘Sunshine because it was the one game that had never been retro-released for any console, so it is basically a totally new Mario game for me.

Before I digress, however, there are still two other games! The titles are ordered chronologically in the collection menu and title screen itself, so I started with Super Mario 64.

I remember the first time I’d ever seen this game played on the 64. It evoked a feeling that actualized what I’d learned from pop culture and reading science magazines since I could. It was that of the future of technology. What was I to know about this world of an interactive Mario game where the dimensions of the world were some sort of Claymation cyberspace magic that sent my endorphins flooding my brain like a rollercoaster that went upside and catapulted into a rippling painting that was actually a portal to another dimension.

I’m sorry if that sounds a bit hilarious, but it was for real what it was like. And then when my brother found the metallic Mario later in the game, I was ready for my sim stim visor and personal warp speed U.S.S. Enterprise. 10-11 years old? I can’t remember.

Anyway, so, I was a little worried when I saw the preview for 3D All-Stars that the Switch version was going to be a mere copy-and-paste job. Thankfully, while the game very much holds onto the legacy graphics of the original version, it’s kind of clean up in a way that makes them seem refined somehow. That’s kind of how I feel about all three games in the collection which I also tried. I’ll just say it here, in addition to this in its own way, Mario Galaxy AND Sunshine look flippin’ beautiful in this rendition.

I really didn’t go too far in 64 because I am still waiting to prepare to take it seriously outside this review so that I can understand. The game also made me remember that I probably spent 300 hours just walking around and looking at stuff back when we had the game as kids. It’s a nice way to enjoy a game if you just want to take your time.

I did make it far enough to challenge the King Bob-Bomb boss in the first level, but I had to move on because I clearly haven’t grasped the controls and gameplay of the old classic as it is now intended in the Switch form. P.S. They just announced today that the GameCube controller is now compatible with this game if you get the Switch adapter and controller to hook up to it. Sweet!

I don’t know if I’ll ever really be able to appreciate this game until I get the aforementioned GameCube controller for Switch, but I do know, from videos I’ve watched, that it is just as much a prize Mario title as any of the others. For some reason, this game was not retro-released through two consoles, the Wii and Wii U, until this collection which I am reviewing. It might have had something to do with the controls or the Wii U catalog semi-short run. It seemed strange that it had seemingly been forgotten though.

I have to say, I do like this game. I also have to say, holy bajoles this game is not easy. I managed to complete the first level weeks ago when I first tried it, but it was so challenging I needed a break. And honestly, I really don’t have much to say about it after this review either because it is so unclear what you’re supposed to do that I just gave up.

I tried for half an hour to figure out what I was supposed to do after painstakingly combining tight rope walking with my water jet pack (core game ability) and then double jumping. I managed across the lake in level 2 and then I talked to this big jelly dude and stopped, because there was literally nowhere else to go, okay I don’t know. There’s something to do with paint too. WHATEVA

As far as 64 and Sunshine go, I guess my advice is to be ready to take them seriously. They may be older games but they make Odyssey look easy. Okay, I’m not good at that one either. Anyway, if you take your time and use walkthroughs and control guides like we all did before gaming became so intuitive, you can have fun with them. I might do the same.

I thought the game I was going to be most excited about would be Sunshine, but it turned out to be Super Mario Galaxy. I played this game on Wii and backward-compatible HD on my Wii U a little while ago. It really shines in this collection. I’m going to truncate this substantially because all I really have to say is that this version is awesome!

The toads running around screaming at the beginning are hilarious as Toads usually are. (BTW, I want more Toad games, ya hear me!) Gosh, the graphics look so darn good on the Switch though, ‘specially with a Marseilles cable, which is just something I use in my personal gaming toolbox. The game actually turns the pro controller into a motion-sensitive remote just like the Wii controller. I haven’t seen any other games do this I don’t think, but oh my gosh it is incredible. You shake the controller to spin jump, I didn’t even know this was possible!

I wouldn’t mind playing more Wii games on Switch if they had the justice to gameplay All Stars had. With everything moving along just fine with my Switch Pro Controller as if it was a new game, why wouldn’t I play these more? Anyway, after all, is said here, I just want to say that these games might take some time, but they are pieces of art. I don’t know why they’re temporary, but if you can pocket it I’d definitely grab these up before they’re gone, which I don’t really think will happen honestly, at least not permanently, but once you acquire the game they are yours forever even on digital which can be redownloaded after the temporary availability ends on March 31st, 2021.

Just a little bonus. If you were a kid in the 90s you might have known something about a little game called Super Mario All-Stars for the Super Nintendo. When the SNES overtook the NES’s reign, this game was pretty cool because you could play all the old NES Mario games with SNES graphics on the SNES. It’s a nice game to have because it has all the classics with updated 16-bit art on every part of the game. The games are Super Mario Bros., Super Mario Bros. 2, Super Mario Bros. 3., and “Lost Tales,” but I don’t remember much about that one except it had a poisonous purple mushroom, bummer. Here are some screenshots, have a nice day.

Power Rangers Battle for the Grid is a Morphin' Good Time REVIEWMay 26, 2021
The Sims 4 is Still The Best Substitute for Reality REVIEWNovember 23, 2020
Subscribe
Login
0 Comments
Inline Feedbacks
View all comments