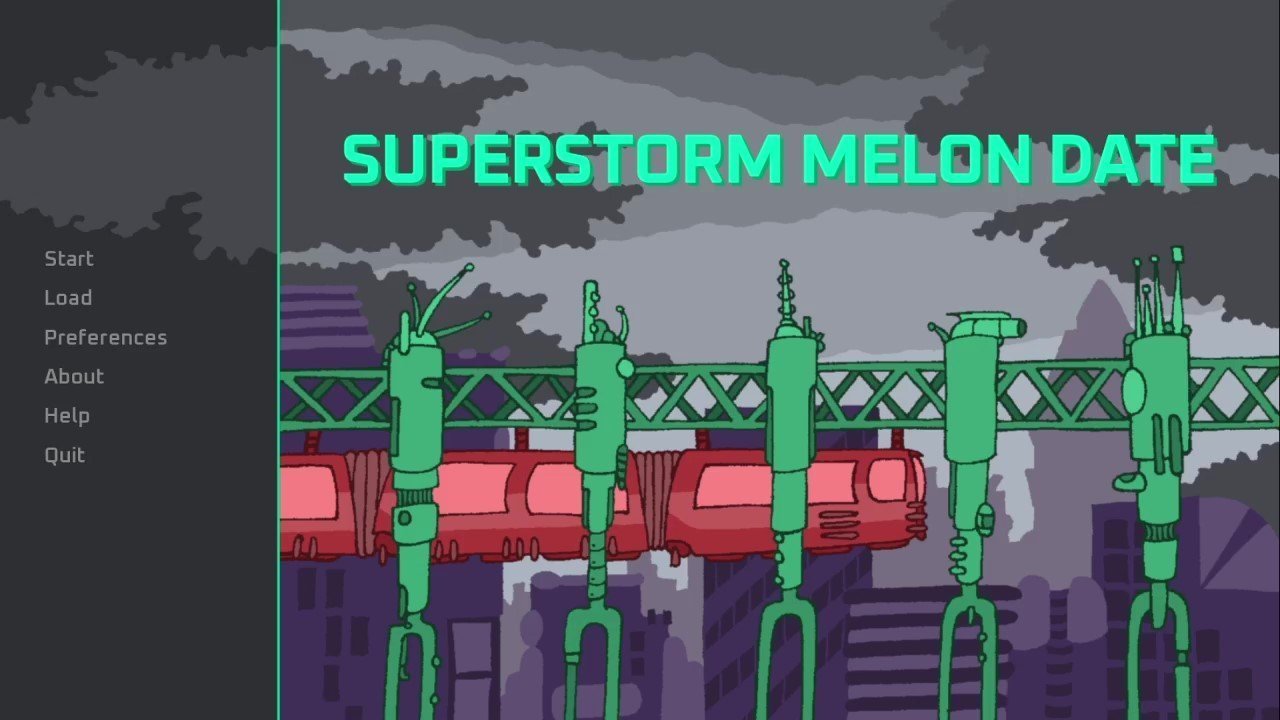 Superstorm Melon Date is a visual novel that takes place in a relatively near dystopic future. People live in shelters and return to the surface only periodically because climate change has plagued the earth with frequent superstorms that burden humanity. People have developed widespread allergies and only the rich can raise fully human children.

Therefore, a hybrid species of half-melon people have outnumbered humans because they have better immune systems. To tie it all together, the plot of the game is about you going on a date with a melon person listed on an internet dating website. A melon person named, Mel.

Every once in a while I see something in my game scouting that causes me to be totally horrified yet intrigued. Superstorm Melon Date is one of those games. It is probably one of the weirdest flippin’ games I’ve ever seen, but I’m going to tell you why it’s also really quite good and really endearing actually. It’s a work of art.

Where the Melons Grow

Right. So, yeah, this is hilariously weird. I am not sure what the motivation is, although I have taken a look at the developer’s Twitter. It seems people like to poke fun, but allegorically and metaphorically it’s an interesting representation of identity in our contemporary world. Gender and orientation are welcome here, but also species. Wolves and rabbits? Try fruit!

The first time I saw this game I thought it was about zombies. Mel is green like a watermelon, or I guess a melon it would seem. I’m going to describe Mel as she/her. Most visual novels these days don’t imply gender, same as this one, but I didn’t even think about that until halfway through the game, so I’m alright with it.

Technically this game is a dating sim. Actually not even technically, it is completely a dating game. Generally, I’m not into dating sims, although I have played a few good ones. Actually, I don’t even really care about dating at all. I spend a lot of time looking for visual novels or interactive fiction that are more focused on mystery and adventure. Still working out this interest, but it’s important to try things. I was scared to try this one because of the dating sim aspect, but I really liked that aspect this time.

Inside Superstorm Melon Date, It’s About What’s Inside

In Superstorm Melon Date, a lot of the interaction revolves around accepting Mel, the melon person you go on a date with, for their genuine personality and not just the fact their skin looks like a freaking watermelon–no, the fact that she IS a watermelon.

I’m not even really sure how this would be scientifically possible, but that’s kind of the joy in it all. It’s sort of brilliant because it’s so silly that you can feel however you want about it. I personally would not wish upon humanity a melon uprising, but who am I to ask? I’ve been into that ent and triffids stuff for ages.

Just a tad more background. The story starts off at the end of an extensive superstorm, they last months, and you’re on a dating site. You’re a little wary of dating a melon person, or “melo” as they’re mostly referred to, but it seems like it might be a good option. So, you meet up for the date.

Mel has pulpy pink and red eyes, gummy pink bumps for teeth, and shriveled lips. Hottie alert! Man… But she’s dressed in a kind of a bohemian fashion with her handmade clothes, and sincere smile-so I thought, alright why not?

As it turns out, appearance really isn’t everything, because Mel is hilarious and fun. The game is almost totally her describing herself. She’s been playing the dating field and having fun for ages, but she might want something more serious. She is always taking dares to a comedic level, like confronting the staring patrons in the restaurant. She’s a lot of fun.

Give it a Go

This game is not really advised for younger audiences. There are some substance use and mature romance themes. They’re not terrible, but I wasn’t quite sure how far those themes would drag out. Everything is actually quite tasteful so long as you are open-minded. Even as a melon person, I think Mel would be a really fun date. Maybe the reason dating sims are so popular is that they have some good ideas for dating. Ah, to be young.

By the way, this game is free. I know it might not be everybody’s automatic choice, but this game is so awesome. It fits my bill of extremely weird without being traumatically weird.

What more can I say about a free 45-minute-long visual novel? I loved it, okay? The art was good, the dialogue was also good. It’s not that long, if you’re feeling like you want to VN-out, this is a good one. Or play it with somebody on a date, that would be perfect.

The Steam link is below. I hope you liked this review. I try to provide actual helpful information in my reminiscing. This one re-inspired my interest in indie gaming today, so check it out.

Thanks for reading MrDavePizza.com Have a look around!