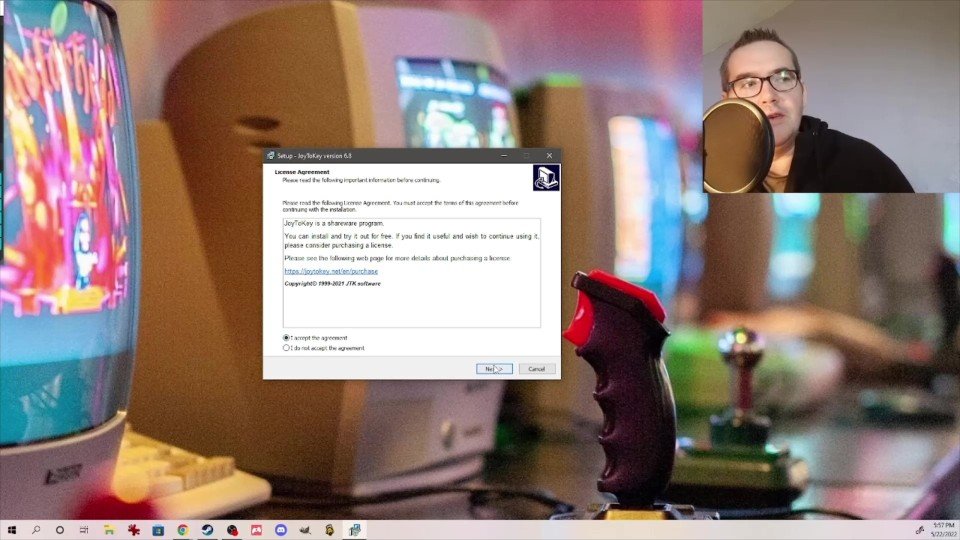 Getting Started with JoyToKey

There are many programs available on the web for binding keys to a controller, but I’ve found JoyToKey to be the easiest, and it is also free. You can purchase a registration key if you wish, but it is not required. The program is classified as shareware, so you are within your right to either use it for free or support the developers with a purchase.

I visited the JoyToKey website today, and my only suggestion about that is to click the right area. This program is safe and free. If you so desire, you can download the game from sites like Softpedia, but I’ll link directly to the JoyToKey download page here to support the developers.

Most keyboard-controlled games will use some variation of the directional keys, left down up, and right, or WASD. This can vary, but not much. Aside from a few variations for action or jumping keys, that usually sums it up. Note, that I do not cover integrating mouse support in this tutorial, but it is also possible using JoyToKey by pressing to highlight and then, configuring the analog stick directions on your controller.

As an example, I configured the keys for a game called Ducksoup Dungeon by developer Richard Lems on ItchIO. I’m using this game because I am familiar with the controls from my review of it. Many browser games on Itch.IO say what keys to use right on the front page. Here the controls are directional, plus the keys D, and F for jumping and combat.

To configure a button, find it on the button list and double-click. A window will come up that says “Assignment for:” etc. This is where you choose your key. So for example, I want the up button on my Xbox One controller to trigger the up arrow key on my keyboard. I enter it into the yellow area.

It might help to play the game with the keyboard first to decide how you want to lay out the keys on your controller.

And look, I’m playing this browser game with my Xbox controller!

If you liked this tutorial please have a look at some of my other gaming tips and tutorials. Thank you for reading MrDavePizza. The recently released pixel platformer Pompom: The Great Space Rescue ran across my desk as a showcase opportunity through my friends at Indie Game Collective. It’s a precision platformer, sort of, with a feature I’ve never seen before this involving time slowing AND improvised platform placement. You can play with a controller, or you can play it with a mouse (or hamster actually, since that is Pompom’s main character you play as.) The game balances innovative gameplay, a moderate learning curve, and generous leniency to keep your gameplay flowing. I’m thoroughly enjoying it, at the level of some other top precision platformers like Celeste. From the pleasant pixel art to the rewarding gameplay, this game earns every slice in the Mr. Dave Pizza pie. So, let me do my duty and share with you some information about this excellent game.

Small note, there was a video to accompany this at one point, but it was my first on-screen appearance and I’d rather forget that haha. The game is still awesome. I suggest heading to the Steam page for screenshots.

What I Like Most in Pompom: The Great Space Rescue and Why

In truth, the reason these games appeal to my creative side is the balance between challenge and personal capability. Pompom is probably a little more on the challenge spectrum, however, the rung of my comfort levels hits a positive note due to the animal character and cheerful music. You might find yourself wondering, in the words of David Byrne, “how did I get here?” over and over throughout the game. The uniqueness of the puzzles aimed at someone who has been gaming for 30 years is humble, even if it made me realize I don’t even have enough time to play. That used to be something that sold me on every game I ever played since I really wanted to just immerse and tune out. But there’s more to Pompom though than an old gamer’s appreciation.

Pompom: The Great Space Rescue demands multi-tasking. It’s like playing a drumkit. Platform there, knock the wall out, account for jump space, and block an incoming barrage. Also, this is important, you never stop moving and all movement is automatic. It’s a bit crazy honestly, although there are difficulty settings that can give you a third bubble (which is sort of like the SMB Wii bubbles) and a long or even extra-long time pause/slow ability. I really only ever made it as far as the third city level, which I almost beat, but tapped out after getting butterflies in my stomach at the last moment. If you ever see somebody like Kevin from Pursuing Pixels play these games though, maybe you are one, it is definitely possible to complete the challenges.

Some General Impressions of Playing Pompom: The Great Space Rescue

So, I guess really it was the art, music, and concept that drew me in most. I’d re-tweeted a trailer for it before playing it thinking it looked cool. And IT IS. But you might find the game more challenging than it looks, which as I’ve said, can be a really good thing. It’s one that may fly under the chart radar but has excellent replayability for the cost if that is a factor. (Yeah, I also got this for free through Indie Game Collective, so heed the slight bias, but it really is a nice quality platformer. And I love platformers.)

Oh, and there is a story. Something to do with pirate cats, which is fun. Think of them as the classic NES/SNES mobs and understand it’s about running the levels.

There’s nothing lacking here, and overall a super fun game. One other last comparison though, if you ever played Scribblenauts, you might see some similarities in the art style, a comparison I’m enthusiastic to make since it is a major reason I ever got into pixel art. If I ever get to reviewing that game, I’ll probably remember this. Notice, I didn’t even mention Captain Bucky O’Hare once before this sentence, but there is a bit of that style in this game too–it was the 90s, and things were awesome.

Yep, so that’s my showcase for Pompom. Pretty interesting game, and one which I may try to get better at. I’d love to try it on Switch too. I have the link to the Steam page below. Thank you so much to the dev, publisher, and IGC for helping me put this together. I would never be fake in a review, but it was so pleasant to admire this one.