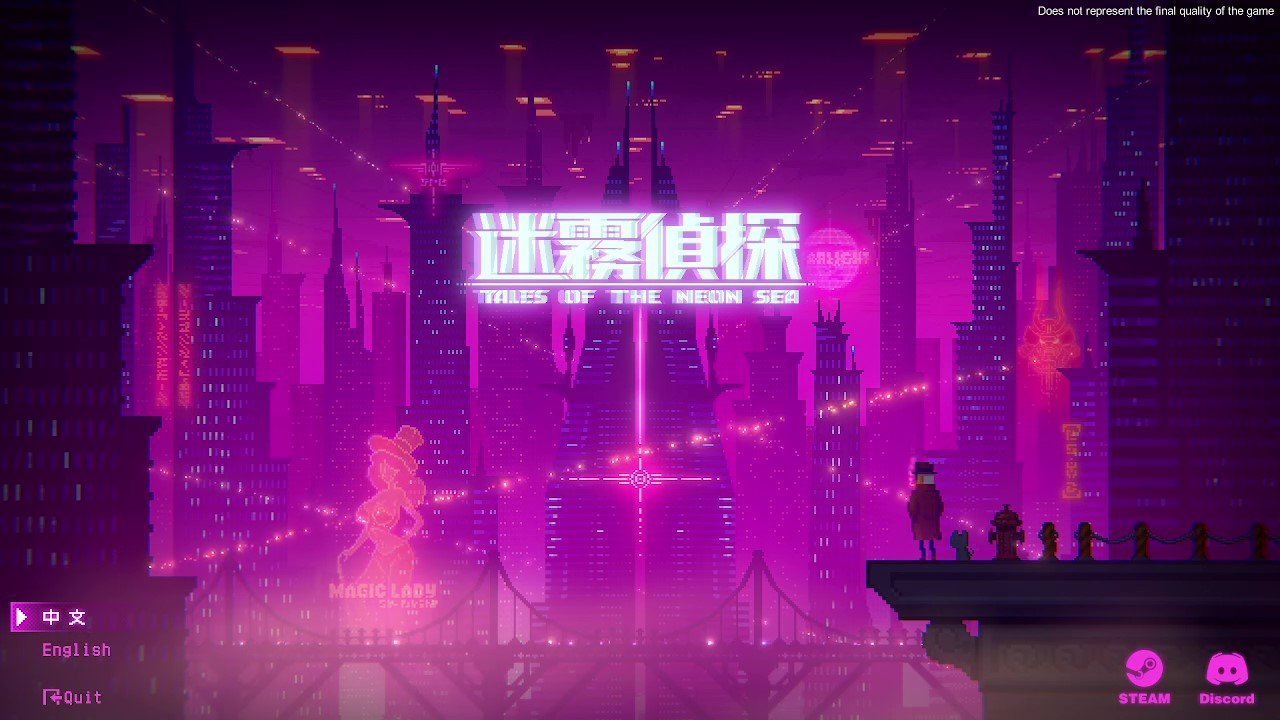 Tales of the Neon Sea is a bright pixel art in the hardboiled cyberpunk detective style. It’s also borderline platformer and adheres to a very high-density environment in synch with some of the best cyberpunk cinematics out there. Explore shadowy laboratories or deep dungeons sewers. This game is not for the light-hearted but it does deliver on content. This is probably the most sophisticated pixel art game I have ever played. Let’s take a look.

Initiation Sequence in the Tales of the Neon Sea

Heads up on a certain aspect. This game is pretty graphic. Your protagonist is a detective so obviously, there are some shady things investigated. If you can stomach that, you’ll be alright. Onward

I am totally stunned by this game. I’m not sure how it’s even possible to incorporate this much detail into a game. The opening scene begins in the large lofty home of Rex, a hardboiled detective. There is a lab in the basement where the first sort of mystery-solving occurs. You live with a robot that’s a cross between BB-8, Johnny 5, and Wall-E. It is not just similar, it’s a deliberate parody! And I loved it. This game has a lot of crosses between humor and fine storytelling. It also has some pretty intriguing puzzles. The first one has to do with an animated robotic suit that’s rumbling in the lab. Collect items to unlock key parts of the puzzle and solve the mystery.

Scene of the Crime

Sometimes I write about games where I really enjoy the game but really dislike one aspect. In this case, I loved pretty much everything, however, there is a major scene involving a murder. You discover the victim in a trash heap and use your environment to preserve any initial evidence. This is pretty early on in the game. It’s a little unnerving for a pixel art game to see this type of content included, yet it’s more stomachable since it’s just pixels and really just a graphic cartoon. It would be unlikely to have a mystery game without at least one casualty. You’ll have to decide for yourself though.

From what I’ve researched, it appears that although the crimes in this game certainly have a dystopic nature, the society depicted is quite peaceful. Screenshots show bustling social areas and trustable dialogue. It’s an ironic detail I found kind of interesting. There are many curve balls here and I implore you not to expect a cliche whodunnit.

In this aspect, it seems that the first crime has a larger contextual meaning in the game. Skipping ahead with the synopsis in Steam, it seems there is a very strong undercurrent of involvement by a syndicate of… cats? Yeah, I don’t know how that became a part of it, but it seems pretty amusing, and apparently, you can even play as the cats. And there’s a semi-mechanical god involved too, but I’m out of my depth on that one. Seems pretty cool from the pictures though!

With all the easter eggs, the massive attention to detail, the beautiful bright neon hues, and artistic illustration, Tales of the Neon Sea is a winner. Most people aren’t quite as sensitive to a general video game crime scene as I am. I know some folks even enjoy that, so whatever, it’s all good. This is a fantastic game. I also know tons of people are constantly on the hunt for cyberpunk pixel art and it’s here folks. Also, crime is one of the top 3 selling book genres, which I am just going to mention for no reason.

As more of an impressions article, this should set the standards for a general info post. If you want to check out more about the game though and investigate any of the trailers, you can certainly visit the Steam page linked below and explore.

In the meantime, I want to thank you for reading MrDavePizza.com. I’ve updated the site a bit here today, so don’t be alarmed if it seems a bit brighter! It’s more about the content these days so I toned it down. Feel free to look around, there’s plenty to see!