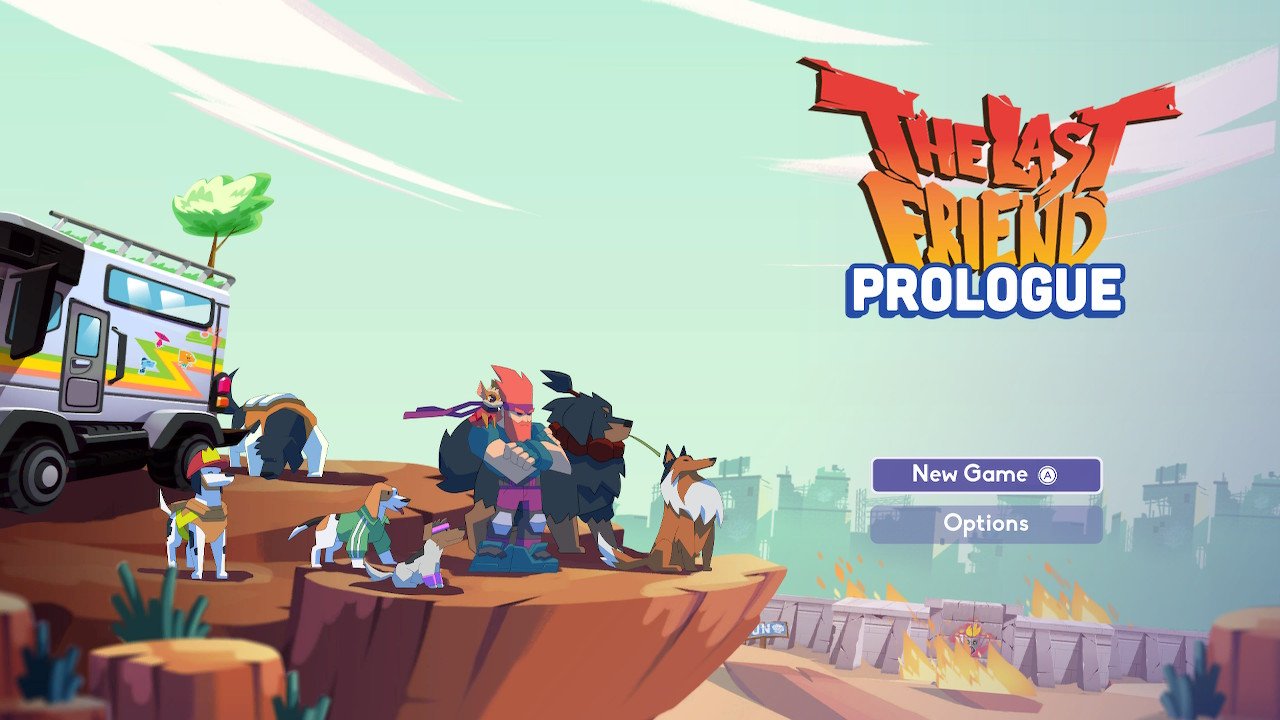 In between monitoring my every action, eShop suggested I check out what demos were out. I had really been looking for them though! So, this game The Last Friend showed up as a demo out. The art looked cool and didn’t seem too derivative of anything course. So, I downloaded it and loaded it up.

The Last Friend is a brawler kind of game with some turret defense mechanics. Most importantly, however, is all your sidekicks are dogs! WHAT. I think this is actually going to be a pretty cool game because of the variety of levels, learning curves, gentle humor, and wonderful dog companion fun. So, let’s do this.

This is not sponsored, I just really wanted to see what this was about.

Doggos and Stuff, Booting up The Last Friend

Stay tuned for one paragraph for my enlightenment.

I have about a ten-minute attention span with any game. I’m not entirely competitive. But I like to see a game giving a good first impression. I’ve been wary in the past of games with too much stuff on the screen. it’s not so bad here though really. Actually, there are quite a few options to customize everything, which is kinda cool–I’m into that. I don’t totally know the intentions of this game, since I’ve never heard of this as a series or anything. Time to look it up:

Okay… I adjust my canter. Well, it IS quite a popular game. Says it was released originally for PC in 2019 by The Stonebot Studios. Yeah, alright, well this is pretty cool then!

Let me give you a rundown of The Last Friend. So, you start off with this RV and a talking chihuahua/cyborg that defends your RV from these kinds of desert mobs and bosses. That’s the first area in the demo, but there are apparently a variety of level types–snow, etc.

It’s pretty much a button-mashing experience, which I do like. Not a whole lot of coordination is necessary, but you’ll want to defend your RV. I don’t know what its purpose is or anything, but after you beat a level, you will make friends with a NEW DOG. Woah. Plus, guess what, when you’re between levels, you can go to a chillout area and talk to the dogs or pet them. It’s pretty amusing.

I Recommend The Last Friend–At Least the Demo!

If you have a switch, just check out this demo before the game releases in January. It’s a great way to see what it is about, and will probably help you decide if you want to buy it.

If you like this review, check out some of the other ones on Mr. Dave Pizza. Thank you so much for taking a moment to check out this review and take care!

Going Under is A Really Colorful, Fun Game But HardSeptember 26, 2020
Potion Craft is the New Alchemy Game That Everyone LovesFebruary 15, 2021
Subscribe
Login
0 Comments
Inline Feedbacks
View all comments