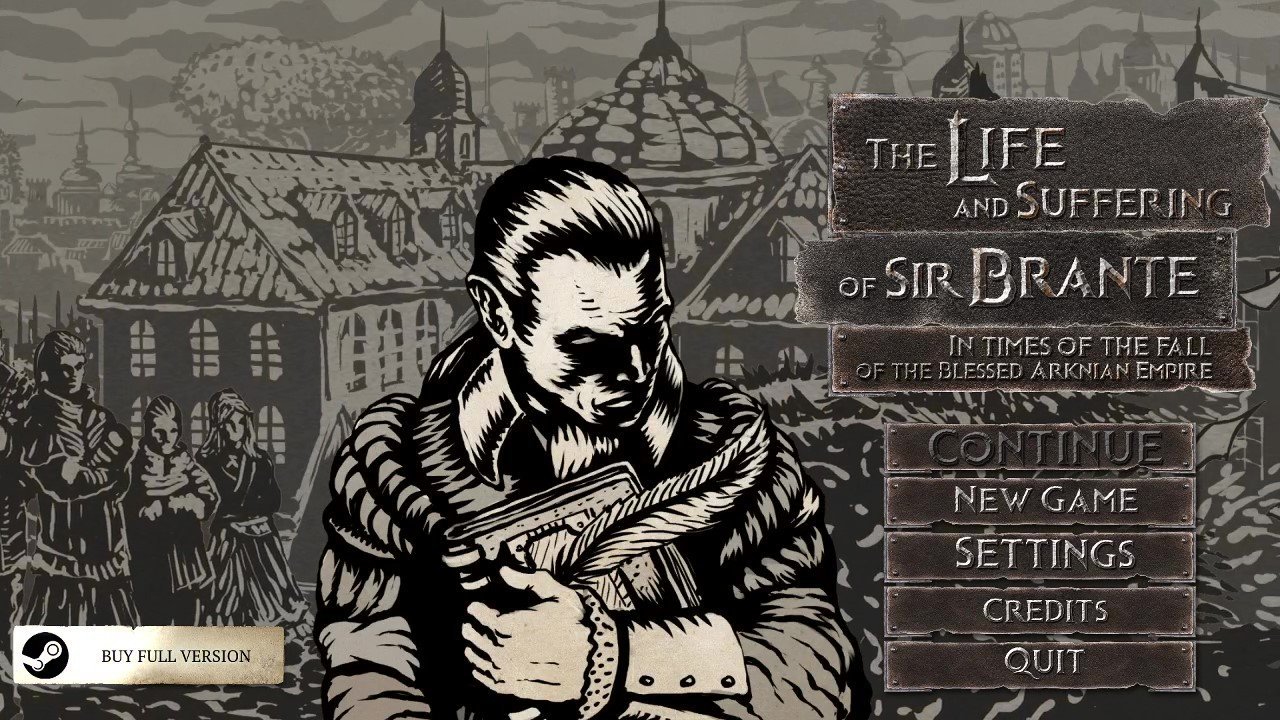 The Life and Suffering of Sir Brante is an interactive visual novel. It spans the lifetime of a character named Sir Brante. Progress through the stages of life starting with childhood.

You will forge deep experiences that will shape the course of your entire life later on. Your actions will affect your own character and also how others interact with you. Try to live true in a world dominated by an esoteric caste system and brutal classism. Yet, starting from the very bottom.

If you’re looking for an experience, not just a game, that will affect you at your core, or one that affected my core, The Life and Suffering of Sir Brante is it. This game might re-open closed wounds from life. It reminded me of my own convictions of life’s tricky path of balancing light and dark. It also addresses our own socio-economic realities in a compelling allegory.

An Introduction to The Life and Suffering of Sir Brante Household

I really had to try this game. I was browsing visual novels, a new personal favorite genre, when I stumbled upon its reviews page on Steam. People are going bonkers over this game, awe-struck, moved, strangers on the internet expressing this game’s impact. After playing the first chapter over the course of an hour and a half in a two-chapter demo, I can attest that this game is deep.

The game is somewhat simple in its interface. You progress through a book about your life through which you make choices of responses scene by scene. Moments in this story are all illustrated, succinctly yet adequately. The illustrations are as though in a vintage/antique book might have–with some special effects here and there. Your choices, initially, are guided by an introduction to the stat system intertwined with interpersonal choices in the book, probably one of the few RPG game elements in the story.

You can focus on what elements might be important to you, what aspects of your personality you want to hone, and how you want others to think of you. And trust me, you will have an opinion.

There are many very quite beautiful moments in this game, even from the beginning. Everything is explored, including your very own birth. In these contexts, I often adhere to the Jungian philosophy of representational archetypes in storytelling. I have heard of people recalling their own births before, quite sincerely, but I can’t help but assert that’s not quite the norm. Yet that’s how this story starts.

The first few segments of Brante’s childhood are playful and pleasant. As the trials of reality in this weird world set in, they are rescinded on the way to a life of servitude and suffering. The world in which Brante lives is very harsh. This is not an obstacle to its enjoyment though.

I should warn you, this game is very graphic. People are frequently being punished with intimidation or violence, and a couple of times the gameplay made me a little uncomfortable. Stories need to have conflict, some need it more than others, so honestly, it is one of the things that makes this game so meaningful, but also the choices you can make to protect yourself and the ones you love during git.

Theme and Context, Something New

I started the game with my selected character goal of being receptive to a higher power. and managed to maintain that set of ethics up until I realized I was actually getting quite attached to the characters. I only played this for 90 minutes! And the characters were so important. I lied to protect everybody in the family. This is not too different from my own convictions. It’s good to be a good citizen, but if you turn in Brante’s own mother for a stat point, your character probably doesn’t have much integrity.

Things aren’t great, but you learn a lot. Eventually, your father gets notice that his own father, another nobleman, is back to return to their house. This guy is no Grandpa Joe, no, Gregor Brante is a complete jerk, I hated him. The only redeeming aspect is he proves that the noble aristocracy is as evil as you suspected, but also will prepare you for a lifetime of… suffering. Joy.

There is an important factor which I haven’t talked about yet. This is the theological element of the game; or pantheistic, however, you want to phrase it. The description of the game on Steam describes the world as a place where the gods are real. It’s more like a paternal and maternal combination of gods in the world. The game is frame by frame, so you won’t think about it much, but the entire world is bordered by a giant pillar of light at all times. This is the source of the two twin gods that caretake the whole world. Obviously not Earth by the way!

Onward into The Life and Suffering of Sir Brante

No corners were cut in producing this visually gritty game world. It will play heavily on your emotions if you play it most likely, but I am also quite sensitive to emotional topics–and observational! You don’t have to play it as a perceptive stat; I think you could probably have fun screwing around with the dark on this one, but you may be forced to contemplate your actions. And the whole world is out there to treat you like scum. Some characters are truly spirit-warming though.

I do not know where the story goes after chapter one. The story is broken up into life stages, chapter 1: childhood, chapter 2: adolescence, that sort of thing. I leave that to you dear gamer. Hopefully, Sir Brante gets justice, but you’re probably going to have to fight for it with your heart.

I can only imagine you will probably have lifetimes of playtime if you choose to play it that way. I forgot that I wasn’t Sir Brante by the time I was done! At the very least, do yourself a favor and check out the demo. It is an interesting production, and I think this one is definitely worth your time.

Thank you sincerely for reading MrDavePizza, I update frequently so check back. And you can also find me on social media!