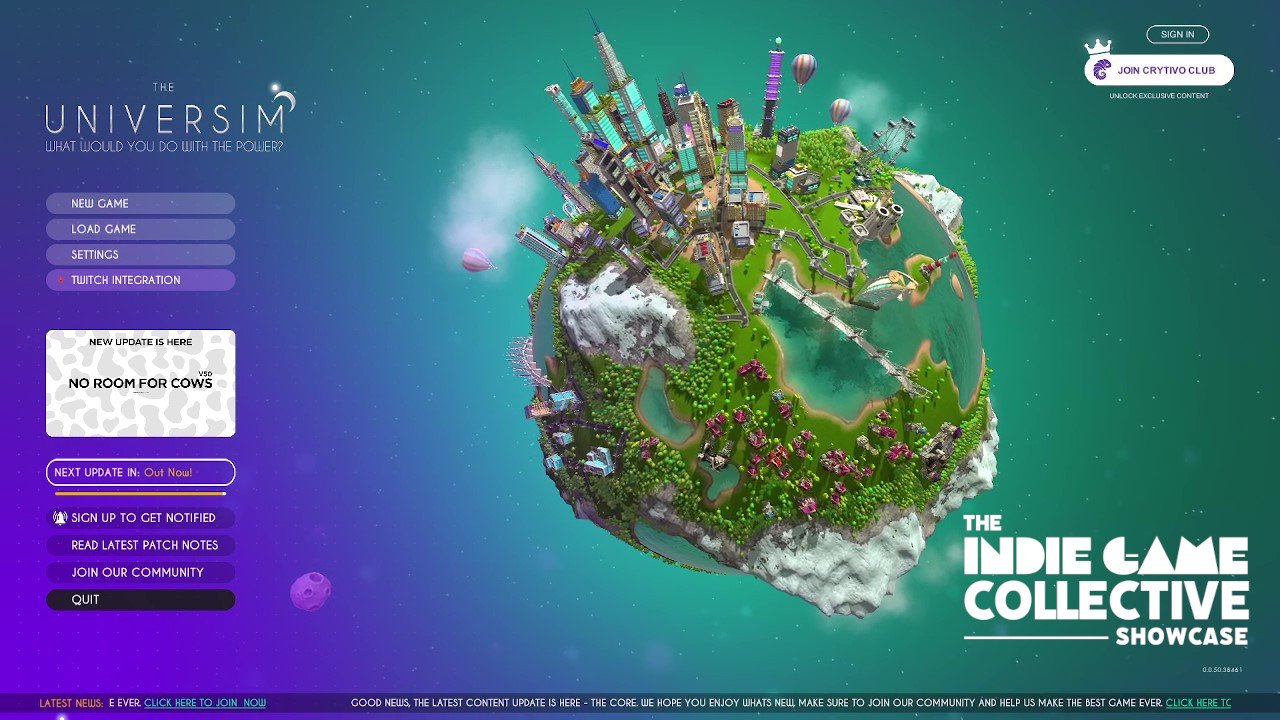 The Universim is a civilization simulator from Crytivo that combines features from planet sims with more advanced skill trees. The game touts a robust planet-level environment with the ability to manage the course of civilization from primal to advanced stages.

The game is still in development but is going through a rigorous beta, although you can purchase early access on Steam, which many have. I’m kind of reminded here of experiences of other sims out there, but I saw some things I haven’t seen before too. Thanks to the collaboration between my friends at Indie Game Collective and Crytivo, I’ve obtained an early access copy and am here to tell you about it. So here we go.

Ray, When Someone Asks If You’re a God…

You might be hesitant about video game omnipotence like me. Others eat this up. Neither is wrong. A lot of us have played SimCity and The Sims. There are games from my youth like Black & White also, which is a very unique deity series that thrilled every fiber of my being. Go with me then, when I say there’s something new here.

Overall, if I had to compare, I’d probably say The Universim is somewhere between Planet Zoo and Spore, at least as far as gameplay. The emphasis on evolution with the skill trees Planet Zoo work with the kooky alien creatures vibe of Spore. Those are a couple, but honestly, there’s a little of every sim out there is part of whats’ going on here; I can tell you that from experience.

Beyond these comparisons, the game is very lighthearted and silly. I can’t profess to know precisely how long the Hitchhiker’s Guide to the Galaxy-style narrator comments throughout the game, but he certainly has some humorous observations. It’s good that he does too because he’ll give you tips on what you need to work on.

Math, Science, History, Unraveling the Mysteries of The Universim

The Universim boasts some unique features. Such as the distinct autonomy of your subjects. Sure, you can send a disaster, but the human spirit is untameable–or nuggets, as they’re called. Apparently, you can tame wild beasts in this game too. Helping your nuggets evolve has a lot of options.

Of course, you’ll need the basics, to begin with, like natural resources, shelter, food, and fire. It takes no time at all, however, to jump straight in with a water pump or a shopping center or whatever. It doesn’t have to be realistic, because it’s all about options. And naturally, the more advancements you make, the more sophisticated your civilization becomes. Eventually, at least it’s being developed, and you’ll be able to take your nuggets into space!

Community Of The Universim

The community in the early access of The Universim that’s still in progress is absolutely huge. People are creating conversations around every aspect. I think any indie game project with that much independent support has high prospects. Crytivo has said that they plan to continue working on the project until they are satisfied with the final product, but that production time is estimated, for now, in the 12-18 month range as of this summer. So keep an eye on it. Or jump in now with their early access!

What I’ve assessed from the community announcements from Crytivo is there’s still a lot ahead for The Universim. Fans have been wondering if the game will evolve to a space-age level and Crytivo has announced they’re working on it. So, this is promising.

If it makes it this far, it will be the contemporary Spore dream fulfilled. Not that any game needs to be superior to every other game, but lots of sim players have dreamed for ages of a one-stop-shop for world sims. Additionally, I’d say there is a whole new generation of sim players now as well, which is going to be interesting.

I Have to Go to My People

Yep, there’s a community of nuggets and a fishing pier that need tending to. It just turned winter. Wait they need some tips on reproduction. So I better get going. What can I say? It’s a living.

Thank you so much for reading Mr. Dave Pizza. There is so much to explore here. I’ve recently made some updates to the navigation that make it A LOT easier to find things, so please have a look around! And enjoy.

Also, thank you again to Crytivo, they have some of the best-looking games I’ve ever seen.