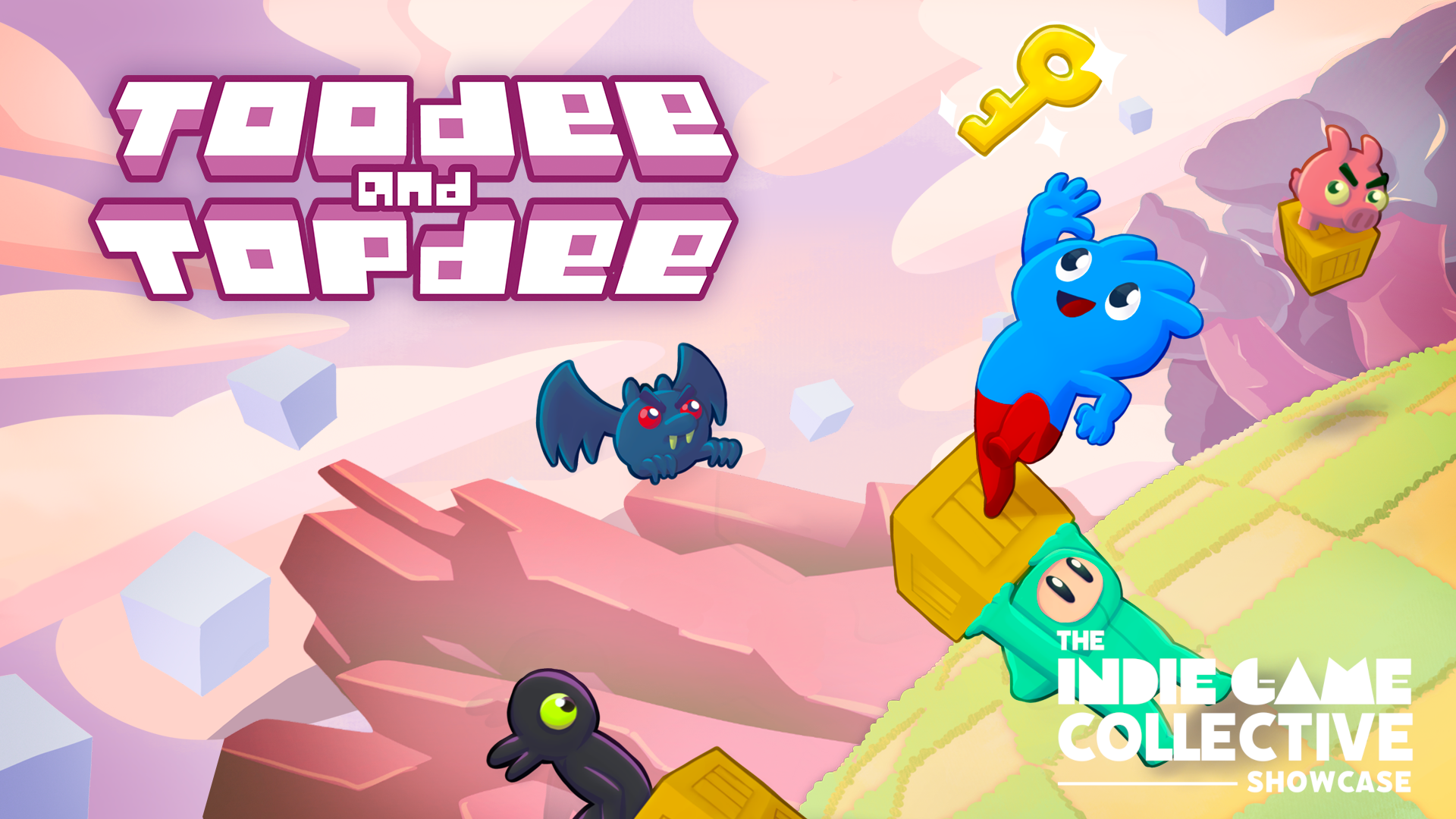 Toodee and Topdee is so far one of my favorite platformer concepts that I’ve ever tried. A while back I did a documentary review that talked a bit about the game Fez.

While much different conceptually, they both have a neat mechanic that combined 2D platforming with shiftable perspectives. I’m not sure how efficiently I can describe this concept without getting into some straight-up academic theories involving geometry, so be sure to watch the video, but suffice it to say it is really, really neat.

Plus anybody can play! The game has a compelling intro with a demagogue world-merging backstory, and each level is a platform with locks and blocks, in what I want to say is kind of like the super old school game Chips Challenge mixed with Portal. I have some exciting thoughts on this, so let’s get started.

This showcase is created in collaboration with Indie Game Collective and the makers at Dietzribi.

When I saw the trailer, I knew that there was something here. I did indeed mention Fez above, but Toodee and Topdee is more about thinking about how to move two characters. Each one is dependent on the dimensional realities of the other character. The name of the game actually represents the names of the two main characters in the game.

Toodee is, naturally, bound to the 2D universe, and Topdee is bound to a top-down perspective, or more accurately a kind of isometric perspective. When shifting between these dimensions, you can use one to push a block up and down by walking and pushing along the wall or jump from block to block like a conventional sidescroller.

Although the character Toodee seems from the beginning like more of an innocent bystander as opposed to the ingenuity of Topdee, they are neither really superior to the other and each is equally important in solving the puzzles. Every puzzle is solvable, though they become more and more difficult. You might notice the approximate location in the solar system of the universe at the beginning, which is absolutely massive and excitingly so.

Here is a list of features from the developer press kit:

●Toodee and Topdee is a 2D Platformer and a Top-Down Puzzler hybrid.

●Switch between Toodee and Topdee and their unique perspectives, and watch how the game bends to the rules of the current genre.

●Overcome hard-as-nails challenges in the precision platforming sections of the game. If you’re having a hard time, you can modify some of the game rules in the difficulty settings.

●Meet strange friends on your quest to find the missing semicolon and return the balance to the universe.

●Afraid to go alone? You can play with a friend in the local CO-OP mode.

●And don’t tell anybody… There are secrets…

Some Tips and Tricks

I play platformers pretty regularly these days based on what’s out there. I try very hard not to get stuck or game-over because of my personal no-cut capture approach to gameplay videos. This has improved my skill and also made me realize that gaming has a translatable skill in problem-solving.

In almost every game you’ll ever play, there is a solution to the objective. Same here in Toodee and Topee. It does help here to have a chat with the helpers in the beginning areas of the game. Their role disappears pretty quickly but is consistently relevant. Suggestions from them like knowing that you can pull or push objects are quite helpful and will help you later. Crumbling blue platforms, locked away keys? These ones I lucked out on thanks to decades of playing Super Mario and a healthy Windows 3.1 history of the classic puzzle game Chip‘s Challenge. Just keep going!

There are many things here that are new to me. If you can stay on your toes, you’ll start solving these puzzles so quickly you don’t even need to think it out. The whole idea that your characters exist within different dimensions is so beneficial to the problem-solving aspect that you’ll start seeing the connections of “Oh yes, you can solve it this way,” or “Wait, this might work.” I really love this game for this feature, it’s unique and fresh.

I think this game has the potential to become a classic. It has retro appeal with unique mechanics.

This game has an appeal for science geeks like me too, particularly the theoretical variety–and math nuts too actually. I’ve been fascinated by visualizing these concepts for years. Anything bending time or space-time is generally a big draw for me. A good entry point for Flatland readers too, which shares some ideas here.

This is a great indie game for anybody and I encourage you to check it out, and if so make sure to go to the Steam link below! Act now and you can get $2 off.

Thank you so much for reading Mr. Dave Pizza today. I’ve got new game showcases four days a week now! So, if you enjoy what you read here, please have a look around as much as you like. I have recently organized things to be a lot more accessible and will continue to do so, so you’re sure to find something interesting! Have an amazing, awesome day! Big Pizza out.