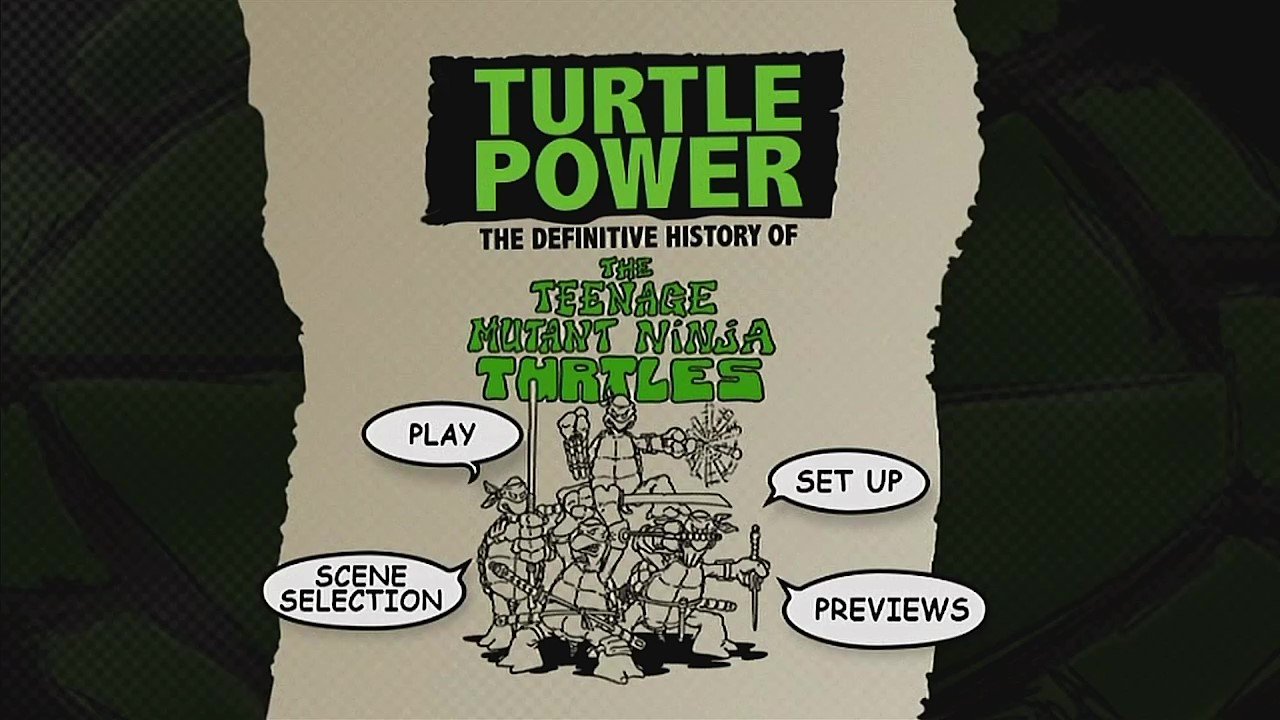 Turtle Power: The Definitive History of the Teenage Mutant Ninja Turtles is a DVD documentary from Paramount Pictures, released in 2014. It covers every topic of TMNT lore like the comic book origins of Mirage’s Kevin Eastman and Peter Laird. Or how uncomfortable the turtle suits were for the actors in the motion pictures released in the 90s.

Teenage Mutant Ninja Turtles is one of the most legendary hallmarks of the later 20th century and beyond. From the adults whose childhood thrived on the cartoons and movies to the fervor of today’s initiated youth. Almost everybody knows of them and most likely is cool with them in some form, maybe even have a favorite turtle–mine’s Donatello. Anyway, I took up the bo staff of this cultural journey and I’ve got some gems for you right now.

It’s pretty safe to say that rare geeky documentaries are pretty much my favorite genre at the moment. I saw this at the library, so I had nothing to lose. I have been listening to a podcast about TMNT called Shellheads for some time with Sergio and Jeff. It’s always been my understanding that there is a lot of backstory to the turtles tracing back to the original comics, but I did not realize how freaky a phenomenon they became even as a homegrown product. It’s a wonderful story about how independent artists can hit it big if they strike the right chord.

You might make the leap that TMNT sold out when Turtles went big. This is not that scenario though. Everybody loves the turtles. Even now, maybe even more. That’s a major theme in the documentary.

It’s kind of like “I love this idea, but what is this even.” If you’re not too familiar with the TMNT lore, it’s a story about four teenagers (or turtles depending on your chronology/source) who come across a mutant ooze that turns them into large muscular turtles.

They learn the art of ninjutsu from their sensei Master Splinter, a mutated rate who learned the art from his master. Or something like that, it doesn’t even really matter, but that’s the gist.

These types of stories tend to inhabit a plague of dysfunction and disagreement. While the two main creators, Kevin Eastman and Peter Laird are very much opposites in personality with Peter being more soft-spoken and serious & Kevin brasher and party-dude, their energy works for the turtles.

The opposing forces are pretty common in the turtles day to day scuffles. They have compared Peter to Donatello and Kevin to Raphael. It’s very appropriate. The spirit nature of TMNT is abstract at most, but this is a very major Taoist force as well.

The friction really only seems to arise in the subjects of the documentary who really didn’t know what the turtles were or even care. The producer of the original movie was a bit scathed by the production, although it was a hit.

The voice actors of the original cartoon share stories about learning they were going to do voice work for something called “Teenage Mutant Ninja Turtles.” Oh, also did you know that Uncle Phil from Fresh Prince of Bel-Air did the voice for Shredder! What! He talks about the role in a later scene. And the guy who does the voice for Krane is freaking hilarious, I love his part in the film too.

I really liked the section about the toys. Everybody knows the turtle toys, cause there is a bazillion of them. A lot of them weren’t around forever or even really had much to do with anything anywhere! I’d argue the vinyl toy scene we’ve got going on today, which I am a partaker of, has its origins in some of these turtle toys.

I mean it’s a hunk of plastic that looks like mutant rotting garbage people in radical colors. SIGN ME UP! I really do love these toys. I have to restrain myself from getting any, but there are turtle artifacts scattered around my office and I need more!

That’s actually one of the interesting things about TMNT. Most of us are aware of the cartoon and toys above else, but the cartoon was actually created for the sole purpose of selling toys for Playmates Toys. And it definitely worked.

They sold more action figure toys than in any other history. After the show was successful, the original plan was to dump it and stop production. The representatives of the show loved it, however, and it was picked up again for its own sake. I’m glad too cause that’s about where I got hooked!

Turtle Power: In a Nutshell

I need to avoid writing these massive reviews of DVDs, but it’s so easy to talk about topics of interest. I think this was a very good documentary. It certainly had an air of trying to tell stuff at times, but it was factual and interesting.

In 2014 Turtles Issue 1 had its 30th Anniversary. I don’t know when this was filmed, but Peter and Kevin do make an appearance for this celebration.

I like the information it is accessible in this documentary because it is mostly about how a fun idea can change the world. We’re all about that at Mr. Dave Pizza, so this is just totally radical. If you are into turtles and want to know exactly what the origins are, maybe you want to read the comics or something or learn the lore, it’s all here.

I enjoyed reviewing this very much, and I hope you enjoy what’s here. I want to thank you so much for reading MrDavePizza.com and if you like what you see, have a look around! Time for ‘za.