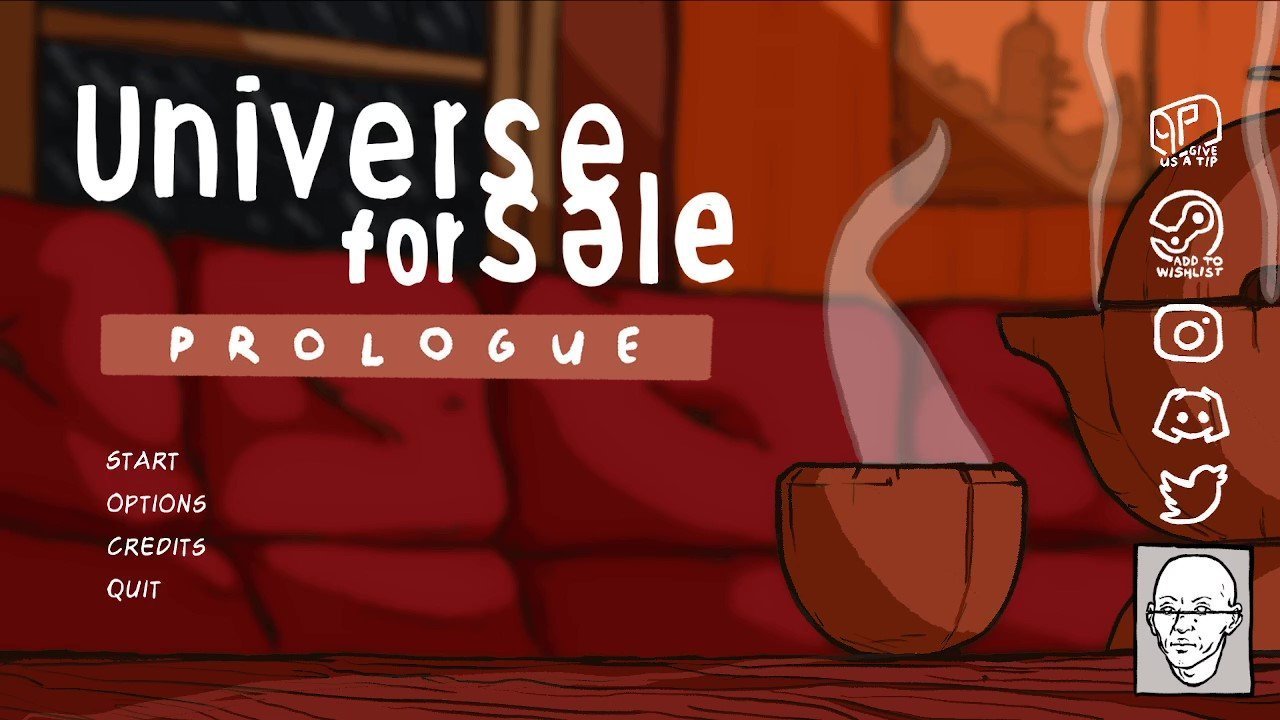 Universe for Sale is an upcoming title that combines sci-fi themes and metaphysical themes into a quirky and compelling visual novel/interactive fiction. I already do not recall the main character’s name, and neither will you, as the shroud of mystery is an important part of this introduction. He is a self-described “cultist” with a floating head who drops into a tea shop on Jupiter to meet with a young lady named Lila. The prologue sets up a story involving Lila’s special gift to create mini-universes! Hence the game title.

The first thing that pops out of the screen of Universe for Sale is the brilliant art direction. The intro very unexpectedly starts with Lila young being ready for a story before bed. That cuts to a zoom-in of a highly stylized hand-drawn Jupiter from outer space, and it truly sets the mood. Oh, I just checked. This cultist is simply referred to as the mysterious cultist. He appears hooded in the scraps some structure, a space station, or somewhere. He goes in and pulls down his hood. Shadow is replaced by an incredibly shocking floating skull.

You’d expect a character like this would then next raise a sword and draw lightning through it, but this character is rather timid. Or at least he was for me because this is how I guided the interactions he has with the innkeeper and the strangers of the bar. Most importantly though, with Lila, a young woman with green hair fused with suction cup tentacles that are aloft her head rather casually.

Universe For Sale: It Is What It Says

After drifting through tables filled with aliens and cyborgs, you take a seat at the middle table. Lila shows up. The chatter runs for a bit then you talk about the tea. It is an interesting topic to delve into because the concoction entails a rather sci-fi-like explanation of the sifting and separating of the herbs and ingredients. The whole prologue is not quite Star Wars, but sort of Robert Heinlein. Man, I hope I didn’t mess that one up, it’s been some time since I’ve cross-referenced Sci-Fi. It also reminds me a bit of my friend Willy Elektrix who is an expert on this stuff and creator of Superstorm Melon Date.

Next is the crux of the story. Lila begins to demonstrate completely visually how she can create mini universes out of her tea. It sounds kind of psychedelic or something. But it is compellingly explained with relativity, quantum physics, and a touch of irreverence. The cultist’s enamor at the possibility of the creation of beings in these universes which Lila dismisses slightly cryptically before placing a circular universe back into her teacup. The cultist wants to buy them… I think.

So, this is a PROLOGUE, basically a demo, it’s still in development. I always prefer a visual novel pre-release called prologues. It gives me an idea of what to expect from it. That is it generally covers one major scene. And that is what’s in this one. I really love the stylistic choices as I mentioned, since they give a very heavy graphic novel vibe. It’s a novel interface for a conventional visual novel/interactive fiction because the choices and responses are fluid and animated. It’s almost on board with a short film the way everything coalesces is so nice.

I really enjoyed this and I’m looking forward to seeing its release. I can already tell it has potential. Hopefully not so much that its artistic genius is lost on gamers, but check it out! It’s going places, like other planets.

Thank you so much for reading MrDavePizza.com. I really take a look at all kinds of games here. And occasionally other topics, so have a look around and read as much as you like. Thanks for stopping by!