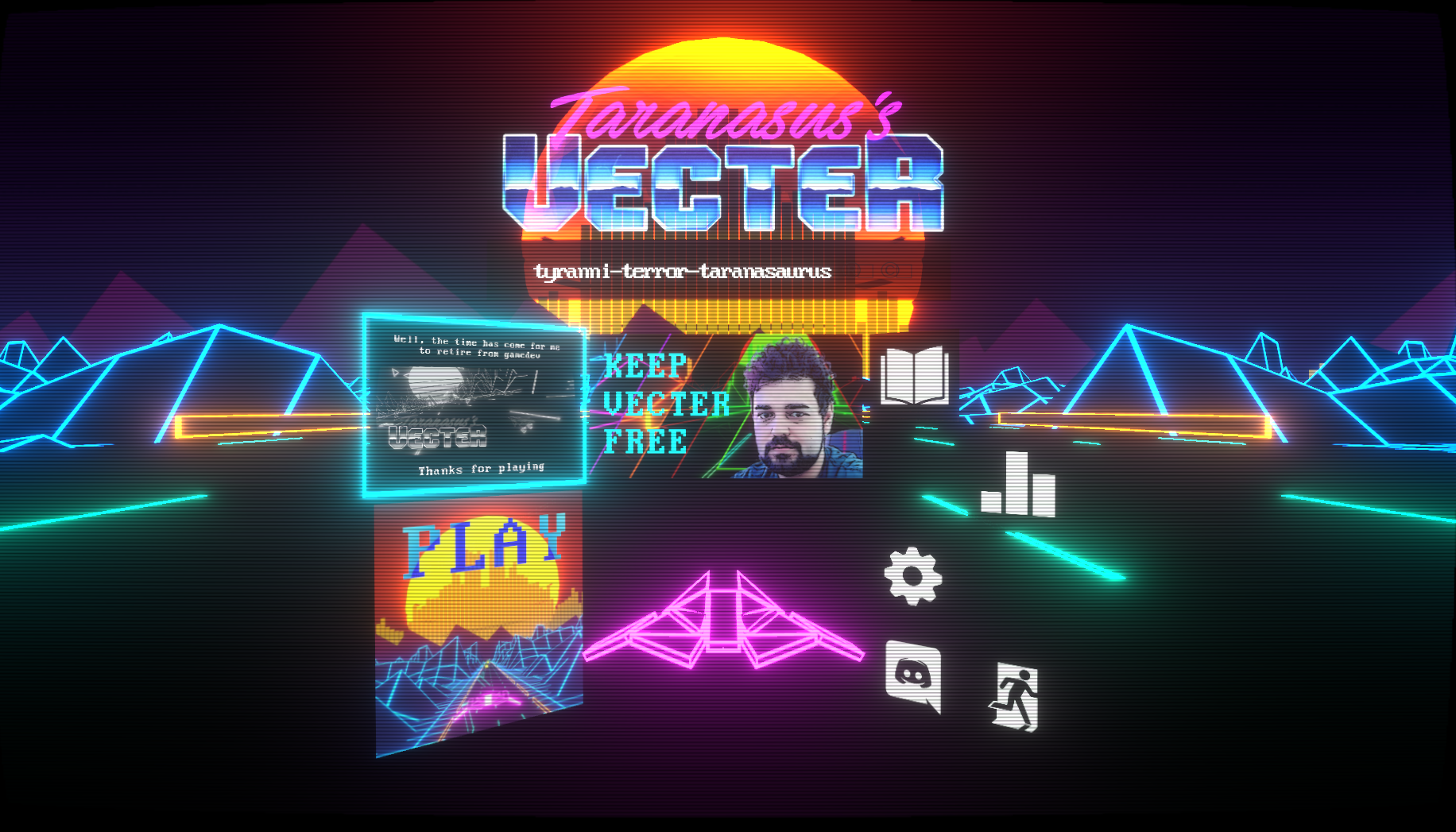 Vecter is a free racing game available on Steam from Taranasus. The game is a procedurally generated vector-based graphic racer/flyer with a catchy background. It has thousands of overwhelmingly positive reviews on Steam.

It has recently come to a conclusion and left a legacy of the power of free games and participants from an adoring community. Up until April 3rd, 2021 the game was served with constant improvement and imaginative gameplay. It is still available for free on Steam. It has also left a legacy of inspired indie developers who have created their own games based on it, which is expected to continue moving forward.

I have been in an unusual mood before picking up this game today. With a backlog the size of Rip Van Winkle’s beard, I had a lot of games to choose from. There is a need for balance though, so I’ve got something different for you this time. Do not ask to see the rough draft, haha.

This past month, I’ve discovered several evolutions of procedurally generated racers beyond your basic light-cycle TRON sim. Mr. Dave Pizza is an observer looking in mostly, but there is a project many of these other projects can trace back to called Vecter–no I did not misspell that.

Vecter was an indie racing project involving neon vector design with wildly fun gameplay. The creator who worked on it for years only somewhat recently decided to move on from the project. It’s an interesting artifact within the Steam Community’s history of interesting personalities. I played it to appreciate the context, as you’ll see from the video above, although I do not know if that project will ever have more content.

There are of course some development studios that have created exhaustive attention to every detail and feature, aka 80’s Overdrive on Switch. It’s a genre that is flexible though and really lends itself more to the artistic style and theme than the foundational mechanics of gameplay. Some are with a floating spectrum of realism or direct attention given to lighting and shape ahead of representation

I’d like to think that I could play Vecter nonstop. The way it is procedurally generated and various obstacles and boosters, like moving from ground to sky or flying upside down on a blue neon wave; these things are what make games have lots of replay value.

In some, it comes at a cost of story development, but with a racing game, heck yeah. There is something for everybody out there… (mutters: besides indie monster trucks–make it!)

I do not think this dev’s completion of the project is a sorrowful event, they’ve obviously created something totally amazing that tons of people love. That’s an adequate description of success in the game dev world.

If you’d like to check it out, I have a link below to the Vecter demo. They’re both totally free, so I think you’ll be able to judge for yourself.

In the meantime, thanks for reading MrDavePizza.com. I review all kinds of games but primarily indie. Feel free to look around as much as you like.