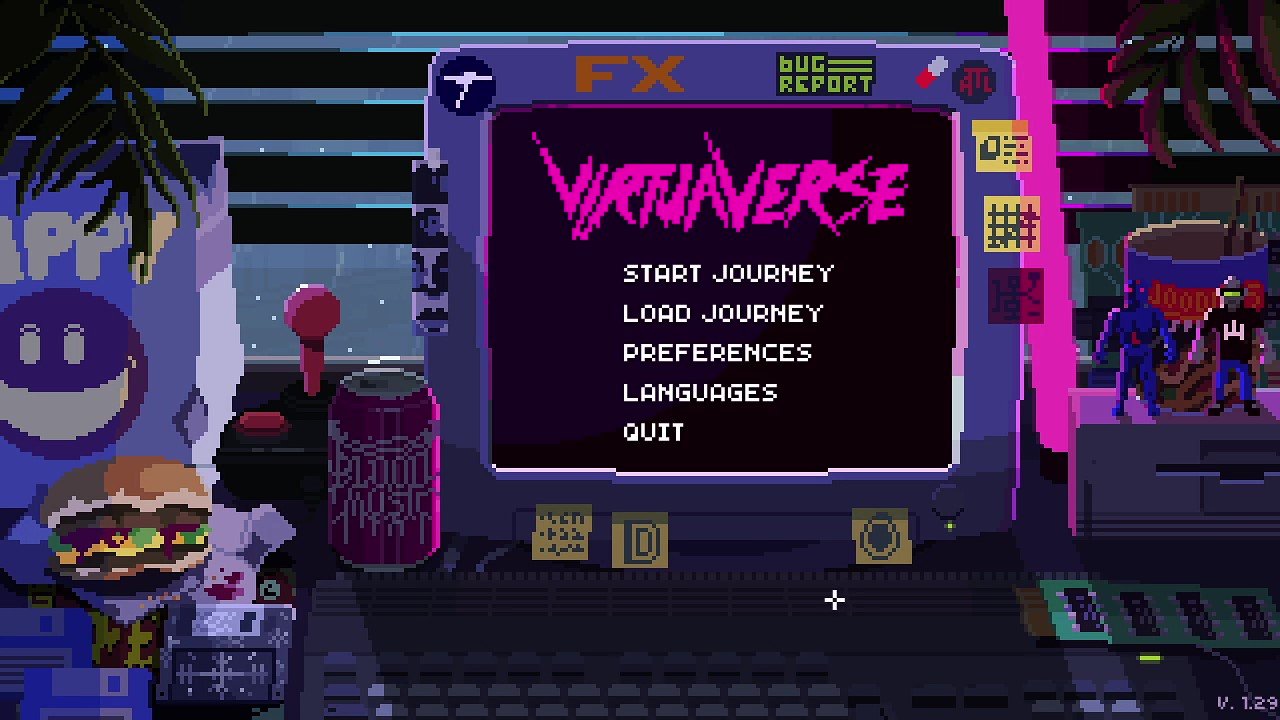 VirtuaVerse is an indie cyberpunk pixel art point-and-click adventure that exudes what some might think of as classic cyberpunk. You, a hacker named Nathan, wake up in your apartment, to which your girlfriend has changed the exit code. Stylistically it appeals to an aesthetic of a disheveled, neon glow surrounded by cybernetic paraphernalia. Solve enigmatic puzzles to progress the story.

I meant to try this game around the time Cyberpunk 2077 came out, maybe as an indie alternative. That was before I learned there was a demo so that I could see what was in store. After a conversation online about 2077 today, I see this enormous opportunity.

So let’s plug in and drop out.

If you’re unfamiliar with the cyberpunk aesthetic, it’s a very specific sub-genre of science fiction that involves, usually, dystopian themes of cybernetic technology, augmented reality, and out-of-control capitalism at the expense of society.

I know I already wrote an essay on cyberpunk in my essays section, but this one might narrow down the variables, plus focus on Virtuaverse.

I really enjoyed VirtuaVerse because it exploits something that developers are still catching up on. That is, creative freedom means that when it comes to satisfying a range of gamers, aesthetic style and intention are really the key factors. It seems to be more important than ever.

Photorealistic graphics and mission play can be a heavy burden on developers, but it doesn’t need to be. This game is full of pixel art. This isn’t necessarily easier but is a lot more accessible for really indie projects. Also, it just looks awesome.

I have a cyberpunk Pinterest board I keep active every once in a while–note to self–where I collect cyberpunk art. It is truly amazing these days to take something you’ve imagined for decades, like reading Neuromancer in 2005, to seeing 2D art that totally excavates all the small niches and fiction-inspired cinematics into a specific theme you grasped at.

I’m telling you, maybe it’s just an age thing, but I had no idea that creative media would ever make it this far. And I’m pretty forward-thinking. Actually, cyberpunk is the one that made me think that. Ironic.

I really don’t mind poking around for a while in puzzle games, because although I’m not good at them, I do occasionally get into the mood of the game. Sometimes I make a horrible guffaw, however, and just can’t find the clue because I’m not thinking outside the box.

I wanted to play as much of this as I could, so I checked out a walkthrough and made my way through it.

Just for reference, I’m linking a walkthrough by Indie James. This walkthrough is 6 hours in length. For an indie pixel art adventure, that is insanely full of content. https://www.youtube.com/watch?v=PIaJvwSLxEE

I really wanted to go that far, but maybe I will. You see, when you’re a gamer or collect hobbies as I call it, you start wishing for things to exist just so you can see how awesome they are and because they are immersive. Sometimes it happens, and a lot of the time, it’s really different than what you imagined but in a good way. I’ve definitely gotten on my knees and cried “We’re not worthy!” with certain games.

If you’re a medium-level cyberpunk nerd with familiarity with the early 90’s/80’s themes of the genre, this game is probably for you. I found it very immersive and accurate without too much hokiness.

All sci-fi seems to have a little cyberpunk these days because let’s face it, futurism fades. That’s perhaps one of the most interesting things about cyberpunk for me because it exaggerates the current stage of the world so much that it seems almost realistic. Just look at this last year, or any year really.

You can interact with almost everything in the game, whether to look or interact. Movement involves shifting to the left or right or clicking on directional waypoints. Some objects you find will help you interact with other things. Don’t be surprised at the possibilities, because you might have to use that nootropic brain of yours and get a little creative.

One thing that’s really cool about this game is it doesn’t involve combat or shooting, at all as far as I can tell. This is a wonderful achievement, because so many games go directly to that mechanic, and second because the aesthetic is really more important in VirtuaVerse. Neon rain, weird hacker stuff, lots of Japanese food, and motorcycles. Cyberpunk is for aesthetists.

I think this game would probably be most exciting to play for a pixel artist or appreciator of pixel art. I have looked at it enough to realize this game is a masterpiece. (6 hours!) Every single space for stuff is used by something that you can interact with in one way or another. That is really cool. Perfect for the overload vibe too!

If you get stuck, just check out that walkthrough I listed above. Whatever your level of puzzle proficiency, there’s something for you in this game if you are interested in cyberpunk or sci-fi. This perspective on this game was made possible by William Gibson, Phillip K. Dick, Neal Stephenson, and Bruce Sterling. So you can always start there too. Or Bladerunner.

P.S. The machines might be taking over. Prolly not though.

This game is on Steam, there is a demo, be sure to check it out!