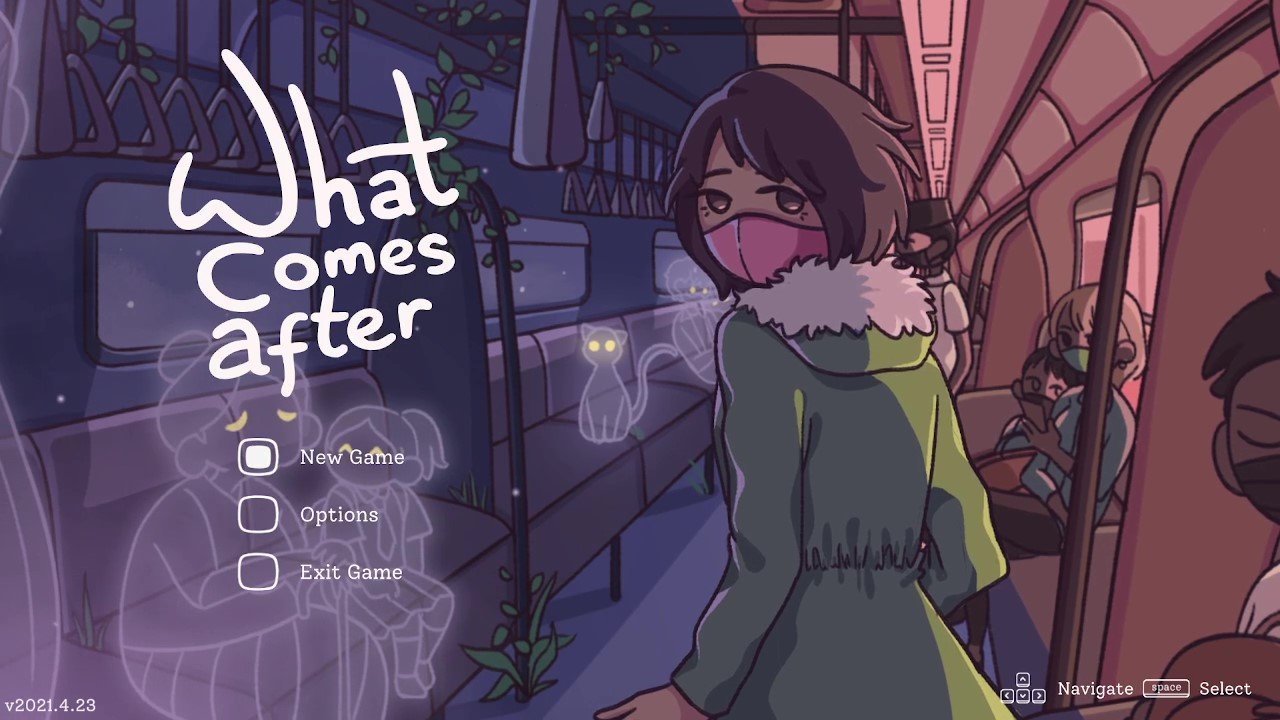 What Comes After is an interactive fiction from the creator Coffee Talk in collaboration with the Rolly Glory Jam. This story-rich game takes place on a pandemic-era commuter train that transforms into a ferry for souls to the afterlife after Vivi falls asleep. There’s no set directive, but the game is experienced through interacting with souls on the train. This ranges from average folks to owls and trees! It is a highly creative and somewhat mystical story that explores deep concepts of purpose and life as well as what comes after.

What Comes After: What Is It?

As a preface, I think its considerate to say that I’ve categorized this game in my mind as a pandemic game because every living character on the intro commute is wearing a mask. This does not necessarily really have to do anything with that topic at all though after about 3 minutes.

This is a game about the afterlife–sort of. More specifically it’s about a “ferry” of sorts to the afterlife in the form of a commuter train that the main character Vivi falls asleep on. It has a strong indie art style with stylistic choices similar to other popular visual novels/interactive fiction with a touch of some Tim Burton-esque montages here and there. It all adds up to a really nice presentation for this story.

I have to admit, although there was a time when it fascinated with it, this topic is actually a real phobia for me. I go out of my way to not think about it. That doesn’t mean I think it shouldn’t be discussed. It’s probably one of the most important topics anybody can ever talk about. And this game really doesn’t make it too creepy. I felt there were some really beautiful concepts in this mostly-dialogue game. For example the conversation with a tree about the seasons of life-loving every being. I euphemized that a bit, but you should get what I mean. Not to get too deep into it, but I felt something in my heart during this part.

I have to assess that the mystical elements of this game after probably very Eastern-influenced. Maybe a touch of new-age sentiment. I didn’t get around to talking to every single entity on the train, but I picked a few intriguing prospects to get a feel for it all. You might be shocked at who shows up on the train actually. It’s an inclusive trip! And it has a lot of borrowed concepts from classic storylines involving spirits of all natures!

The Beautiful Art of What Comes After

The one thing I really took from this game was not just a beautiful sentiment but a beautiful game! Everything just looks perfect with hues of purple, blue, and pink in the shadows. Plus any other apropos pastel that can make its way onto the screen. It did remind me a lot of the beautiful art from Coffee Talk, which I’m glad about. It was really kicked up a notch for this heavily thoughtful work.

A few modifications and this could have been kind of creepy, but everything feels very calm and grounded. The people on the train are at times a bit deep in thought but there is no true morbidity or fear in this theme. This feels very anchored to me. If I dare say, it kind of reminds me of the Miyazaki film Spirited Away.

I certainly don’t have the answers and I only enjoy these types of stories for their novelty, but their value is entirely up to the observer. As far as games that are rich and story and cheaper than a matinee, it’s highly worth it. I highly encourage any gamers hesitant about the story to not fret and give it a try if it sounds interesting. For me, it was so much more than what I expected, and I’m glad.

Thanks a ton for reading MrDavePizza.com. I’m pumping out these reviews regularly, but there is so much content on the site that I encourage you to have a look around! Enjoy, and happy gaming.

The Beggar's Ride is a Terrific Old Indie You Should Know AboutJanuary 4, 2021
Scarlet Hood and the Wicked Wood is Weird But GoodApril 8, 2021
Subscribe
Login
0 Comments
Inline Feedbacks
View all comments