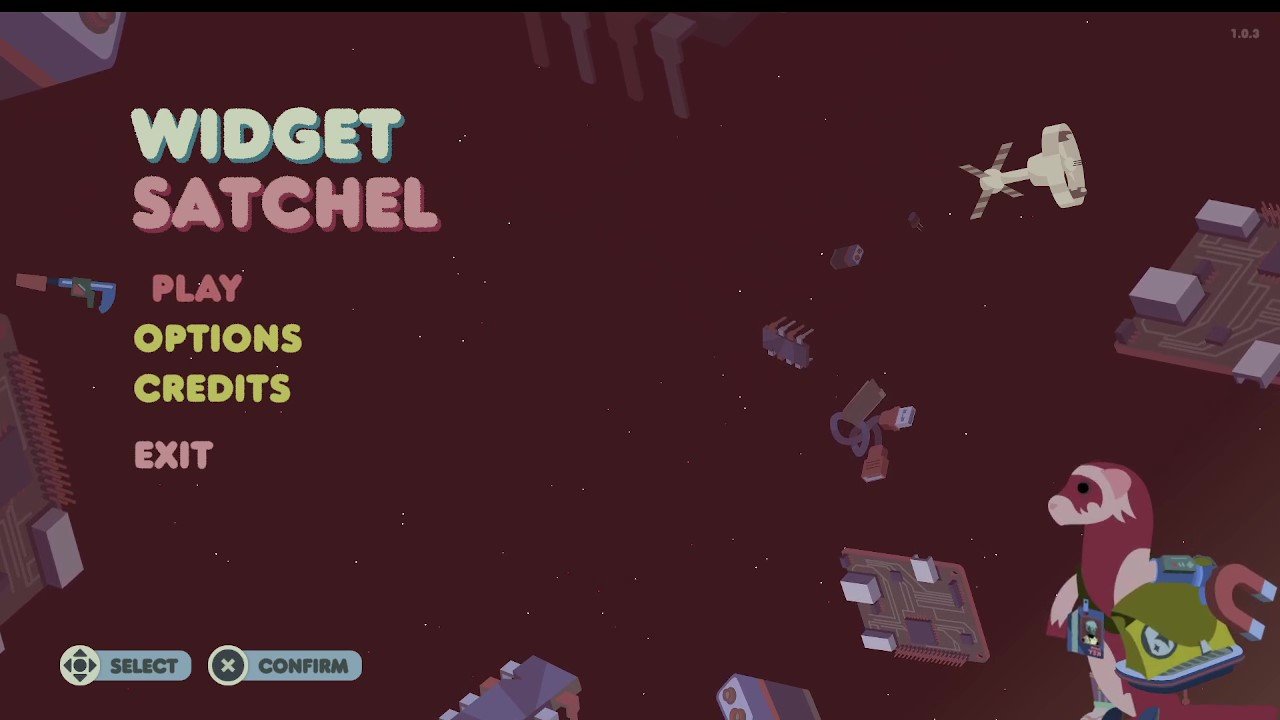 Widget Satchel is a cross-platform indie platformer out a couple of years but is still very fun and fresh. It’s also a great project from Mark of Nice Games Club, which is a podcast I listen to from time to time. It is currently available through the Itch.IO Palestinian aid bundle. Widget Satchel is a delightful flat graphic style game, where you play as an adorable ferret upon a space station. You start off with a satchel and explore junk-filled levels and build things. There is no game over or way of getting hurt, but plenty of challenging scenarios to try things out. Let’s have a look. It’s a rogue-lite essentially.

One thing I immediately love about this, aside from there being no way of messing up, is how smooth the gameplay is. There is no clunkiness or lag, everything runs perfectly as if it were an Apple Arcade title. I think this is probably due in part to intentionality, but also why it’s available on every platform. The flat graphics and minimal intrusion make everything flow nicely.

You might not totally know what’s going on in the beginning, but basic game intuition will lead you forward. All the junk everywhere is what you’re supposed to collect and failed at attempts to gather broken monitors and cogs. The real items seem to mostly be circuit boards and computer chips that hover in the sky above platforms and elevators. After you complete a level, there is a large furnace jutting down from the ceiling where you can cash in your junk for the gear you can use like jumping boots and a swatting stick.

As the description says, there is no real way to game over, so these items enhance gameplay to personal preference.

This is a very simple game. Simple games are often some of the most fun! Not unilaterally, but as a jump-in and get-going context, there’s a lot of fun to be had here. And the art style is clever but, again, very unintrusive.

One thing to also mention is “mischief points.” These have no game-changing importance but you can rack them up if you want to knock as much stuff over as possible. It is kind of fun tossing around all the junk everywhere too. You can also speed run levels if you want a challenge that is amusing to watch.

I realize this review is a little bit shorter than usual. The game is pretty neatly packaged, with no loose ends to tie together through the power of reductivism. Cheeky remark there. Really though, it is what it is, and I laud it for that! On this one, the screen captures and videos the job.

That’s It About Widget Satchel

This game bracket is in the general price range of your stand indie platformer, I think around $15 or so right now. I think that Widget Satchel seems a good fit for the Nintendo Switch, which it is available on eShop. It’s also on PC, PS4, and Xbox though too, which is pretty impressive! If you recently purchased the Itch.IO Palestinian Aid bundle for $5, it’s on there too. It is kind of nice it is on there actually, because I have been wondering what gems lie in some 1,000 games on there.

Anyway, if you are interested, be sure to check it out, I’ll leave the itch.IO link below, and you can have a look if you like. It is also on Steam. And ALSO: I just realized a little later here that this game was produced by none other than the creator of one of my favorite podcasts. Nice Games Club. A podcast for game devs, check it out!

Also, though it is no longer the total domain of my site, this game is very family-friendly, and I highly recommend it in that context!

Thanks for reading MrDavePizza.com. I’ve started posting really frequently lately, four times a week, so check back and, please, have a look around!

If you’re looking for the game, it’s here: https://noblerobot.itch.io/widget-satchel

The Gardens Between Was a Beautiful, Interesting Indie I PlayedJanuary 13, 2021
A Bird Story is a Classic Indie You Need to Know About NowJanuary 8, 2021
Subscribe
Login
0 Comments
Inline Feedbacks
View all comments